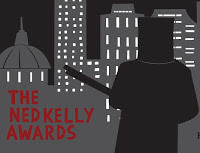 The Australian Crime Writers Association have recently announced the shsortlists for the 2013 Ned Kelly Awards. They are as follows -

The short list for the Deanston Crime Novel of the year has also been announced and will be given out Bloody Scotland.   The 2013 shortlisted titles are:

The Deanston Scottish Crime Book of the Year award winner will be announced at a gala dinner during the Bloody Scotland Festival on Saturday 14th September, and presented with a trophy and a cheque for £1000.