Michael Russell on History as Mystery 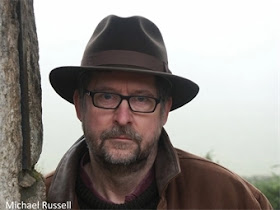 Someone once said that by the time any novel is published, it’s already ‘historical’. A weary complaint about how slowly publishing wheels grind, but the historical novel is a much-loved genre, and recent years have seen a remarkable growth in historical crime fiction. I’m now writing a seventh story about an Irish detective, Stefan Gillespie, set in the 1930s and 40s. The books take a sideways, sometimes wry look at World War Two from the perspective of Ireland, which remained controversially neutral, while providing British forces with tens of thousands of volunteers and secretly working surprisingly closely with British Intelligence.

The reasons for Irish neutrality, some inevitable, some understandable, some less so, form a web of contradictions in a country scarred by civil strife and, in the early years of the war, facing invasion by Germany or Britain, possibly both at once!

Such contradictions, as well as the fog of war Stefan Gillespie encounters not only in Ireland, but in Britain, America, Spain, and Germany too, are part of why finding new things to write about a war that has produced more fiction than any other is possible. But real storytelling is not in the sweeping panorama of history. My novels do involve espionage at times, and they do engage with what war means, in ways both trivial and tragic, but it is in the ordinary business of ordinary lives, and yes, ‘ordinary’ murders, that true stories are told. Stories of individuals in extraordinary circumstances, and often in circumstances not so extraordinary.

But why history as mystery at all? As writers it’s a way to write uniquely about what obsesses us and fascinates us. The link to the past is deep, and fiction gives freedom to explore it in quirky, unexpected ways. That doesn’t mean leaving facts behind, just looking at them differently. There are alternative histories (Robert Harris’s still wonderful ‘Fatherland’), but historical crime readers expect historical history! They are well informed and leap on any mistake. To persuade them to enter your world and inhabit it, you can only invent on firm foundations of fact.

The things I invent are often pedestrian. The most unlikely events are almost always real, often small things historians have no interest in. When Stefan Gillespie stays at the Irish College in Salamanca, at the close of the Spanish Civil War, only the seminary’s archives provided the coincidence that it was the HQ for German Military Intelligence. Such serendipity is probably the experience of every historical fiction writer. When I needed a police raid on an upmarket abortion clinic in Dublin in 1935, I had no idea such a clinic existed. Not only did it, but the Austrian who ran it was a German spy. Almost too much coincidence for fiction!

But the appeal of historical mystery isn’t a particular time or particular facts. It’s our intimacy with the past that matters. In Powell and Pressburger’s 1944 film ‘A Canterbury Tale’, on the eve of D-Day, Thomas Culpepper gives a lecture to some soldiers, about the Pilgrim’s Way and the Kent village they’re camped near. The soldiers are waiting for the pub to open. They ask why they should care what happened six hundred years ago. Culpepper’s reply isn’t about great events or figures, but the houses we lived in as children and how our grandparents lived.

‘There are more ways than one of getting close to your ancestors… follow the old road and as you walk, think of them. They climbed Chillingbourne Hill like you today, they sweated and paused for breath, like you. And when you see the bluebells in the spring and the wild thyme, and the broom and heather, you’re only seeing what their eyes saw. You ford the same streams. The same birds sing. When you lie on your back, and watch the clouds sailing, you’re so close to those people you can hear the thrumming of the horses’ hoofs, the sound of wheels on the road, and their laughter and talk. And when I turn the bend in the road, where they saw the towers of Canterbury, I feel I’ve only to turn my head to see them behind me.’

The ‘old road’ is any road, anywhere. Mine stretches through the Wicklow Hills to the uplands of Dorset, along the Thames into London, across the plains of East Africa and the foothills of Kilimanjaro, through Corfu’s woods to Homer’s wine-dark sea. We’re on a road not less but more travelled-by. Our lives are richer for it.

But Thomas Culpepper missed something. He didn’t hear a faint gasp, or the cry from the trees as a knife slipped between a pilgrim’s ribs. Historical crime fiction is your opportunity to travel back in time and remedy some murderous omissions... 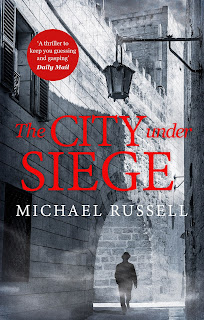 The City Under Siege  by Michael Russell (LittleBrown) Out Now

1941, and Detective Inspector Stefan Gillespie is ferrying documents between Dublin and war-torn London. When Ireland's greatest actor is arrested in Soho, after the brutal murder of a gay man, Stefan extricates him from an embarrassing situation. But suddenly he is looking at a series of murders, stretching across Britain and Ireland. The deaths were never investigated deeply as they were not considered a priority. And there are reasons to look away now. It's not only that the killer may be a British soldier, Scotland Yard is also hiding the truth about the victim. But an identical murder in Malta makes investigation essential. Malta, at the heart of the Mediterranean war, is under siege by German and Italian bombers. Rumours that a British soldier murdered a Maltese teenager can't go unchallenged without damaging loyalty to Britain. Now Britain will cooperate with Ireland to find the killer and Stefan is sent to Malta. The British believe the killer is an Irishman; that's the result they want. And they'd like Stefan to give it to them. But in the dark streets of Valletta there are threats deadlier than German bombs...