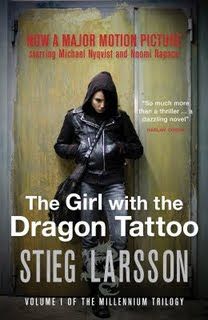 As the release of the Swedish Version [with English subtitles] of ‘The Girl With The Dragon Tattoo’ is fast approaching; Stieg Larsson’s name is back in the media spotlight.

I do love a conspiracy theory, and of course the early death by heart-attack of Stieg Larsson has provoked the theory that he was actually killed by Neo-Nazi elements. This theory has been widely refuted, but another conspiracy theory is reported by the BBC today –

Kurdo Baksi, who worked with Larsson on the anti-fascist magazine Expo, and who had known him since 1992, has just released a book entitled My Friend Stieg Larsson. His suggestion that Larsson was not a leading light of journalism has proved controversial in Sweden. "Many people are angry," says Baksi. "He is a god in Sweden."

But the controversy over Baksi's book may be dwarfed by the storm generated by another old colleague of Larsson. Anders Hellberg believes there is no way Larsson could have written the prose in the Millennium trilogy.
He worked with Larsson at the TT news agency in the late 1970s and early 1980s when Larsson was a designer. He edited the text that Larsson produced to go alongside graphics and he was not impressed.

"To write is a kind of talent. You can learn up to a certain level to write. Stieg in my view could not have written the novels."

Hellberg, who made his revelations in an article in Sweden's leading newspaper Dagens Nyheter on Friday, does not know for certain who else may have written the novels, but he said it might be plausible to suggest Larsson's partner Ms Gabrielsson, an architect, played a big part.

"Stranger things have happened than two people [where] one does the plot, the research, the story and the other one is writing. She has written a lot in underground papers. She is a very good writer, I've been told."

There is no evidence that Ms Gabrielsson did any of the writing, admits Hellberg. It has been suggested that her contribution to the work was proofreading and assistance on description of architectural detail. But it is not clear why, if Ms Gabrielsson was responsible for more, she would not have already made it clear. Her forthcoming book may make her position on the matter clearer. Ms Gabrielsson was unavailable for comment.

Hellberg has also been on the receiving end of fan ire for his theory.

The reaction from my fellow Swedes and also some others is quite angry. Normal Stieg Larsson readers don't like this. I've committed some kind of crime to raise the question. Some of the mail is not pleasant."

The idea that Larsson couldn't write and therefore is not responsible for the prose in the trilogy is dismissed by others who knew him, like Anna-Lena Lodenius, who worked with him on a book about neo-Nazis in the early 90s. "When we worked together he wasn't that good in the beginning but that was a long time ago," says Lodenius.

"If you read the books you can hear his voice. It is like he is next to you. It is his words, his expression. You can hear it."

She does not think it strange that someone with little track record of writing fiction could suddenly turn out a series of bestsellers. "He read an enormous amount of crime stories and true crime. He was very interested in female writers like Sara Paretsky [who created the character of VI Warshawski].

"I was maybe a little bit surprised that he was able to write this kind of thriller, books that you can't put down. He learnt by reading I think. For me it's quite obvious that he was a good writer."

Though the last paragraph is the stuff that fuels conspiratorial thoughts –

“A man, approaching middle age, and with no track record of writing fiction, knocks out a trilogy of thrillers, gets a publishing deal, but dies before being thrust into superstardom.”
Posted by Ali Karim at 18:40