Well my decision not to buy any more books did not last very long. In fact it did not last 24 hours. I managed to miss the first panel I had a feeling that I would. I did not manage to get up on time. I ended up having breakfast with other Shotsmag members, Mike Stotter, Ali Karim and Kirstie Long. 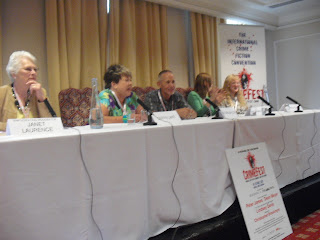 The first panel that I went to was An Affair to Remember: A Walk Through History, which was moderated by Janet Laurence. The panel members were Deryn Lake, Shona MacLean, Carola Dunn and Steven Saylor. It was a really good panel and like all the previous panels that I have attended so far very well attended. One of the questions that the panel members were asked was what drew them to the period that they wrote about. For Carola Dunn it was the increase in freedom for women that appealed to her. Shona MacLean explained that for her as a historian she found her training helped her. However, she also explained that her editor sometimes felt that it was a hindrance. Steven Saylor explained that he loved the history of Rome and that he series grew out of his fascination of the ancient world. For Deryn Lake, her character came about as a result of some research that she had been doing on behalf of a drinks company. The question of how morals fitted into their stories was also discussed. Shona MacLean explained that for her character it was difficult, whilst for Carola Dunn her character Daisy Dalrymple has she explained her own morals and sometimes they did not equate with everybody else’s. Steven Saylor said that he did in fact have to tone down his material because of the somewhat foulness of the language during the period. There was a very different mindset.

The second panel that I managed to get to was I was a Male Warbride: Confessions of a Crime Fiction Author. This panel consisted of Chris Ewan, Douglas Lindsay, Helen Fitzgerald and Steve Mosby along with Donna Moore as moderator. Panels moderated by Donna Moore are always a joy to attend and this was no exception. We had confessions coming out of our ears from the various panel members ranging from the panellists worse reviews, most embarrassing events that have taken place in their lives and whether or not they had in fact done anything criminal. I am sure you would like to know which author tried to steal a lamp post, which author used to catch a train without buying a ticket, and which author managed to embarrass himself in front of his future in laws quite spectacularly. However, I am not telling! It was a really interesting panel and the audience members were in fits of laughter but I am sure that if any of the members of the panel learnt anything it was that Donna knows too much about them and that they should be wary as to what they say to Donna Moore as it would most likely always come back to haunt them one way or another.

Lunch was good fun. I ended up going out to lunch with Sam Eades from Headline, Kirstie Long, Helen Fitzgerald, the delightful Christopher Wakling and Katherine Armstrong from Faber who kindly paid for lunch!

Even though I was not sure which panel I was going to attend, I some how managed to miss both of the panels first thing after lunch. They were None but the Lonely Heart: The Lone Wolf P.I Notorious: Making People Shiver. I did attend The Last Laugh Award Shortlist Panel. Robert Lewis who has also been shortlisted was unable to attend. It was once again a highly amusing panel, and Donna Moore made sure that she got the best out her fellow panel members who once again elicited and which was moderated by Donna Moore (a shortlisted author) and included Colin Bateman (who won the award last year), LC Tyler, Chris Ewan and Colin Cotterill fits of laughter from those in attendance. It will be interesting to see who wins the award as they are all worthy winners in my opinion. 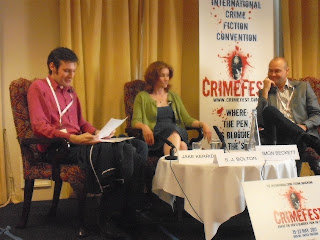 Watching S J Bolton and Simon Beckett being interviewed by Jake Kerridge was really good. It was a shame that it was up against Born to Be Bad: The Nature of Evil as it could have done with more people in attendance. The only other issue that I would comment on was that I would like to have seen Jake ask the two authors slightly more probing questions. However, one of the questions that did get everyone talking was how did they feel about the BBC television programme on genre fiction which has as I am sure that many of you are aware caused a quite a furore. Whilst Simon Beckett was in my opinion rather sanguine in his response, S J Bolton was quite firm in how she felt. She was one of the signatories to the letter that was sent to the BBC in complaint.

Anyway, this blog is running late at the moment. I have to go and get changed for the Dagger announcements that are due to take place around 5:30pm and then dinner with the every lovely Nicci Praca from Quercus Books. Should be good fun!