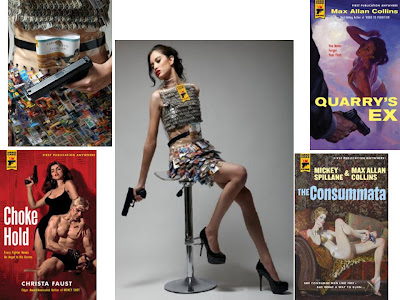 It is getting rather exciting for the British Publisher TITAN BOOKS re-launching Charles Ardai’s Hardcase Crime.

JKP: We’re used to Hard Case Crime titles coming out in old-fashioned mass-market size. Yet I see that your new paperbacks are all in larger, trade size. What gives?

CA: I always intended to stick with mass-market, but the reality of the publishing business right now is that the mass-market business is imploding--it’s almost impossible not to lose money at it, except maybe if you’re publishing the sort of brand-name million-copy sellers that do good business in supermarkets and at Wal-Mart, which our books just aren’t. John Grisham, Nora Roberts, Dan Brown ... fine. But anything below that level (and we’re several notches below), it just doesn’t work.Meanwhile, trade paperbacks are handsome, give a little more room to showcase our cover art, allow us to make the type size a bit larger (which I know some of our readers will greatly appreciate), and so far it looks like we’ll be able to keep the price point fairly modest--just $9.95, rather than the $12.95 or $14.95 or $17.95 you generally see trade paperbacks going for.So, while the change might have been forced on us by a changing market, it’s actually one I’ve come to feel quite positive about. Feels a little weird, like the first time you switch from glasses to contacts (or vice versa), but the result’s nothing to complain about.

Meanwhile as many consider Hardcase Crime “the best dressed paperbacks on our racks today”, so it came as little surprise that it Hardcase Crime are taking their first steps on the catwalk -

Fashion designer Hally McGehean will be premiering her first wearable art collection during New York Fashion Week in a two-part fashion event in the Meatpacking District and SoHo. Among featured designs of the show, McGehean will debut her Hard Case Crime dress. The Hard Case Crime dress is made out of nearly 1,000 miniature reproductions of covers from the award-winning Hard Case Crime line of retro-styled paperback crime novels. The skirt features every cover ever published in the series, including works by writers like Stephen King and Mickey Spillane, while the daring backless top is composed of interleaved copies of the cover of BABY MOLL by John Farris, whose cover was painted for Hard Case Crime by the legendary illustrator Robert McGinnis (whose other work includes the movie posters for “Breakfast At Tiffany’s” and the original Sean Connery James Bond movies in the 1960s). The outfit’s oversized belt features another McGinnis original, his rare horizontal cover painting for LOSERS LIVE LONGER by Russell Atwood.
Photo Credit Chip Miller

In other news, our line's big relaunch begins in less than two weeks -- GETTING OFF by Lawrence Block and QUARRY'S EX by Max Allan Collins hit stores on September 20, and THE CONSUMMATA by Mickey Spillane and Max Allan Collins and CHOKE HOLD by Christa Faust arrive on October 4.

I love Hardcase Crime books! In fact I'm in my second reading of Slide ...which I had to since I read it before Bust and now I'm reading the trilogy in its proper order.