Those of you that have followed and read my previous blog postings on CrimeFest will know what to expect.  Those of you that have not don’t worry!  Be prepared for my postings to run the gamut from the irreverent and the comedic to postings on panels and what I have generally been getting up to over the course of the next four days and whatever other snippets of information I endeavour to remember to post.

This post was actually done on the way up on the train as I made my way down to Bristol from Paddington Station.  By the way, and as aside and I do hope that someone will be able to help me with this, whilst I was at the station waiting for my fellow travel companion fellow Shots reviewer Kirstie Long people were taking photographs of Paddington Bear and patting him on the head as well as they walked past.  Why? I can understand why they would want to take a photograph but why the need to pat him on the head as well?  I am assuming that this was for good luck but am I missing something here?  Is Paddington Bear the unofficial patron saint for travellers?  I thought that Saint Christopher was the patron saint for travellers?  If he is the unofficial patron saint for travellers than my apologies Paddington for not giving you a pat on the head before I left.  The omission was not done on purpose.  I genuinely did not know.  I shall remember the next time I am making my way through Paddington Station! 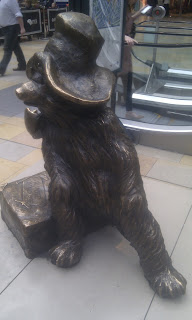 I have been having an umpteenth look at the programme trying to decide which panels I want to attend. Deciding has not been easy but I think I have just about managed to come to a decision.  Luckily, on Thursday they only have one strand of panels taking place. First Stop is going to be They’re All Out To Get You – It’s a Conspiracy which features Chris Ewan who writes some of the funniest crime fiction around at the moment with his “Thief’s Guide to….” series of crime novels.  His protagonist Charlie is said to resemble Gary Grant in To Catch a Thief  and Adrian Magson who not only writes brilliant crime novels is in my opinion one of the nicest crime writers around.  And he did not pay me to say that!  (Pay up Adrian!!!!!)  It should be an interesting panel. Following that I am hoping to attend Killers & Cops: Which Side of the Law are you On? which Matt Hilton who is the author of these tough-guy thrillers whose main protagonist is Joe Hunter who is an ex-special forces officer is moderating.

As much as I like discussing Forgotten Authors, I think I may have to give this panel a miss. I may be dying for a drink by this time if I have not had one already.  I am certainly going to attend the Frederick Forsyth interview this afternoon.  He is this year’s recipient of the CWA Diamond Dagger Award and he is being interviewed by Peter Guttridge. I anticipate that there will be many people wanting to hear what he has to say.  The Day of The Jackal is in my opinion a classic.  I enjoyed the book immensely when I read it many years ago and the original film featuring Edward Fox and a really young Derek Jacobi is one that I can watch time and time again.  Don’t get me started on the remake! My only problem is that I am not that keen on Mr Forsyth’s politics. I am tempted to ask him about them but think not, mainly because I can’t really be bothered.

Anyway, getting to Bristol and the hotel was a breeze.  Checking in not so! The usual vagaries being that the room was not ready despite my long conversation with them last weekend about an early check-in.  What was good fun was bumping into Peter Rozovsky who has the brilliant blog Detectives Beyond Borders.  Peter is doing Criminal Mastermind this year.  Should be interesting.  I shall once again be helping the quizmaster Maxim Jakubowski with the score keeping.