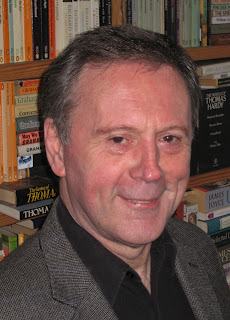 The first of our blogger/reviewers take on Books to Die For is Barry Forshaw.

British critic Barry Forshaw is a writer and journalist whose writing career covers a number of genres.  He is the acknowledged expert on Scandinavian crime fiction and the author of numerous work on films and crime fiction.  He has done documentaries on crime fiction for a number of television stations.  His work includes The Rough Guide to Crime Fiction, British Crime Writing: An Encyclopaedia.  He is also the editor of the well-regarded online crime fiction magazine Crime Time.  His most recent book is Death in a Cold Climate - A Guide to Scandinavian Crime Fiction and his latest book, which is due out in September, is British Crime Film: Subverting the Social Order.  A former Vice-Chair of the Crime Writers’Association.  He also wrote the first UK biography on Stieg Larsson – The Man Who Left Too Soon.

Had Graham Greene (1904-1991) not written the 'serious' novels (such as A Burnt Case and The Heart of the Matter) which marked him out as one of the greatest of all English writers, his ‘entertainments’ (as the author rather dismissively described them) would constitute a body of crime and thriller fiction almost without equal in the field.  Early in his career, Greene introduced an element of the spy story into The Confidential Agent (1939), in which D, the agent of a Latin government (Republican Spain in all but name), figures in a narrative that was clearly influential on such later writers as John le Carré.  The latter has long acknowledged Greene’s considerable influence on his work.  Greene's most celebrated crime novel, of course, is Brighton Rock (1938, with its psychotic young antihero Pinkie), which the author decided to move out of his ‘entertainments’ category.  This sometimes slippery shifting of genres by the author was always a rather arbitrary endeavour: the moral concerns of the thrillers were often precisely those of the more serious books, while the pursuit narratives of the serious books (such as the whisky priest on the run in The Power and the Glory, 1940) had precisely the same visceral trajectory as the thrillers.  However, all the books have that dark and sardonic view of existence, which quickly became identified as ‘Greeneland’, a queasy admixture of the seedy, the surrealistically funny and the dangerous.  Two other crucial ingredients need to be identified in the Greene mix: the author’s uneasy relationship with Catholicism (he converted under the influence of his wife's piety, but was never an unquestioning believer after the fashion of his correspondent and colleague Evelyn Waugh, who chastised Greene for his doubts).  Greene’s work is also distinguished by its frank and realistic depiction of the sexual relations between men and women – not, that is to say, in any graphic fashion, but with an unblinking assessment of the joys and despair concomitant with sexual passion. 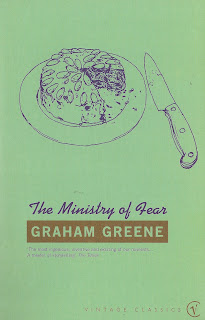 Which novel is the best of his thrillers?  Brighton Rock, with its brilliantly realised picture of a violent seaside underworld, is as strong a starting point for those new to Greene as anything he wrote, but my personal choice, on balance, is the superbly honed thriller The Ministry of Fear (1943), which demonstrates an authority and mastery of the narrative form that makes most practitioners look mere journeymen.  London in the Blitz is brilliantly conjured by the author in this dazzling piece.  This is an ‘entertainment’, but the moral issues here are as rigorously handled as anything tackled by Greene in his more ambitious novels.  Arthur Rowe, full of guilt after the death of his sick wife, is plunged into a dangerous world of murderous, shadowy figures.  The Ministry of Fear is possibly the author’s most sheerly enjoyable novel in the ‘thriller’ vein.  (Fritz Lang made a creditable stab at The Ministry of Fear for the cinema.)

I couldn't agree with you more - I think the "entertainments" often showed Greene at his very best. Another of the early thrillers that I'd thoroughly recommend is A GUN FOR SALE. A classic.