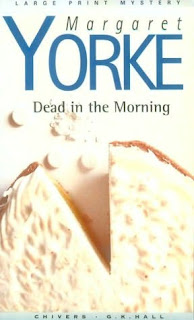 Crime writer Margaret Yorke has died at the age of 88. Best known for her standalone novels her first novel Summer Flight was published in 1957.  Her first book in the Dr Patrick Grant series Dead in the Morning was published in 1970 and introduced readers to her Oxford Don investigator.  She went on to write four more books in the series.  The author of over 40 novels she also contributed to over 20 anthologies.  All five books in the Patrick Grant series were re-issued in May 2012.  Her novel The Point of Murder was made into a TV movie Kiss of a Killer in 1993.

During the war, she served in the Woman's Royal Naval Service as a driver.  She then worked in the libraries of two Oxford colleges (Assistant Librarian.  St. Hilda's College, Oxford, 1959-60) and was the first woman ever to work in Christ Church library.  She was also a campaigner for Public Lending Rights for authors in Britain.

Her works are mostly set in small English villages and feature ordinary people caught up in trouble ranging from juvenile delinquency to marital issues to random acts of violence. 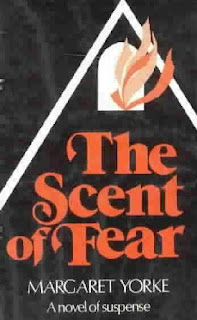 Chairman of the Crime Writers Association between 1979 and 1980 she was awarded the CWA’s highest award the Cartier Diamond Dagger in 1999 for her outstanding contribution to the genre.  In 1982, she also received the Martin Beck Award from the Swedish Academy of Detection for her novel The Scent of Fear (1980).  In 1993, she was awarded the Golden Handcuffs (now known as the Dagger in the Library) by the CWA.  Her novel The Smooth Face of Evil (1984) was shortlisted for the CWA Gold Dagger Award.  Well respected and regarded by the crime writing community, she will be sorely missed.

So sorry and sad to hear this. Wonderful writer and I shall miss her books and her presence. RIP.