Lesley Thomson and The Detective's Daughter 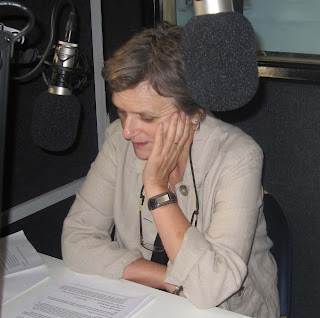 Lesley Thomson is the author of three books.  Her latest book The Detective's Daughter was recently released.

I heard Eric Schmidt, Executive Chairman of Google saying that Google are going to offer us the chance to relive memories as hologram projections. In our sitting rooms this ‘digital memory’ will take us back to ‘how we felt’.  Reality and fiction fused, I thought.

I discovered Streetview about three years ago and until corrected thought it was called ‘Streetwise’. For me, this is more apt because I don’t view the streets, I inhabit them. I’m a dab hand with the controls and swiftly get about. I’m not hooked on social network sites like Twitter or Facebook, despite being a sociable creature, I let the minutes add up to hours while solitary, I click my way along streets, across roads and down lanes.

My first exploration was of a borough in London that I didn’t know where a character in The Detective’s Daughter goes to. I have still not been there, but after clicking my way around it, I feel that I have. My memory of lingering on a grassy verge, negotiating landmarks and making sense of where the park was in relation to houses – hardly varies from my memory of places I have literally visited. After this ‘visit’ I saw its potential for committing and solving fictional crime. Of course this wasn’t new; issues of privacy and security: what to show, leave out or blur, are ongoing with countries bringing in limiting legislation and creating ‘no-go’ zones.  But for a crime writer, Streetview does more than tell me if there are trees or houses in a London square, it takes me there.

I click my way across the city, under railway bridges, along the sides of busy roads without risking being snatched up in the slipstream of the traffic, mugged or worse. It’s always light on Streetview. In ‘Peeping Tom’ Mark Lewis the murderer, captures (and kills) what he sees with his camera. While he is filming the police carrying the corpse out onto a Soho street, a woman demands to know which newspaper he’s with; he has been seen. In ‘Lights Out For the Territory’, which I’ve just finished, Iain Sinclair is stopped by a police officer when he’s photographing a cluster of cameras on a pole in King William Street. Sinclair, or me when I went there recently, can’t move between the tall grey buildings without being spotted on CCTV. On Streetview I walk here and I’m invisible; I leave no footprints. It’s a medium for the perfect murder. The villain can return to the scene of the crime without being seen. Okay so it’s not real time, but then time is a whole other thing on Streetview.

Sinclair journeys through London and step by step outlines his route. I fired up Streetview and joined. He wrote ‘Lights Out’ over fifteen years ago, and many shops have gone, the buildings boarded up or under new management. Some are still there, looking as Sinclair describes. Others while vanished from the high street are on internet directories at the same address. If I hadn’t gone there on Streetview I’d have thought that the florist that supplied the funeral wreaths for the Krays was still on the corner of Roman Road; another kind of footprint.

More information about Lesley can be found on her website.  She may also be found on Facebook.