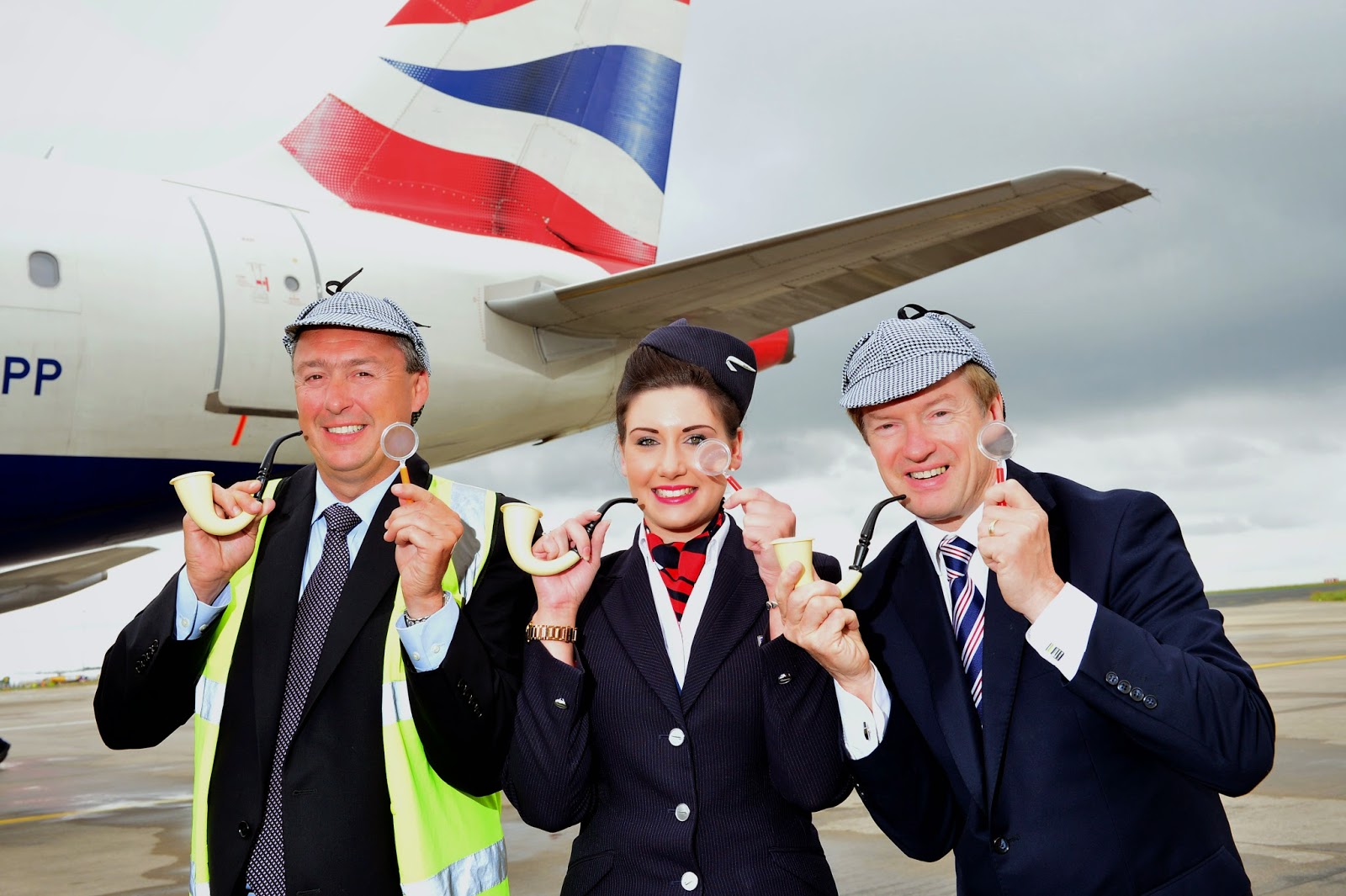 Sherlock fever has gripped Yorkshire as a charity’s campaign to set a new Guinness World Records™ title for the Most People Dressed as Sherlock Holmes has gone viral.

Sherlock Holmes, one of the most popular consulting detectives of all time, is on the case to help raise money for the Yorkshire Brain Research Centre at the Leeds Teaching Hospitals.

The Guinness World Records attempt promises to be the biggest Sherlock party ever. It takes place on 31st August 2014 in Temple Newsam, Leeds from 12 noon. The entry fee is £15 and every participant will receive a Deerstalker hat, pipe and magnifying glass on the day of the event.   The minimum number of people required to set a new Guinness World Records title is 250 participants.

The world's biggest Sherlock party will include a big stage featuring comedy, music, dance, cosplay, circus and theatre. There will be food, fun rides and a few special guest surprises along the way.

Clair Challenor-Chadwick, Appeal Director of the Yorkshire Brain Research Centre, said: “Sherlock is the perfect fit for brain research as the brainiest detective of all time was born in Yorkshire. He is helping us raise awareness of this much under-funded area and to help patients with dementia, epilepsy, Parkinson’s and MS. You don’t have to be a super fan to join in, everyone is welcome to come and help support this crucial cause and the great thing about Sherlock is he’s loved by so many across the generations. It’s going to be a fun family day out, and we’re asking Yorkshire to get behind the event, be part of a World Record, and help the new Brain Research Centre make life changing differences.”

The event has galvanised world-wide support with donations from Chile, France, USA, Canada, Japan and Mexico. Sherlocks have been popping up all over Yorkshire and from around the world on social media, with Sherlock fans posting #sherlockselfie pics to help raise awareness of brain research and the world record attempt. Pictures have been posted from the Great Wall of China, from Australian beaches, and outside 221B Baker Street itself.


Even British Airways and Leeds Bradford Airport are getting on the case.  The best 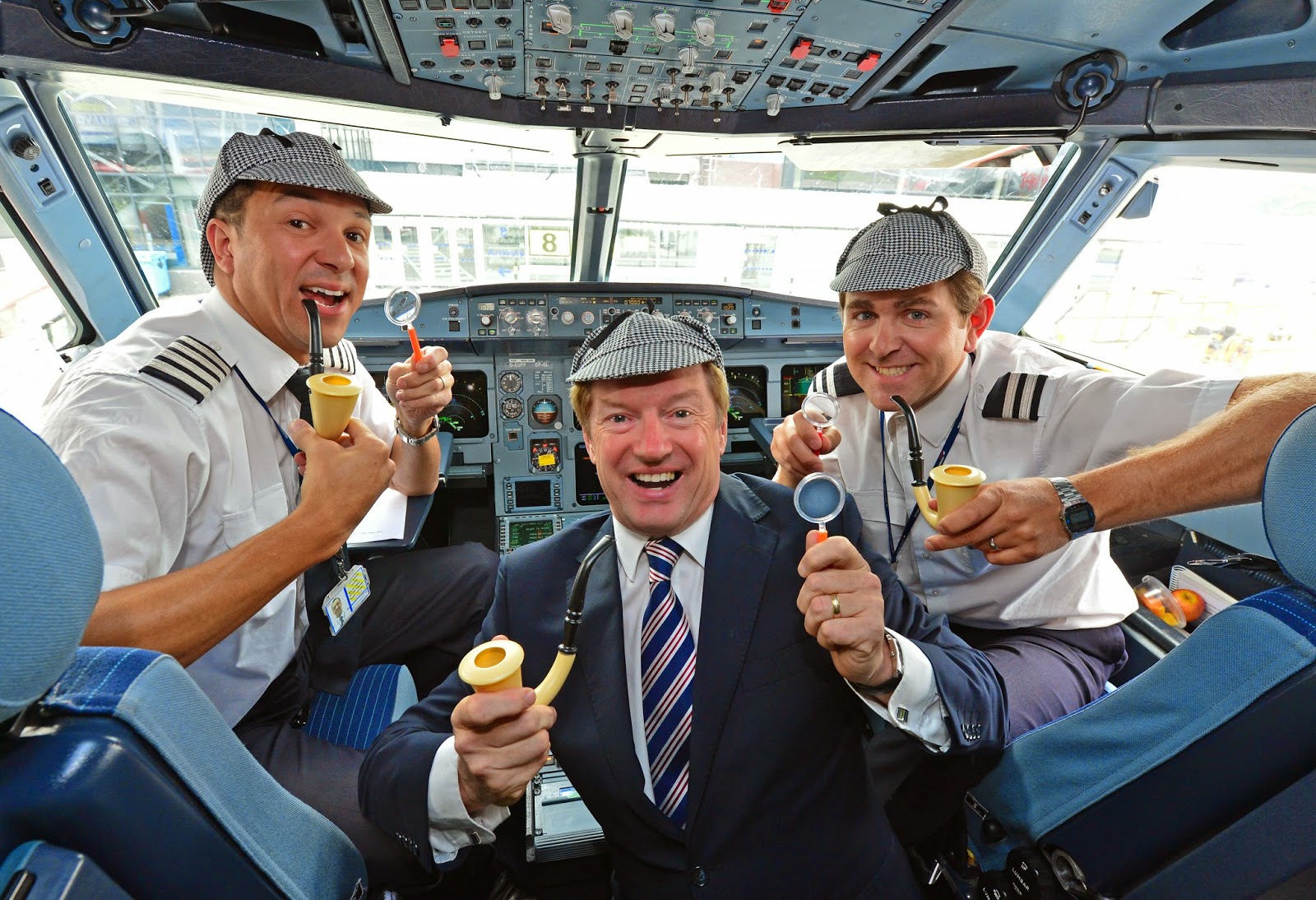 #sherlockselfie pic will win return British Airways flights to London, a night at the five star Royal Horseguards in a river view executive room with breakfast and a visit to the Sherlock Holmes Museum at 221B Baker Street. 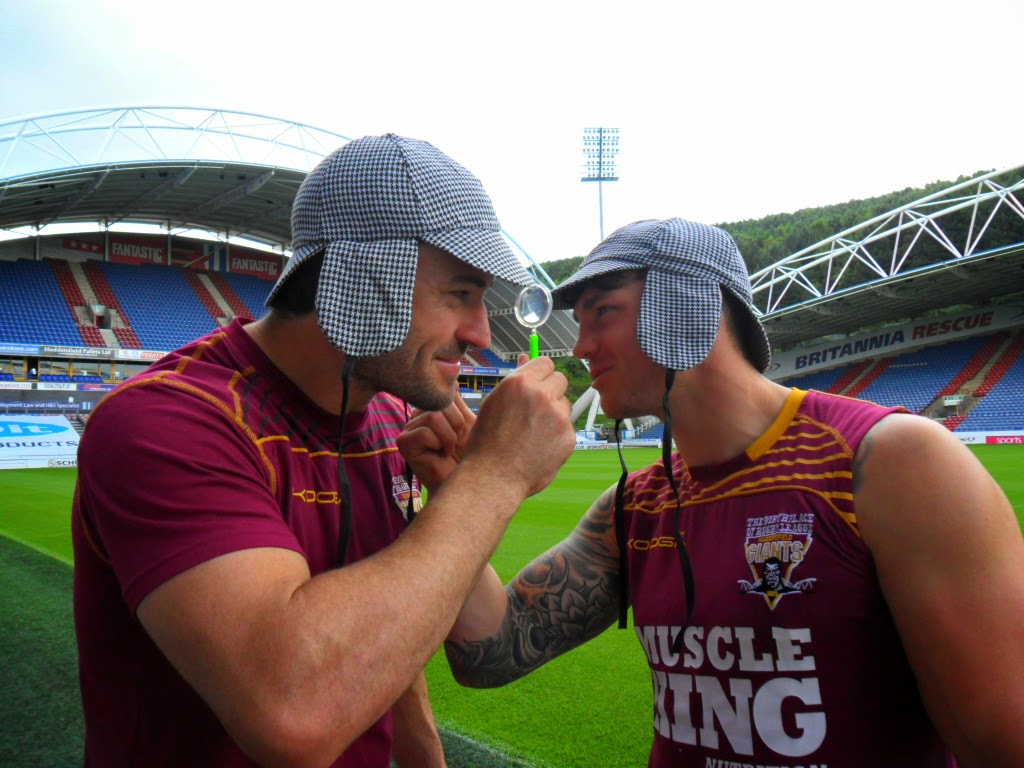 Social media fans are being asked to TEXT BRAIN to 88811 to donate £5 and to nominate a friend.

Clair said: “We have had #sherlockselfie pics from Wimbledon and the Tour De France. There’s going to be a real festival spirit on the day. We’ll even teach everyone a collective Sherlock dance with their deerstalker hats and magnifying glasses to be performed on the day.”

Celebrities, businesses, and sporting stars have also joined the case for Sherlock, with cast members of Emmerdale, players from the Huddersfield Giants Ruby League, and a British Airways Sherlock selfie of pilots and air staff taken in the cabin of a jet at Leeds Bradford Airport.

To register to the event go to www.sherlockworldrecord.com.


Scott Grix and Chris Baily from the Huddersfield Giants looking for clues.
--------

For information about the Yorkshire Brain Research Centre go to www.ybrc.org.uk

Artists in Attendance at the World Record Attempt


Neil Grainger is an Actor and Comedian, starring in such programmes as Eastenders, Judge John Deed, Crossroads and most recently BBC2 sitcom Hebburn in which he played deluded pub singer Gervaise alongside Vic Reeves and Gina Mckee. Born and bred in North Yorkshire, Neil is a proud northerner and thrilled to be presenting the Sherlock World Record attempt for such a great cause.


Re-Wired- Re-wired is an Indie Rock band from Scotland. Their energetic and passionate live performances really make them stand out from the crowd and put on an unforgettable show to their fans. The honesty in their lyrics tied in with punchy guitar riffs complement front man Andrew Nagle’s voice perfectly and are sure to have you on your feet at any gig in which you see them at.

Tom Donaldson Badger-Tom is a young but extremely talented singer and entertainer. He draws his influences from classical and swing music and has a huge passion for musical theatre. Tom loves to be on stage and the confidence he exhumes whilst performing means there is an instant connection between him and his audience.

Max-Massimo Restaino is an amazingly talented 17-year-old singer-songwriter and multi-instrumentalist. You only need to see him once before you can’t help but appreciate his natural talent and hum his songs for the rest of the week. Max is in the process of releasing his debut EP so be sure to follow him at-www.maxmusic.co.uk @maxmusiccouk


Lazuli- Who is Lazuli? Lazuli is a cool and fresh singer from the North of England. Lazuli’s voice instantly cuts through to the fore front and will always leave you wanting to hear more. Lazuli is in the process of writing a whole bunch of new material and really drawing in on who she is artistically. Be sure to find out who Lazuli is at www.whoislazuli.com, www.facebook.com/lalalazuli

Laura Erby-Laura is a 20-year-old singer from Bradford. Laura draws a lot of her inspiration from Soul and RnB music. With her stunning debut EP in the pipeline be sure to follow her journey through Facebook and twitter for all the information. www.lauraerby.co.uk. www.facebook.com/laura.erby.music, @lerby1234


Area 40 Five experienced musicians performing original yet contemporary songs. An eclectic mix of style and content from the several singer songwriters within the band. Songs that indulge vocal harmony with dueling electric violin and lead guitar solos. A melting pot of varied influences and sheer enjoyment of music. Debut CD ‘One Small Step’ released in 2013 and recent Tour De France single ‘Road Trip’ available via www.area40.co.uk and itunes. The band name refers to an area of the brain – Brodmann area40 – an area associated with language and music.


Theatre
Attendees at the Sherlock World Record are in for a real treat when The Flanagan Collective and Harts horn – Hook Productions in association with York Theatre Royal, performs a taster preview of their new production of Sherlock Holmes ‘A Working Hypothesis’ on the big stage.