Ghost in the Basement By Julia Heaberlin

In Julia Heaberlin’s new psychological thriller, Paper Ghosts, the title refers to old photographs that taunt us with their silence. In this essay, she recalls the childhood moment in real life she met a paper ghost she can never forget. 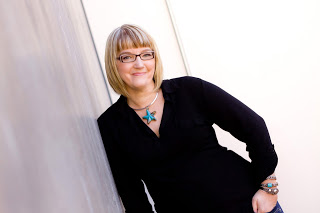 The steps to my grandfather’s basement were steep for a little girl hugging the wall on the way down. His basement was damp and dark, a scary world carved into the side of a Virginia mountain. It sat right above the hell that adults liked to talk about. Things crawled in the damp shadows.

Yet it was one of my favorite places. When I pulled the chain at the bottom, and light scattered the shadows, it was as if I’d entered my grandfather’s brain. Here is where he painted portraits and abstract blobs of color on wooden easels, cleaned guns and camera lenses, enlarged pictures, hung old tools with big teeth.

Here, in an old trunk, is where he stored a grim set of photographs.

When I was a little girl, I wasn’t a particularly brave one. I was afraid of roller coasters, back flips, horror movies, even the wall beside my bed. At night, after my mother turned off the light, I’d bang my fist on the wall to be sure it was solid. I was certain I would slip through the wall while I slept, and no one would know where I’d gone tumbling.

Nevertheless, on once-a-year visits to my grandfather in the Smoky Mountains, I opened the little door off his kitchen and risked tumbling. I wasn’t called by the washing machine, which gurgled down there, too. I was called by his art, by the creepy and intimate chaos, and by a particular little black book, about 8x10 and two inches thick. It was held together with a snap that always made me think twice before I opened it.

It was a book of horror. A book of sorrow. A book of death. Of dead people. And my grandfather was on the other side, looking through the lens.

For a short stint, my Granddaddy, a professional photographer, shot crime scenes and unusual deaths in a rural area. He was called the county morgue photographer. This book was a portfolio of people who left the earth in confusion and violence.

Horror can wash away the picture, they say, but not always the feeling. I remember mostly fuzzy things from secretly looking at that book. A dead man on an autopsy table. A live dog by a body of water. The idea that the dog belonged to someone who went in and didn’t come out.

I remember only one victim with perfect clarity. A young woman, limbs sprawled at right angles on kitchen tile. High heels. Her blood, pooled and black, because it was a black-and-white photograph. The feeling that her husband got away with it.

My grandfather was a wonderful man. He shot documentary pictures of coal mines, sang a twangy Amazing Grace, fostered Eagle Scouts, told dirty jokes, drew snowy scenes in charcoal pencil, smoked rich cigars, wrote letters to me in perfect calligraphy, drank too much, loved so hard he divorced and re-married my grandmother.

And yet he also was capable of shooting a dead woman with a cold and realistic eye.

Maybe he’d take me on his lap and ask: Why did you open the book?

The murdered woman trailed after me when I climbed back up the stairs to the warmth of the kitchen. So did the questions. What was her name? Who loved her? What came before this picture? What came after?

I just had that single flash.

I saw her framed in the calculating, detached way that only the police and the camera—and the killer—ever would.

I was a child. An audience of one in a cold basement.

I will never forget her.

That is what old photographs do. They become paper ghosts. They sink into our souls.

They make us ask questions. But they don’t tell us their secrets.

Carl Louis Feldman is an old man who was once a celebrated photographer. That was before he was tried for the murder of a young woman and acquitted. Before his admission to a care home for dementia. Now his daughter has come to see him, to take him on a trip.  Only she's not his daughter and, if she has her way, he's not coming back...  Because Carl's past has finally caught up with him. The young woman driving the car is convinced her passenger is guilty, and that he's killed other young women. Including her sister Rachel. Now they're following the trail of his photographs, his clues, his alleged crimes. To see if he remembers any of it. Confesses to any of it. To discover what really happened to Rachel.  Has Carl truly forgotten what he did or is he just pretending? Perhaps he's guilty of nothing and she's the liar. Either way in driving him into the Texan wilderness she's taking a terrible risk. For if Carl really is a serial killer, she's alone in the most dangerous place of all ...