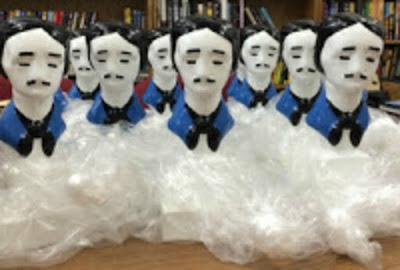 Mystery Writers of America announced the Nominees for the 2020 Edgar Allan Poe Awards, honouring the best in mystery fiction, non-fiction and television published or produced in 2019. The Edgar® Awards will be presented to the winners at their 74th Gala Banquet, on 30 April 2020 at the Grand Hyatt Hotel, New York City.

BEST FACT CRIME
The Ghosts of Eden Park: The Bootleg King, the Women Who Pursued Him, and the Murder that Shocked Jazz-Age America by Karen Abbott (Penguin Random House - Crown)
The Less People Know About Us: A Mystery of Betrayal, Family Secrets, and Stolen Identity by Axton Betz-Hamilton (Hachette Book Group – Grand Central Publishing)
American Predator: The Hunt for the Most Meticulous Serial Killer of the 21st Century by Maureen Callahan (Penguin Random House - Viking)
Norco '80: The True Story of the Most Spectacular Bank Robbery in American History by Peter Houlahan (Counterpoint Press)
Indecent Advances: A Hidden History of True Crime and Prejudice Before Stonewall by James Polchin (Counterpoint Press)

BEST SHORT STORY
“Turistas," from Paque Tu Lo Sepas by Hector Acosta (Down & Out Books)
“One of These Nights," from Cutting Edge: New Stories of Mystery and Crime by Women Writers by Livia Llewellyn (Akashic Books)
“The Passenger," from Sydney Noir by Kirsten Tranter (Akashic Books)
“Home at Last," from Die Behind the Wheel: Crime Fiction Inspired by the Music of Steely Dan by Sam Wiebe (Down & Out Books)
“Brother’s Keeper," from Ellery Queen Mystery Magazine by Dave Zeltserman (Dell Magazine)


The Edgar Awards, or “Edgars,” as they are commonly known, are named after MWA’s patron saint Edgar Allan Poe and are presented to authors of distinguished work in various categories. MWA is the premier organization for mystery writers, professionals allied to the crime-writing field, aspiring crime writers, and those who are devoted to the genre. The organization encompasses some 3,000 members including authors of fiction and non-fiction books, screen and television writers, as well as publishers, editors, and literary agents.

Mystery Writers of America would like to emphasize our commitment to diversity and fairness in the judging of the Edgar Awards. Judges are selected from every region of the country, from every sub-category of our genre, and from every demographic to ensure fairness and impartiality.
Posted by Ayo Onatade at 19:00