Lockdown by Peter May 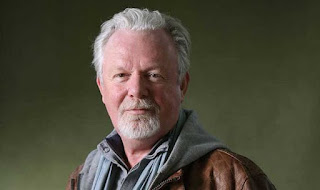 “Lockdown” was the thriller I wrote to save my writing career from financial meltdown fifteen years ago. It failed.


I had spent a year researching and writing a book called “The Blackhouse”. At the time I was convinced it was the best thing I had ever written. Publishers disagreed and it was rejected by every crime editor in the UK.

I turned my attentions instead to the first book in what I hoped would become a series. It featured a Scots-Italian forensics expert living in France called Enzo MacLeod. The title was “Extraordinary People”, and it met the same fate as “The Blackhouse”. No one would publish it. I had spent two years writing these books, spending precious resources on complex research, and failing to generate any income. I needed to sell something quickly.

So I turned my attentions to writing a fast-paced thriller set in London. My knowledge and interest in viral infections had been sparked by research into one of my China Thrillers, “Snakehead”, in which bio-terrorists had isolated and weaponised the 1918 Spanish Flu virus which killed up to 50 million people worldwide. But now I was reading about what scientists were predicting would lead to the next global pandemic - Bird Flu. So I decided to use that as the backdrop to my thriller - not just to thrill and entertain, but to inform and to warn. Because, frankly, if the predictions were to come true, the consequences would be almost unimaginable.

I delved into the research and made a trip to London to recce the locations. A story was evolving, and using the pandemic preparedness plans of the UK and the US, I started to piece together what the social consequences of a pandemic would be in a modern capital city. Complete lockdown. Empty streets. Shops and commercial premises shut. People confined to their homes. A health service unable to cope with the numbers of sick. Crematoria that couldn’t deal with the numbers of dead. It seemed dystopian, and yet everything I read pointed to this certain outcome.

So that became the backdrop to my story, an investigation into the murder of a child whose rendered bones are found on the building site of an emergency hospital under construction in London.

It was a story that took place over just twenty-four hours, and I burned the midnight oil to write it. When I finished it, I had high hopes of finding a publisher. I was wrong.

“Unrealistic”. “Unimaginable in present-day London”. “Too dystopian for a crime novel”. These were some of the comments that greeted me as I tried to sell it. It was the third book in a row for which I had failed to get a publishing deal. Now I really was on my uppers.

Fortunately, I was rescued from complete disaster by two publishing deals in the US which just about kept my head above water.

Then came my major breakthrough. Remember “The Blackhouse”, the book that no British publisher wanted? Well, my French publisher read it, loved it, bought world rights. It was then acquired by Quercus in the UK, and the rest is history. The Lewis Trilogy which that book spawned has sold millions of copies around the world. It is little wonder, then, that I had forgotten all about that “dystopian” thriller set in London.

That is until someone on Twitter about three weeks ago suggested that I write a story set against the backdrop of a Coronavirus lockdown. Suddenly I remembered “Lockdown” itself and realised that I had already done just that.

I mentioned it to my editor at Quercus who asked to see it. He read it overnight. He loved it, and felt that readers should get access to it straight away, since it was such an accurate reflection of what they were living through right now. The manuscript was processed for publication and the e-book became available last week. The paperback will be available online and in supermarkets from April 30th.

I have always believed that popular culture should reflect the world around us, mirror our shared daily experience. And “Lockdown” does just that during the extraordinary times we are living through. The response from readers has been overwhelmingly positive. It is frustrating being confined to my own home, like everyone else, and unable to do anything positive to help. So I have pledged my entire advance to charities and individuals on the frontline of the fight against Covid-19.

Lockdown by Peter May. Published by Quercus Publishing (Out 30 April 2020)

They said that twenty-five percent of the population would catch the flu. Between seventy and eight percent of them would die. He had been directly exposed to it, and the odds weren't good.  A CITY IN QUARANTINE - London is in lockdown under martial law. A hospital is being urgently built by the river Thames to contain the thousands of victims of a flu-like epidemic. Construction is brought to a sudden halt when a leather holdall containing the bones of a child is unearthed from the rubble. A KILLER WITHOUT REMORSE - A psychopath has been unleashed on the city; his mission is to take all measures necessary to prevent the bones from being identified. But why are he and his handlers determined to go to such murderous lengths to hide the origins of the body? A GRIEVING INSPECTOR - DI Jack MacNeil is facing his last day on the force, his career in ruins, his marriage over and his beloved son Jack dying from the virus. He has only hours to prevent the killer from eliminating all witnesses to a conspiracy whose evil effects are beyond belief.