As usual, Ali Karim is first out of the stalls in posting his report on the yearly party held by Penguin/Michael Joseph UK. It's no good me re-telling it here, you're best to nip over to his blog on the Rap Sheet and read all about it.

What he might not know: I spent some time talking with Felix Francis (son of Dick) and he was allowed to divulge the title of their new book out this August - SILKS. Alas, Dick was unable to make the evening.

Peter Guttridge, our one-time film critic was also attending and it turns out that he is a busy little bee at the moment. Not only is he almost finished writing his "Brighton" book, (a modern day Brighton Rock, or so he says) but he has been commissioned by the National Archives to write a book on the Great Train Robbery and spends most of his time locked in a vault in Kew Gardens with only the mice for company.

I met up with Ali, Nick Stone, Charles Cumming, Mike Ripley and Ayo Onatade in the pub beforehand. Did you know that come August, Mike Ripley will be celebrating 20 years of "Angel"? I reckon that Angel is now the longest-running series of comedy crime still going. Simon Brett packed in Charles Paris ten years ago, Liz Evans only started 9 years ago. Peter Guttridge's last one came out four years ago, Jeremy Cameron last one came out in 2004 (and one straight-to-video film). Simon Shaw and Charles Spencer gave up after three books.
August must be an important time of year as Mills & Boon is to launch a crime and thriller series in its first venture beyond romance publishing since it was founded 100 years ago. Black Star Crime kicks off in August with five titles, and will initially publish five titles every two months. The heavily-­branded short novels will be priced at £3.99. Just to make it clear Black Star Crime is a completely separate brand to MIRA. Black Star Crime will include a range of genres, from cosy mysteries to hard-core thrillers, with authors to include new names as well as more established writers. M&B has liaised with Working Partners to generate some of the concepts, as well as acquiring titles itself, and is adamant the quality of the ­stories is paramount. Launch titles include Runaway Minister by Nick Curtis, Streetwise by Chris Freeman, A Narrow Escape by Faith Martin and Murder Plot by Lance Elliott. 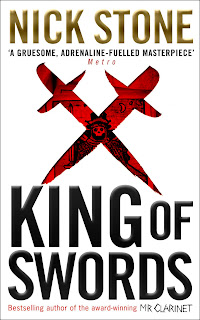 Nick Stone tells me that King of Swords has been optioned by Brilliant Films for Martin Campbell (Casino Royale, GoldenEye, Edge of Darkness) to direct. Nick would like to see Josh Brolin play the young Max Mingus and Idris Elba (Stringer Bell in The Wire) play Joe Liston.
And also that the August paperback edition to King of Swords had undergone several book designs and was happy that they settled on this one.

Well the parties continue and tomorrow night (18th March) is the launch for Tom Rob Smith and CHILD 44. No doubt Ali will blog long before I do but he's that kind of guy. I'll let you know any asides.
Posted by Mike Stotter at 14:35