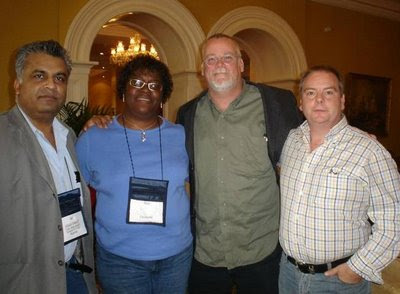 Mike Stotter and I would like to thank Ayo for her hard work blogging here, during Crimefest in Bristol.

I’m a tad busy catching up following Crimefest; but just had time to post this photo of Micheal Connelly, and the Shots Team, following our extensive interview over beer and sandwiches. We recommend his latest THE SCARECROW [Orion Publishing], and in case you are not aware additional audio-visual material is available from http://www.michaelconnelly.com/ –

So what’s THE SCARECROW all about?

Jack McEvoy is at the end of the line as a crime reporter. Forced to take a buy-out from the Los Angeles Times as the newspaper grapples with dwindling revenues, he's got only a few days left on the job. His last assignment? Training his replacement, a low-cost reporter just out of journalism school. But Jack has other plans for his exit. He is going to go out with a bang — a final story that will win the newspaper journalism's highest honor — a Pulitzer prize.
Jack focuses on Alonzo Winslow, a 16-year-old drug dealer from the projects who has confessed to police that he brutally raped and strangled one of his crack clients. Jack convinces Alonzo's mother to cooperate with his investigation into the possibility of her son's innocence. But she has fallen for the oldest reporter's trick in the book. Jack's real intention is to use his access to report and write a story that explains how societal dysfunction and neglect created a 16-year-old killer.
But as Jack delves into the story he soon realizes that Alonzo's so-called confession is bogus, and Jack is soon off and running on the biggest story he's had since
The Poet crossed his path years before. He reunites with FBI Agent Rachel Walling to go after a killer who has worked completely below police and FBI radar—and with perfect knowledge of any move against him.
What Jack doesn't know is that his investigation has inadvertently set off a digital tripwire. The killer knows Jack is coming—and he's ready. 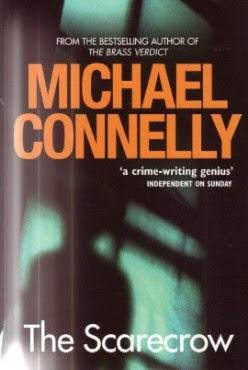 Shots would like Gaby Young of Orion Publishing for arranging time with Mike Connelly as we all had a great time [and laughed a great deal].

Incidentally Mike Connelly is a Guest of Honour at Bouchercon Indianapolis – so book now and see you in the bar.
Posted by Ali Karim at 12:25