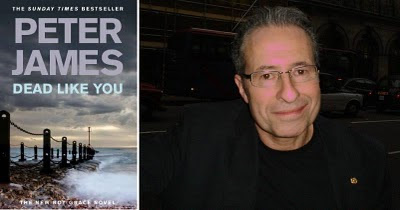 Congratulations to Peter James, the writer of the bestselling Roy Grace Detective series, set in Brighton by. James’ latest thriller DEAD LIKE YOU has hit the No 1 position with a double bullet according to The Bookseller –
Peter James has scored a UK first by being number one in both physical and iBook formats at the same time. This morning the crime author knocked Chris Evans' memoir It's Not What You Think (HarperCollins) off the top of the iBookstore charts, where it has been sitting since Apple launched the iPad on 28th May.
Although no figures have been released, James' Quick Read title The Perfect Murder (Pan Macmillan) has now reached Apple's digital summit. James is also currently number one in the Original Fiction charts with his new hardback release Dead Like You.
Geoff Duffield, group sales and marketing director for Pan Macmillan, said: "It’s absolutely fantastic to have the same author with different books at number one in the physical and digital worlds... What we are seeing there is recognition from readers that he is a brand that delivers."
Not read Peter James? Then this is a good place to start to catch up
Posted by Ali Karim at 11:43