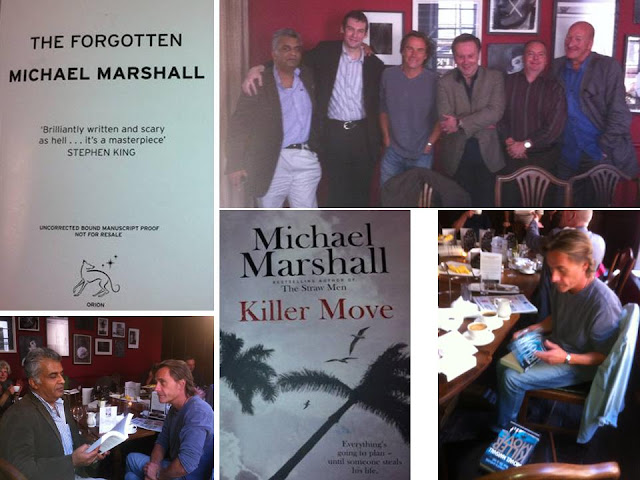 It’s been over a decade since Michael Marshall Smith, truncated his name and entered the world of crime / thriller fiction with the worldwide bestseller THE STRAW MEN. This novel of his The Straw Men established Michael Marshall as writer of crime thrillers that saw the world slightly off kilter, almost from a parallaxed view, unsettling, disturbing and most of all - different.

He followed up this startling novel with two further novels that explored this terrifying theme, THE LONELY DEAD, and BLOOD OF ANGELS. He wrote an essay for Shots on why he had made The Straw Men into a trilogy and what compelled him to write such disturbing work.

He followed up this trilogy with two equally unsettling thrillers, THE INTRUDERS and BAD THINGS. Since then we’ve had a gap in his novels as Michael has been occupied writing for the screen, and splitting his time between and . He recently joined the crime fiction cabal at Orion Publishing with his novel KILLER MOVE, which has just been released in Paperback in the UK and by William Morrow in the US, and again prepare to be unsettled –

Bill Moore already has a lot, but he wants more... much more.

He's got a lucrative job selling condos in the , a successful wife, a good marriage, a beautiful house. He also has a five-year plan for supersuccess, but that plan has begun to drag into its sixth year without reaping its intended rewards. So now Bill's starting to mix it up—just a little—to accelerate his way into the future that he knows he deserves.

Then one morning Bill arrives at work to find a card waiting for him, with no indication who it's from or why it was sent. Its message is just one word: modified.

From that moment on, Bill's life begins to change.

At first, nothing seems very different. But when things begin to unwind rapidly, and one after another, people around Bill start to die, it becomes increasingly clear that someone somewhere has a very different plan for Bill's future.

Confused and angry, Bill begins to fight against this unseen force until he comes to a terrifying, inescapable realization: Once modified, there's no going back.

Michael came to to launch the Paperback of Killer Move, with and Ali Karim from Shots invited to join some of the London Critics for lunch and drinks. As a long term reader of Michael’s work, I am excited to see that he has a new and highly anticipated novel due in March 2013 from Orion Publishing entitled THE FORGOTTEN.

Shots Ezine thanks Angela McMahon of Orion Publishing in having organized a special competition to celebrate the return of Michael Marshall in print with a prize of a signed paperback copy of KILLER MOVE.

Name the title of Michael Marshall Smith’s debut novel released in 1994.
Hint - it was the winner of the August Derleth Award [1995] and Philip K. Dick Award [2000]

Send your answer in an email to shotscomp@yahoo.co.uk marking the subject line “KILLER MOVE” and please include a postal address.

Good Luck, and if you've not read Michael Marshall or Michael Marshall Smith or even M.M. Smith - you have some wonderful books and short stories ahead of you Click this link to learn more >  http://www.michaelmarshallsmith.com

Terms and conditions for the Michael Marshall "Killer Move" Competition