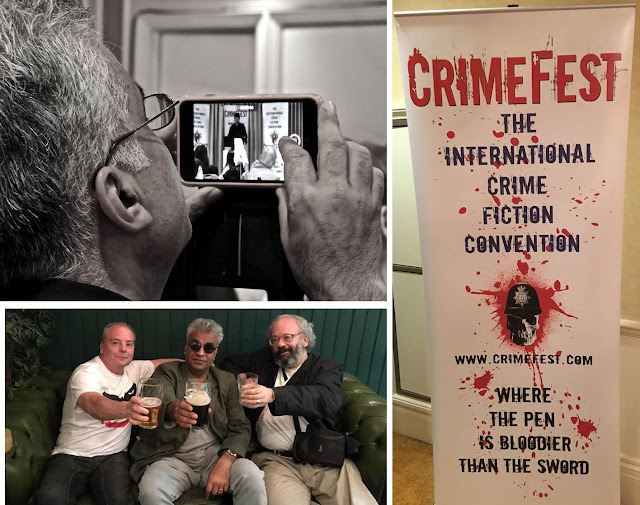 “A good writer possesses not only his own spirit, but also the spirit of his friends.”
― Friedrich Nietzsche

Prior to a full report of the Crimefest 2016 event, which will appear in due course at the CWA Member Publication Red Herrings Magazine, [as well as in Jeff Peirce’s The Rap Sheet]; I thought I’d share some of my observations of this wonderful weekend.

Jeff Peirce kindly posted an array of photos I took earlier here, as well as the results from the 2016 CWA Dagger Longlist Nominations here and the Crimefest Awards from the Gala Dinner here.

I have compiled these series of video observations [and a few photos] from the Crimefest weekend for our readers, and those unable to make the event, to get a flavour of what went on.

Like many of us in the world of Crime, Mystery and Thrillers, I just love reading the dark side of Literature and have many colleagues, and friends within publishing, writing, editing, promotion, reading and reviewing, many scattered around the world.

I find great enjoyment in discovering insightful and page-turning fiction, in a world that appears to get dumber by the day, it provides me insight and escape from our existence. I also find the atmosphere within the Crime, Mystery and Thriller community to be collegiate, hence my use of the Nietzsche quote [above], as we all support one another in a business that is getting tougher and tougher by the day, due the economy, technological change, our shortening attention spans, dwindling time, and the distractions that circle us like vultures in a Mike Stotter western.

These videos are captured using my Iphone as well as my trusty Canon Camera, and were not planned. They are short clips, filmed in gonzo style and purely for fun. Please bear in mind there was a great deal of good natured banter, socialising, laughter and drinking going on. 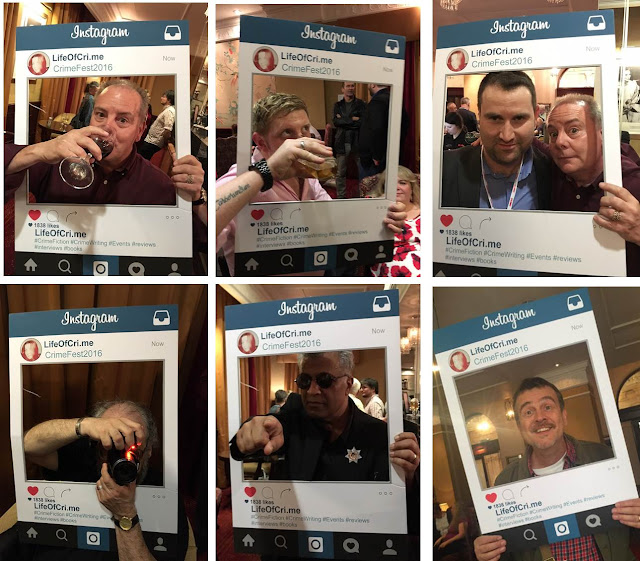 The Presentation of the 2016 CWA Dagger Longlists occurred on Friday Night, and managed by the Chair of the Crime Writers Association, Len L.C. Tyler, assisted by judging chairs / judges.

So after the Longlists were announced, there was a surprise for writer / critic & Crimefest’s official quiz-master Peter Guttridge who after presenting the John Creasy New Blood Dagger Longlist for best Debut, was caught by surprise by being presented with the CWA Margery Allingham Award from former Dr Who, Peter Davison [who also played Allingham’s Albert Campion on TV] for his short story Heart Shaped Box. The Judging panel described Guttridge’s story as -

“A clever and unusual story where Margery Allingham’s definition of a mystery – ‘box-shaped, at once a prison and a refuge’ – is explored by the narrator. It becomes rather more than the fascinating intellectual exercise the reader first takes it for, as a man aims to murder his wife and her lover in such an extraordinary way that his obvious motive won’t be enough to incriminate him.”

Another highlight was catching up with 2009 CWA Diamond Dagger awarded writer Andrew Taylor in conversation with the 2016 CWA Diamond Dagger awarded writer Peter James. The event understandably was standing room only as both Taylor and James are not only bestselling writers but have won numerous awards and accolades due to their narrative skill; with Peter James holding the current No 1 position in the UK hardcover charts with Love You Dead.

At the Gala Dinner on Saturday, Peter James was presented with his Diamond Dagger, and he gave a very amusing, though poignant speech which should give a boost to writers everywhere, who dream of a career as a novelist.

Earlier in the afternoon, Crimefest Special Guest, Ian Rankin was interviewed by The Telegraph’s Crime Fiction Critic Jake Kerridge. During their exchange Ian discussed the role of the author in trying to make sense of the reality that surrounds him/her and the reader - via the detective. Because when it comes to making sense of the reality we find ourselves in, we are the Detective, piecing together what is really going on, and perhaps why?

Ian also was asked by the audience about how he comes up with character names, including Malcolm Fox, John Rebus as well as the names from charity auctions.

And Ian Rankin also talked about the link between the reality and the fictional portrayal of the changing face of law enforcement in Scotland.

Later at the Gala Dinner, Ian Rankin gave a very interesting and amusing speech, balancing the reality of the judicial process against the fictional one, indicating the surreal nature of life. 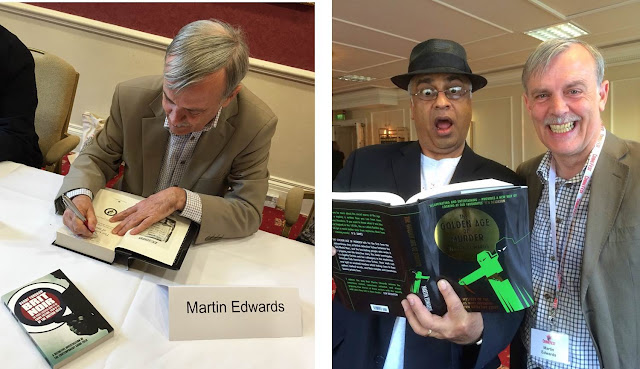 This is the first book about the Detection Club, the world’s most famous and most mysterious social network of crime writers. Drawing on years of in-depth research, it reveals the astonishing story of how members such as Agatha Christie and Dorothy L. Sayers reinvented detective fiction.

Other highlights included a rare appearance from writer / critic and Shots ‘Getting Away With Murder’ columnist The Talented Mr Mike Ripley to Bristol, where he participated in a panel discussion chaired by Journalist and Award-Winning Crime Writer Ruth Dudley Edwards on the Comic Crime Novel, with James Runcie, Nev Fountain and Douglas Lindsay.

We present some short amusing clips from that panel -

It was apt that Adrian Muller and Myles Allfrey closed Crimefest 2016, with Mike Ripley’s “Sorry I haven’t a Cluedo” aided by Peter Guttridge, where two teams battled in an amusing quiz related to Crime Fiction. Laura Wilson captained the Female Crime-Writers with her colleagues Susan Moody and Alison Bruce, while Ian Rankin captained the Male Crime-Writers Andrew Taylor and Thomas Mogford

Shots Blog will feature the full video of Mike Ripley’s “Sorry I haven’t a Cluedo” as well as an edited video of Ian Rankin in conversation with Jake, with The Rap Sheet Report to follow in due course.

The Shots Team hope to see you at 2017’s Crimefest, with full details available from www.crimefest.com 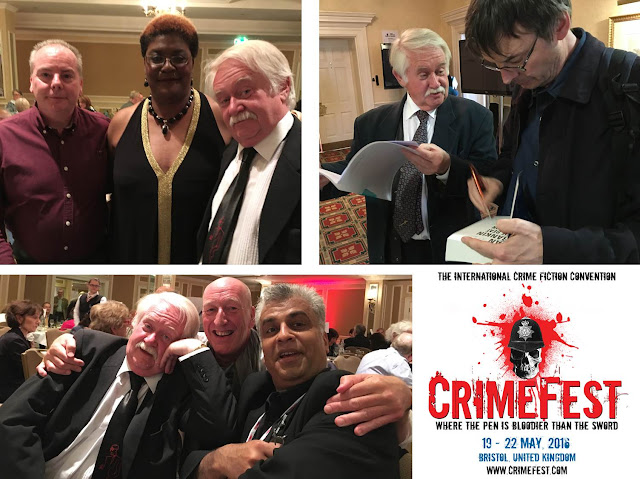 I look less like Jesus than I do like a distinguished 19th-century American writer or politician. But don't worry. Next Crimefest I'll get a competent haircut.