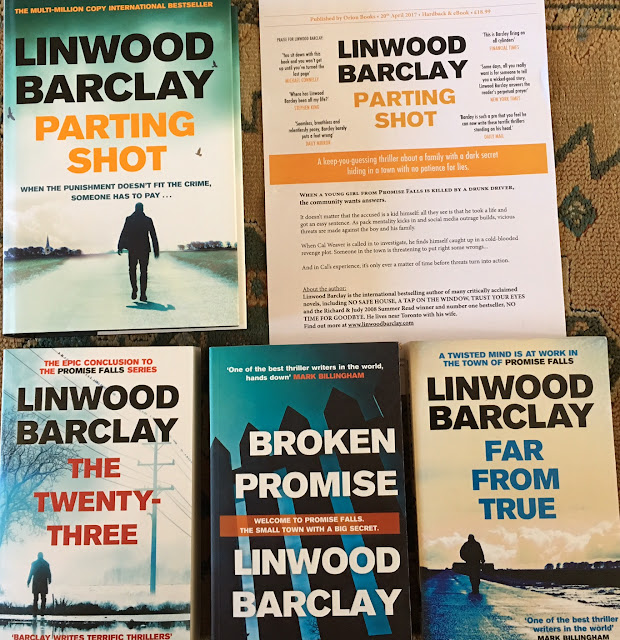 When Linwood Barclay closed his remarkable Promise Falls Trilogy with The Twenty Three, there were a few questions that some readers ponded upon; like life itself we draw our own conclusions from what reality presents us. So like when his Award-winning No Time For Goodbye closed, Linwood went back with a coda of sorts, releasing Never Saw It Coming; which incidentally is currently being filmed.

The release of a Linwood Barclay novel is an event, of which his Promise Falls trilogy is a cube function, in terms of excitement, which even Stephen King commented upon.

Linwood Barclay kindly agreed to an interview as we had a few questions about his Promise Falls trilogy, as well what’s in store with his Parting Shot, the Coda to this dark trilogy, released in the UK / Ireland next week and in November in the US / Canada.

Ali       First question first. When you started the thinking process prior to penning Broken Promise, did you consider that it would become bigger than a single novel; a dark saga?

Linwood   I had set out from the very beginning to make this a three-novel project.

AK       And how were your Agent Helen Heller, your publishers Orion in the UK as well as your US / Canadian publishers about you embarking upon a saga, with their commercial considerations?

LB    They were excited, but the project did involve some marketing challenges. Do you tell everyone with book one that it’s a trilogy, and run the risk that they won’t buy it until book three is out? And if that’s the strategy, will some readers be annoyed when they get to the end and realize the story continues?

AK       So tell us a little about the writing process. How detailed was your plotting notes, and how high was the ‘tightrope’ in this high-wire act?

LB     Books one and two (Broken Promise and Far From True) are largely standalones, with another story running in the background that explodes in book three. So in many ways, the first two were not too unlike writing one of my regular thrillers. But I had to have the backstory all figured before I even started Broken Promise. 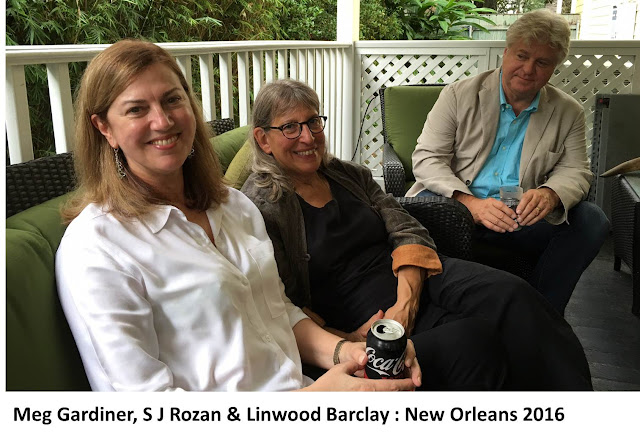 AK       With Far From True, did you know where it would lead to in The Twenty Three?

LB   Pretty much. I couldn’t wait to get to The Twenty-Three because I knew that what was going to happen was going to be huge, bigger than anything I’d written before.

AK       When it comes to ‘plotting’ writers have differing methods in terms of the level of detail in the treatment; though serendipity and the thinking process does produce unplanned surprises, so tell us about the contrasts between ‘plotting’ and ‘writing’ during the trilogy.

LB     I can only plot so much ahead of time. I can map out the big picture, and I know where I am headed, but I don’t see the opportunities that exist in the novel until I am in it.

AK       The Promise Falls books interlock with an intriguing array of characters as well as a complex narrative, which must have been difficult to keep in your head. So what were you like as a person, while working on these books? And did you need to take Advil or anything stronger?

LB      Every day, around three, my wife calls up from downstairs. “It’s vodka o’clock.” That’s like the whistle blowing at the end of the shift. If I have 2,000 or more words done, I stop and heed the call.

AK       With the last part of the Trilogy [The Twenty Three] just out in paperback in the UK and US, did you consider the issue of the dénouement, as many readers like the close of a novel [or series] to be neatly wrapped up with ribbons and bows; others however prefer to have some loose ends for the reader to contemplate; like life?

LB       I felt the trilogy was really wrapped up, although some readers felt differently. What about Duckworth, they asked. Is he dead. No, he’s fine. And what about David Harwood’s situation? Well, I thought it was resolved, too, but maybe not to everyone’s satisfaction. Not everyone gets a happy ending in my novels. Some of these strands will be addressed in Parting Shot.

AK       How did you keep track of the characters, while writing and how did you ensure you kept them unique like Detective Duckworth and Private Investigator Weaver, as well as the many others that pepper the Trilogy.

LB      God, I don’t know. I always say, keeping track of 10 or 20 characters is nothing compared to what my wife Neetha had to do as a teacher, with 30 or more new kids every year. And she learned all their names in no time.

AK       Did you worry about the gaps between the releases of each book in the trilogy in terms of feeding enough backstory to prevent disorientation of the reader? As well as making them accessible as ‘standalones’? 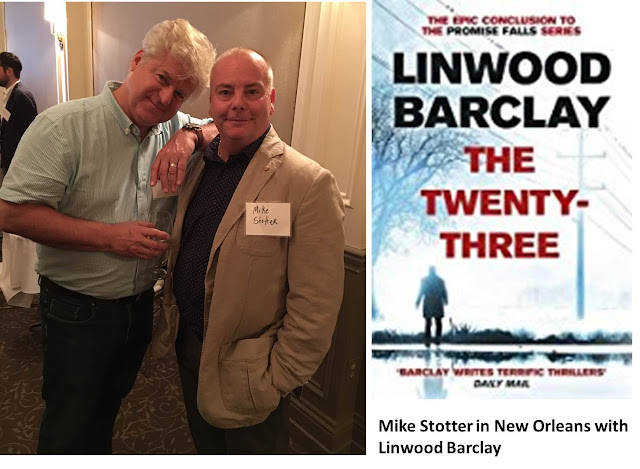 AK       Of all three books in the Promise Falls Trilogy, which of the three gave you most enjoyment in the writing process?

LB       By far, book three. The Twenty-Three was in my head from the first page of Broken Promise. I couldn’t wait to get to it and create all that mayhem.

AK       I’ve been impressed by the professionalism of your book trailers, so who are Loading Doc Productions?

LB      That’s our son, Spencer. He’s a very good filmmaker. We have not done trailers for the last two or three books, as we’ve not been sure they work as a promotional tool. And Spencer is now consumed with working on a museum-like project depicting much of Canada in miniature.

AK       So tell us a little about the coda to the trilogy, ‘Parting Shot’ as well as when publication in US / Canada and the UK / Ireland is planned

LB   By the time anyone reads this, Parting Shot should be out in the UK and Ireland. The book has a November release in Canada and the US.

AK       Did it concern you that The Twenty Three might be confused with the 2007 Joel Schumacher film The Number 23, with Jim Carrey or with Ace Ventura, Pet Detective……laughing…….?

LB    Not in the slightest……..laughing

AK       These three novels edge toward the horror side of the Crime-Mystery genre, though you avoid reaching for supernatural; so do you enjoy Horror Fiction? And what are the darkest books you have enjoyed?

LB  I like some horror fiction. I think it depends on the writer. As you know, I’m a big fan of Stephen King’s work, and some of his horror novels are among my favourite books. Pet Sematary, for example. But I don’t read widely in that genre.

AK       I was not surprised that Stephen King finds merit in your work, recalling him name checking your work in his own writing; so tell me which of King’s work are your favourites, and why?

LB      I just mentioned Pet Sematary, but 11/22/63, about the guy going back in time to try to stop the Kennedy assassination, is certainly my favourite of his in the last ten years or so. But I also love It, Misery, the stories in Four Past Midnight, Christine. How much time do you have? 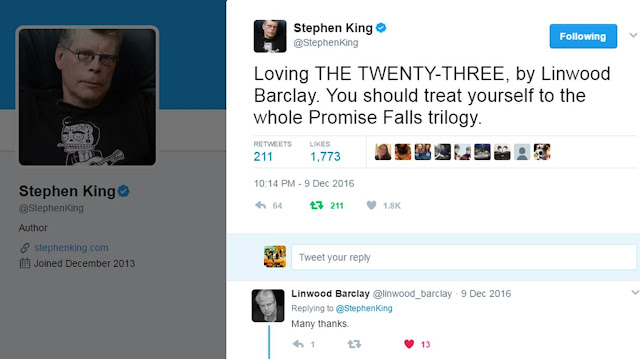 AK       Like in many of Stephen King’s work, the protagonists in your novels are often ordinary people trapped in the grip of extraordinary events; so what is it about contemporary life that appeals to you in story-telling?

AK       I know many of your novels have been optioned for Film / TV so any news on green lights as yet?

LB      The Accident has been made into a six-part TV series in France. It’s all done but has yet to air. I’ve seen the first two subtitled episodes, and I’m very pleased. And Canadian director Gail Harvey has just finished shooting Never Saw it Coming, up in Sudbury, Ontario. I wrote the screenplay for that one. We hope to have it ready for a fall release. And something else is cooking, which I hope I’ll be able to talk about soon.

AK       And tell us a little about what books you have recently enjoyed as well as TV / Film?

LB       Happy Valley is one of the best cop shows ever made. Other recent series we have loved include Westworld, The Americans, Better Call Saul, Last Tango in Halifax, The Missing, The Night Manager and The Night Of. And I can’t wait for the return of The Leftovers (not a cooking show).

AK       I understand your hobby of building large and detailed model railways and landscapes borders on a professional interest, so would care to tell us where this fascination came from and a little about this interesting hobby of yours?

LB      My dad made my a very simple train layout when I was around four or five years old. I love miniatures. When I became an adult, with a house and a basement, I returned to the hobby big-time. The layout I’m currently working on is, I think, my seventh or eighth. We’ve moved a few times so I have to tear it all down and start again. I think, when you spend your days thinking up an entire world in your hand, it’s fun to work on one with your hands. It’s very Zen-like for me to stand in a room with several trains circling around me.

AK       I know from many of our writing / publishing colleagues how hard it is to work when in the background we have this wave of so-called ‘populism’; with regime change in the US under Trump / Bannon; while in Europe we have Brexit in the UK and the growing lurch to the Right-Wing on the mainland – so have you any thoughts on how to cope and work with all this pervading the background of our reality?

LB      I’m appalled by much of what is happening in the world, but it doesn’t stop me from writing. In fact, some of that rage and anxiety probably works its way into the stories in some way, and makes it better. 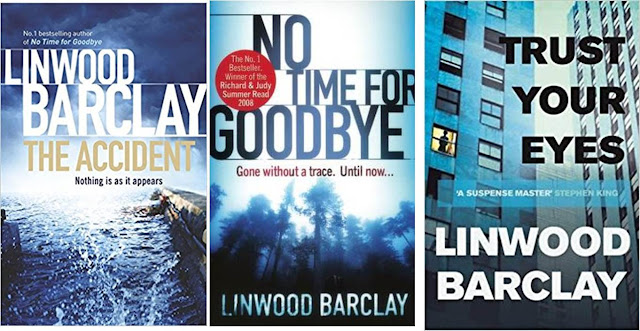 AK       Though one positive is the need for professional Journalism, a career that got you writing, so are you doing any Journalism currently?

LB      I worked in newspapers for 30 years, nearly 15 of them as a columnist. It was a great experience, but I pretty much left that behind when I turned to writing novels full time about ten years ago. I write the occasional piece when asked.

LB       My first novel for young readers, Chase, comes out in July, and the final book set in Promise Falls, Parting Shot, comes out this month in the UK and Ireland. It won’t be out until the fall in North America. Also, my four novels about Zack Walker, previously only released in English in Canada and the US, will all be released by my UK publisher, Orion, between August and November. Next year’s novel, which will be a bit different, is finished (well, there’s more editing to do).

AK       Thank you for your time and insight

Shots have copies of Parting Shot available for pre-order from our bookstore Here, as it is released on April 20th, and read the Shots Review of The Twenty Three as well as a primer about the preceding two works that form this elegant, but dark trilogy.

More information about the work of Linwood Barclay is available here