Tell me a secret. Write it on a piece of paper.

I’m sure there’s something about yourself – something that happened, something you did – that you’ve never told anyone. It’s probably a small thing, you can live with it.


But what if that secret was a terrible, dangerous thing, and it came back to haunt you? Just what would you do to make it go away? Secrets drive you to desperation. Before you know it, you’re crossing a line – doing things you never imagined you were capable of.


Just how far would you go?


Secrets – of the deadly variety - are catnip for crime writers.


When I began to write about DI Ray Drake and DS Flick Crowley and the other characters in my crime thriller The Two O’Clock Boy, I wanted to discover how the sins of the past can crash catastrophically into the present. I wanted a terrible secret to emerge which would pitch my characters into the molten heat of an emotional firestorm. I wanted to body slam them with those big, nasty emotions: guilt and rage and terror. I wanted to make bad things happen - very bad things – and watch them fall apart.


At the eye of this terrible conspiracy, trying to make sense of it, are my coppers – Drake and Crowley. They’re the ones who have to get to the truth of a series of murders, to bring to an end a deadly slaughter. And Ray Drake knows better than most about secrets, and about guilt and rage and terror…


Because Ray’s got a secret. And if anyone found it what it was… well, it doesn’t bear thinking about.


I liked Ray Drake when I started to get to know him, he flew off the page. I discovered Ray’s a family man. He’s a bit tense, perhaps – troubled -  but a good copper, a great copper. He’s the kind of guy you’d want in your corner.


But now, knowing what I know about Ray, do I understand him?


You see, Ray’s a lot like his city. You think you know him, but you don’t, not really. London is 2,000 years old. Secrets multiply within its boundaries like germs in a petri dish. Some of them are frankly macabre, unsettling. Bolt as much glass and steel to the city as you like, build it ever higher or wider, but its streets will always pulse with dangerous mysteries – and it absolutely will not give them up without a fight.


But sometimes secrets do emerge from its tangled, teeming streets. And one of them its on his way to give Drake and Crowley the fight of their lives.


You see, after several decades, The Two O’Clock Boy is back.


So, that secret I asked you to write down. Burn it, shred it, get rid of it how you see fit. But don’t ever kid yourself that you'll ever be free of it. 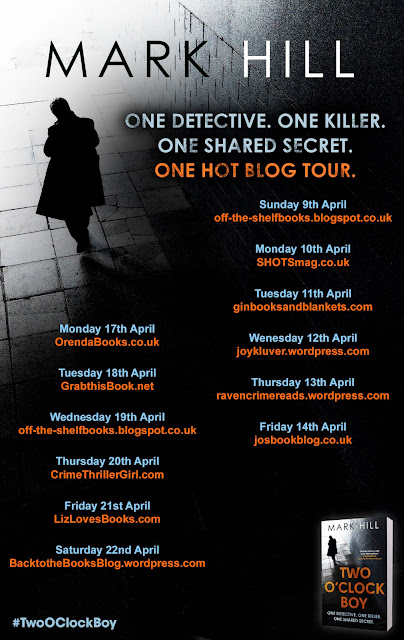 Thirty years ago, the Longacre Children's Home stood on a London street where once-grand Victorian homes lay derelict. There its children lived in terror of Gordon Tallis, the home's manager.
Then Connor Laird arrived: a frighteningly intense boy who quickly became Tallis' favourite criminal helper. Soon after, destruction befell the Longacre, and the facts of that night have lain buried . . . until today.


Now, a mysterious figure, the Two O'Clock Boy, is killing all who grew up there, one by one. DI Ray Drake will do whatever it take to stop the murders - but he will go even further to cover up the truth.