From London to San Francisco 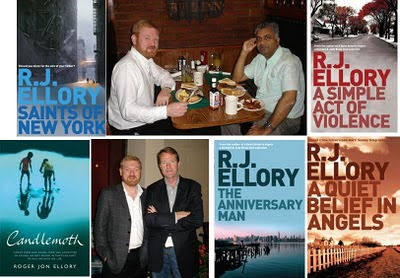 It’s a busy time with Mike Stotter, Ayo Onatade and I. We’re in London to celebrate the best of the best in the crime fiction genre this Friday at The Specsavers CWA Dagger Awards. This year we have both Literary as well as Cinematic work under the judge’s microscope.

Then next week, Roger Ellory and I make the long journey to San Francisco for this year’s biggest event in the Crime and Fiction Diary – Bouchercon, the world crime and mystery convention. It’s going to a very large event. Shots gives a huge round of applause to Chair Rae Helmsworth and her dedicated team of organizers. It really is a mammoth task managing one the biggest Bouchercon events ever - looking at the attendance register it seems everyone is coming!

Roger and I have a very busy time planned in the US for Bouchercon, following which Roger travels to Canada for the International Festival of Authors. Roger since his debut novel ‘Candlemoth’ has been globe-trotting, racking up international recognition for his fiction, including this summer, one from Britain & gaining readers including from business. I always enjoy traveling with Roger, as we always have a lot of fun and amusing misadventures. I have known Roger for many years, and I am amazed at how hard he works and actually finds time to write his internationally recognized fiction, including his latest ‘Saints of New York’. I was delighted to view this disturbing book video which shows you just how dark Ellory’s imagination is -

If you find yourself around San Francisco next week, why not meet Roger Ellory at Bouchercon where he’s featured on an interesting panel moderated by Jen Forbus entitled ‘Dead or Alive : Making Crime Fiction Come Alive’ on Thursday October 14th at 1130 hrs in Bayview B. Joining Roger and Jen are Brad Parks, Hilary Davidson and Douglas Corleone.

Incidentally I am moderating a couple of interesting panels myself –

MOST LIKELY TO SUCCEED - our favorite books

I am as ever flattered to be moderating the book reviewing panel where we will discuss our favourite books, past present and future with key critics of the genre. Remember it was at Bouchercon that word about Stieg Larsson travelled from Europe to America, so you may well discover what the critics reckon will become the big books of 2010.

Joining me are the following key reviewers -

Janet Rudolph is the editor of the Mystery Readers Journal, and creative director/writer at Murder on the Menu and TeamBuilding Unlimited. She blogs daily at Mystery Fanfare and DyingforChocolate.com, facilitates a weekly mystery bookgroup, hosts literary salons with crime writers, and has been a committee member on numerous mystery conventions. She has won the Anthony Award for Special Service to the Field and the Don Sandstrom Memorial Award for Lifetime Achievement in Mystery Fandom. A long time contributor to the mystery genre, she received her Ph.D. in religious mystery fiction. She lives in the Berkeley (CA) hills with her husband, a golden retriever, and two cats. Her websites are: www.mysteryreaders.org, www.murderonthemenu.com, www.teambuilding-unlimited.com and Blogs: Mystery Fanfare (mysteryreadersinc.blogspot.com) and DyingforChocolate www.dyingforchocolate.com.

Chris Aldrich - For 12 years, Chris Aldrich was the co-publisher, with Lynn Kaczmarek, of Mystery News, the Anthony Award winning interview and review publication. Chris loves introducing readers to new and wonderful crime fiction authors. She has written essays for other publications, including They Died in Vain, the 2006 MWA Annual and the Bouchercon 2003 program book. In real life, Chris is a global product Manager for a software company that specializes in international compliance and logistics but she secretly yearns to be a PI. She lives in the New York suburbs and is an avid soccer aunt.

Seattle-based Andi Shechter chaired Left Coast Crime in 1997 and 2007. A long-time reviewer and blogger, Andi lives in the SF and mystery communities and spends little time in the real world, except when the library and coffee shops are open. She was Fan Guest of Honor at LCC in Anchorage in 2001. Andi can frequently be found watching figure skating, reading cookbooks and hanging out with a fabulous collection of toy gorillas and monkeys. Andi lives with the amazing Stu Shiffman. OR she's a blond, coke-addicted runway model with an attitude from New York. Go ahead, ask her.

Sarah Byrne is a lawyer from Canberra Australia, who you'd think would get enough of this sort of thing at the office. She also sings jazz, and any time left over is given to reading crime fiction, writing about crime fiction, or talking about crime fiction at such events as Bouchercon, Left Coast Crime, the Melbourne Crime & Justice Festival and the Canberra Writer's Festival. She's also twice been a Ned Kelly judge. This is her 7th Bouchercon and she's thrilled to be part of it.

And the following day, I am very excited about this last minute addition; a panel that I am sure will be very well attended due to the truly international nature of the crime fiction genre. It includes a very rare appearance from two of the most viscerally interesting writers of crime thrillers since Stieg Larsson; the Swedish writing duo Roslund & Hellström.

Zoë Ferraris moved to Jeddah, Saudi Arabia in the aftermath of the first Gulf War to live with her then-husband and his family, a group of Saudi-Palestinian Bedouins. Her first novel, FINDING NOUF, [aka Night of the Mi’raj] won the LA TIMES book award for Best First Novel. Her debut was also shortlisted by The CWA [in Britain] for the 2008 John Creasey (New Blood) Dagger, with the judges describing it as “A young woman from a wealthy Saudi family is found murdered in the desert. Her death is investigated by Nayir the Bedouin. He is a sympathetic hero with a genuine sense of modesty. The novel is tense and well paced.” A follow-up novel, CITY OF VEILS, has just been published by Little, Brown. She lives in San Francisco.

Anders Roslund & Börge Hellström are awarding winning Swedish crime writers who collaborate on very dark, fast moving and socially aware crime thrillers such as The Beast, Box 21 [aka The Vault] and the upcoming 3 Seconds, with two earlier novels currently in translation into English.

Anders Roslund Born 1961. Founder and former head of Kulturnyheterna (Culture News) on Swedish Television. For many years he worked as a news reporter – specializing in criminal and social issues – and as an Editor-in-chief at Rapport and Aktuellt, the two major News programmes on Swedish Television. He has worked in a canning factory in Israel, as a kiwi farmer in New Zealand, and as a waiter in Colorado.

Börge Hellström Born 1957. One of the founders of the crime prevention organization KRIS (Criminals Return Into Society). He has worked with rehabilitation of young offenders and drug addicts. He has been a singer and guitar player in different bands, and made a living as a travelling troubadour.

Joshua Sobol is a playwright, director and author. He wrote sixty two plays, two novels and short stories. His play "GHETTO" has been produced by leading theatres worldwide and won the Evening Standard award and London Critics award for Best Play 1989 and was nominated for the Laurence Olivier award. His play "A Palestinian Girl" won the Issam Sirtawi award. Sobol developed and explored together with director Paulus Manker new forms of drama and wrote the Polydrama "ALMA". Joshua Sobol is committed to the struggle for a peaceful solution for the Israeli-Palestinian conflict. Sobol’s latest American publication is the novel "Cut Throat Dog" by Melville House Publishers.

Yrsa Sigurðardóttir is an Icelandic writer, of both crime-novels and children's fiction. She has been writing since 1998. Her crime novels feature lawyer Thora Gudmundsdottir and include Last Rituals, My Soul to Take and Ashes to Dust. Iceland's only female crime novelist she told the Scotsman newspaper earlier this year “The problem with being a crime writer in Iceland, is that there's not that much crime there to write about. Icelandic murders, as well as being rare, tend to have a depressing stupidity about them.” She also has a career as a civil engineer and lives in the Reykjavík suburb of Seltjarnarnes. She is married with two children

This week at The Rap Sheet, we’re featuring a pre-Bouchercon special feature length 2-part interview with Roslund & Hellström to coincide with their rare visit to the US, which will include a look at their disturbing debut novel The Beast [2005], Box 21 aka The Vault [2007] and just released, the prison psycho-drama that is 3 Seconds. A warning, their work is not for those of a sensitive nature, but if you like challenge in your crime thrillers…….check out The Rap Sheet this week and come to San Francisco next week to attend the biggest event in the International crime-fiction genre - Bouchercon.

We hope to see you in the US West Coast next week!
Photos (c) Ali Karim, with Roger Ellory and Lee Child
Covers (c) Orion Publishing
Posted by Ali Karim at 13:09

Yes! Yes! Yes! Come to DEAD OR ALIVE. I told Roger that I'm making it my mission to spread his name in the U.S.

I'm late to the party on discovering his work but it is AMAZING, FABULOUS, SPECTACULAR. I can't say enough great about it. Really and truly, my greatest reading discovery this year. I'm so excited to have him on my panel.