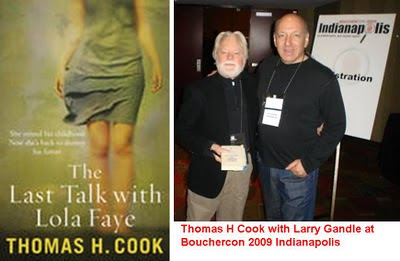 The release of a novel by Thomas H. Cook is always a major event for me. It means I clear a gap at the very top of my reviewing pile for his work, and this month, crime / thriller readers have a treat in-store as Cook releases his latest, and possibly his most disturbing, ‘The Last Talk with Lola Faye’ from Quercus Publishing. This melancholic work hits the bookstores in the UK this week. My copy is packed for my upcoming trip to Bouchercon 2010 San Francisco, to help me cope with the long journey to the US West Coast.

Cook’s latest mines the darkest edges of human experience, looking at the sharp bends that pepper his protagonist’s lives -

Thomas H. Cook returns to his home territory in this Southern Gothic mystery set in Alabama. Luke Paige, historian and writer, is signing his latest work in a bookstore when in the queue he spots a woman he hoped never to see again. Lola Faye was once his father's secret lover, the destroyer of his childhood. For her husband shot Luke's father dead, and his mother died soon after. Lola Faye wants to talk - and talk - over a drink, that becomes dinner, and then another drink. Slowly, painfully, Luke and Lola revisit the terrible events that have shaped their lives. The story they reveal is one of the timeless struggle between fathers and sons; of longed-for passion; of hopes and dreams thwarted by fate and circumstances. This is Southern Gothic at its most compelling.

I have been fortunate to have bumped into Tom Cook several times following his UK trips to the Harrogate Crime Writing Festival, as well as in the US at Bouchercon 2009 in Indianapolis. I am always perplexed that despite being highly rated by the leading critics, and literary judges internationally, he remains a cult writer. I would have thought Cook and his work would have broken through into the international bestseller lists a long time ago. That was the theme when I interviewed Cook for January Magazine –
And you’ve become quite prolific since. So why -- despite your having received awards and critical acclaim -- do you remain a secret to many readers?
I truly don’t know the answer to that question, but the experience can be very disheartening, let me tell you. I think many readers just want a fast read. Which is fine. They have that right. But I don’t write fast reads. I think mystery readers in particular are quite demarcated in their reading habits. People who read puzzle mysteries don’t read thrillers, and people who read thrillers don’t read puzzle novels, and so on down thorough several subgenres. I write a combination mystery-mainstream novel, and that is a big problem, I think, in that mainstream readers very often never give mysteries a chance. I fall through a lot of cracks, and so far, despite wonderful reviews over a period of 20 years, I am still one of the best-known unknown writers out there.
Oddly enough, I have absolutely broken through in France and Japan, and seem close to doing it in England. The U.S., however, has not yet fallen under my spell. But I’m still working on it.
Read the full feature here

So if you’ve not experienced Cook’s work, ‘The Last Talk With Lola Faye’ looks like a good place to start; but I must warn you that when you crack the spine of a Thomas H. Cook novel, you’ll find reality crumble as you become lost in the lives of his characters who have to tackle the darker side of the human condition.