Books to look forward to from Little, Brown 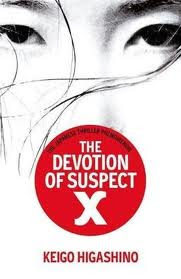 Yasuko lives a quiet life working in a Tokyo bento shop looking after her only child. When her ex-husband turns up without warning her world is turned upside down. Detective Kusanagi of the Tokyo police tries to put together the events that happened that day but finds himself confronted by the most puzzling and mysterious circumstances that he has ever had to investigate. Nothing makes sense and it will take a genius to understand the mastermind behind this particular crime. The Devotion of Suspect X is by Keigo Higashino and has already been made into a cult film. The Devotion of Suspect X is due to be published in July 2011.

When Hostage Police officer Helen Weeks walks into her local newsagent's on her way to work little does she know that this simple daily ritual will change her life forever. It's the last place she expects to be met with violence, but as she waits innocently at the till, she comes face to face with a gunman. The Demand - the crazed hostage-taker is desperate to know what really happened to his beloved son, who died a year before in youth custody. By holding a police officer at gunpoint, he will force the one man who knows more about the case than any other to re-investigate his son's death. That man is DI Tom Thorne. DI Tom Thorne teams up with Helen Weeks from In The Dark in Good as Dead. Good as Dead is due out in August 2011and is the forthcoming book from Mark Billingham.

The People Next Door is the debut novel by Christopher Ransom. In a quiet American suburb, the Nash family lead unremarkable lives until the new neighbours arrive. The Renders are beautiful, confident and charming and all this seduces the Nash’s. However the Renders are hiding a terrifying secret. They are not as perfect as they seem to be and in fact they are not even human. When Mike Nash learns what they are he finds himself in a heart stopping fight to save his family. The People Next Door is due to be published in July 2011.

Cage of Bones is the third book by Tania Carver. Workers demolishing a building in Colchester make a horrifying discovery in the basement: a cage made of human bones… with a feral child inside. As Detective Phil Brennan and Psychologist Marina Esposito investigate, they expose the trail of a serial killer who has been operating undetected for thirty years – a killer with a disturbing connection to Brennan’s father. Cage of Bones is due to be published in September 2011.

On board a Washington State ferry Tyler Locke is informed by an anonymous caller that a bomb is set to detonate in ten minutes. On deck he finds classics professor Stacey Benedict has received the same information and they must work together to decipher a puzzle in ancient Greek. However, this is just a test created by a terrorist cell that is intent on using them to undertake an incredible mission to uncover the legendary riches of King Midas. The Midas Code is by Boyd Morrison and is due to be published in August 2011.


A mysterious plane crash in the American West. A murder at a UK university. An ominous threat from a band of Israeli assassins. As a hard-bitten British cop and a youthful FBI agent investigate, they expose a link to the Dead Sea Scrolls – and a sinister band of ‘fallen angels’ who claim to be descended from Judas. The Dead Sea Deception is by Adam Blake and is due to be published in August 2011.

Broken Home is by Roberta Kray and is due to be published in September 2011. When a stranger brings news of a half-sister Hope never knew she had her world changes. Connie’s in deep trouble and the mysterious Flint needs Hope’s help to find her. To find her sister Hope must enter the dark underworld of the East End. If Connie’s going to be saved, Hope may have to get close to the enemy.

Never Knowing is by Chevy Stevens and is due to be published in December 2011. What if murder was in your blood? Sara Gallagher is finally happy. However, there is one big question that still haunts her – who are her real parents? Sara is ready to find out but after her birth mother rejects her again she discovers her biological father is an infamous killer. Sara soon realises the only thing worse than finding out your father is a killer is him finding out about you…

Dublin Dead is the second novel by Gerard O’Donovan and is due to be published in December 2011. Journalist Siobhan Fallon enlists the help of DI Mike Mulcahy for a story she’s covering about the disappearance of a young woman from Cork. The duo find themselves dragged into the ruthless world of international drug smuggling and murder.

e sees the return of Maggie O’Dell. On a crisp autumn evening in Nebraska Maggie O’Dell is trying to make sense of the deaths of several teenagers. Sifting through what is real and what is hallucination Maggie realises that the surviving teens are being systematically eliminated. Meanwhile on the East Coast, army colonel Benjamin Platt is desperate to identify the pathogen that has infected children at a Virginia elementary school. Despite the miles that separate them, the two cases collide. Hotwire is by Alex Kava and is due to be published in July 2011.

Panic is by Jeff Abbott and is due to be published in July 2011. Evan Casher had a perfect life: great parents, his first girlfriend and a huge online following for his films. But when he comes home from school to find his father missing and his mother dead. Evan is going to learn the hard way that the people he trusted the most were the people he knew least and that a sixteen-year old boy might be the only one who can be a murderer to justice.

When a storm strikes in the Scottish Highlands, Martin and Sue find themselves stranded in a simple hut miles from anywhere and completely isolated. But Sue starts to sense that they are not truly alone. With no way to escape, Sue and Martin must try to hold on to their sanity, as the shelter quickly becomes a prison – and their thoughts begin to turn murderous. The Haunted is by Niki Valentine and is due to be published in October 2011.

Mystery in the Minster is the seventeenth novel in the Matthew Bartholomew series by Susanna Gregory. It’s 1358 and the near destitute college of Michaelhouse in Cambridge is promised a welcome source of income – a legacy from the Archbishop of York of a parish close to that city. But there has been another claim to its ownership and it seems the only way to settle the dispute is for a deputation from Michaelhouse to travel north. However, once they arrive in the bustling city, Matthew Bartholomew and his colleagues learn that the Archbishop’s executors have died in unexplained circumstances and the codicil naming Michaelhouse as a beneficiary cannot be found. Mystery in the Minster is due to be published in August 2011.

Snakepit by Nick Brownlee sees the return of Detective Inspector Daniel Jouma and ex-policeman Jake Moore in the fourth book in the series. It has been a crazy year and what should have been a relaxing fishing trip together finds Jouma and Moore in trouble. They are kidnapped at see by a gang of murderous Somali’s and held hostage upon a ship skippered by the notorious pirate Omar Abdulle. To stay alive they must pool all their experience together to not only catch a killer but to also survive on the run in Somalia as well. Snakepit is due to be published in July 2011.

And for fans of Val McDermid the yet untitled new Carol Jordan and Tony Hill novel is due out in September 2011.