Latest Crime News Round Up

Book Right News With the London Book Fair over for another year lots of book deals appear to have been done. According to the Bookseller, publishers Harvill Secker have acquired a dystopian crime novel by Finnish writer Antti Tuomainen, set in a futuristic Helsinki. Harvill and Secker will publish the book entitled the healer in 2013. The Healer won the Finnish Academy of Crime Writers' Award 2010 for Best Crime Novel of the Year from the London Book Fair!

Publishing director Wayne Brookes at Pan Macmillan has acquired world rights in two books by F R Tallis from Clare Alexander at Aitken Alexander. The first, Strix, a 19th-century Gothic horror novel which is due to be published in the late Spring 2012.

Suzie Dooré, Hodder fiction editorial director has bought an as-yet-untitled novel about a freed slave who becomes a spy during the American Civil War. It will be published in February 2012. She has also bought the rights to a standalone horror novel by Icelandic author Yrsa Sigurdardottir. The novel is called Blessed are the Children and tells the tale of three friends who are terrorised by the ghost of a drowned child while they renovate a derelict house.

Becky Hardie at Chatto & Windus has acquired The Tale of the Raw Head and Bloody Bones, the debut novel by Jack Wolf about a genius but psychotic 18th century surgeon. Publication date is yet to be confirmed. Chris Smith, editorial director at HarperCollins has acquired the rights to Jack Higgins novel A Devil is Waiting.

Arcadia have bought for their Eurocrime series the rights to two books. The first Cold Hearts is by Gunnar Staalesen and is a thriller about a series of murders in the Norwegian city of Bergen. It will be published in autumn 2012. The other crime book is The Iron Chamber by Matti Joensuu, The Iron Chamber is about a series of mysterious set of murders in Finland and it will be published in autumn 2012.

Sookie Stackhouse author Charlaine Harris has signed a deal with Quercus for a new three-part graphic novel series. The series entitled Cemetery Girl will be co-written by Christopher Golden.
Bloomsbury has acquired world rights in a series of six crime novels by Bath Literature Festival director James Runcie. The first novel in the series is entitled Grantchester Murders, and features character Sidney Chambers, honorary canon of Ely Cathedral, as he works with friend Inspector Horatio Keating to unravel case after case. Granchester Murders will be published in May 2012.

Ebury have acquired a two-book deal from Lisa Scottoline. The first, novel in the two- book deal Save Me, will be published in March 2012.

Faber have acquired Chris Pavone's début thriller The Expats for a high five-figure sum. The novel follows Kate and her husband as they relocate to Luxembourg and she thinks she is leaving her secret life in the CIA behind. Faber plans to publish in summer 2012.

Nomination news!
The Crime Writers Association has announced the Dagger in the Library 2011 long-list. Sponsored by Random House Group, the Dagger is awarded to an author for a body of work, with writers nominated by UK libraries and readers' groups and judged by a panel of librarians. The shortlist will be announced at the CWA reception at CrimeFest on 20th May, with the winner, along with the CWA's other Daggers, revealed at the Theakston's Old Peculier Crime Writing Festival in Harrogate on 22nd July. The CWA's Daggers celebrate the best in crime and thriller writing.
The longlist in full:
Congratulations to all the nominees!

The finalists for the 2011 Thriller Awards have been announced by the International Thriller Writers (ITW) organization, recognizing the best books and short stories published in this genre from the previous year. The winners will be announced this July during ThrillerFest VI.
The finalists are:


Universal Studios has released a new trailer for its sci-fi/western action thriller Cowboys & Aliens based on the graphic novel by Fred Van Lente, Andrew Foley, and Luciano Lima from an idea by Scott Mitchell Rosenberg.

The film is set in 1873 in the Arizona Territory. A stranger (Daniel Craig) with no memory of his past stumbles into the hard desert town of Absolution. The only hint to his history is a mysterious shackle that encircles one wrist. What he discovers is that the people of Absolution don’t welcome strangers, and nobody makes a move on its streets unless ordered to do so by the iron-fisted Colonel Dolarhyde (Harrison Ford). It’s a town that lives in fear. But Absolution is about to experience fear it can scarcely comprehend as the desolate city is attacked by marauders from the sky. Screaming down with breathtaking velocity and blinding lights to abduct the helpless one by one, these monsters challenge everything the residents have ever known.Now, the stranger they rejected is their only hope for salvation. As this gunslinger slowly starts to remember who he is and where he’s been, he realizes he holds a secret that could give the town a fighting chance against the alien force. With the help of the elusive traveller Ella (Olivia Wilde), he pulls together a posse comprised of former opponents –- townsfolk, Dolarhyde and his boys, outlaws and Apache warriors –- all in danger of annihilation. United against a common enemy, they will prepare for an epic showdown for survival.
According to the Bookseller, with the 50th anniversary of James Bond on the screen due to take place in 2011 Michael O'Mara have recruited Sir Roger Moore to provide a guide to the cars, gadgets and girls of the James Bond movies to help celebrate the spy series' 50th anniversary on the big screen. -----


Laura Wilson reviews a number of crime fiction novels in the Guardian (16 April 2011). These include Steve Mosby’s Black Flower’s and Patrick Easter’s The Watermen which introduces readers to a river policeman in what looks as if will be a great addition to the historical crime fiction genre.
The Bookseller also inform us that Headline have poached author Chris Kuzneski from Penguin with Headline publishing a new series about a team of treasure-hunting renegades.

Book2Book state that Jon Riley at Quercus has won the keenly contested multi-house auction for UK and Commonwealth rights excluding Canada in David Mark's debut literary crime novel The Dark Winter. Quercus will publish The Dark Winter as a lead title in Spring 2012. The Dark winter is set in Hull and East Yorkshire and introduces readers to Highland born DS Hector McAvoy. Far from being an alcoholic loner, McAvoy is obsessed with a need to understand the true nature of people and be the 'good' man he feels his beloved family deserve.

Orion have acquired The Child Thief the first of two new novels from Dan Smith. The Child Thief is a chilling story of murder and vengeance set in the frozen wastes of 1930s Ukraine and a dark tale of what happens when the family bond is torn apart.

An interesting article on the current trends in crime fiction can be found on the Shelves of books blog. However, it has always been known that crime fiction is the best genre to correlate social history.

Russian author Boris Akunin who is best known for his Erast Fandorin Series was recently at the London Book Fair as part of the British Council-organised Russia Market Focus cultural programme. Below he speaks to the British Council's Scott Andrews about his work, crime fiction in Russia and why his mother won't read his books!

The Telegraph’s Julia Handford with the retirement of Henning Mankell’s Kurt Wallender looks at a number of veteran sleuths who are still around.

The Independent has an interesting article about female cops on television which is a timely reminder of the fact that “Vera” which is based on the novels of CWA Gold Dagger winner Anne Cleeves is due to be shown on ITV1 on 1 May at 9:00pm. There is also Sophie Hannah’s The Point of Rescue that is due to be shown on 2nd and 3rd May on ITV to look forward to as well. Whilst The Point of Rescue is the title of the novel, the title used for the ITV televised version is Case Sensitive. See here for an earlier blog about the television programme.

A very brief but interesting interview with Donna Leon can be found in the USA Today where she talks not only about her character Brunetti but also her love of Venice. 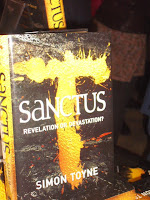 Debut author Simon Toyne recently had his book launch for Sanctus the first in a trilogy at Waterstones Piccadilly. In the run-up to the book launch Monks could be found out various train stations handing out extracts from the book to commuters. 5 videos were also launched and they can all be found here. 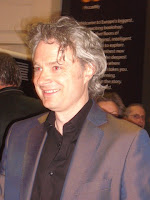 The launch went very well indeed and a large number of family, friends, reviewers and members of the public joined Simon in helping him celebrate the publication of his book. (Pictures @Ayo Onatade)

Alibi has teamed up with HarperCollins and Theakstons Old Peculier Crime Writing Festival, Harrogate to unearth some of the country's hottest new crime-writing talent of 2011. More information can be found here.
An informative article in the Metro about e-book piracy and the effect that it is having on author's and their work.
Arminta Wallace in the Irish Times writes on whether or not Italy is becoming the new place to write about instead of Scandinavia.
According to Yahoo News Star Trek director J J Abrams is due to write a thriller which is to be published by Mullholland books. The title is currently unknown.
It has been announced that The Specsavers Crime Thriller Awards in Oct will follow a 6 part Crime Thriller documentary series on ITV3 called 'A-Z of Crime Writing'
According to the Guardian, the new Sherlock Holmes novel that is being written by Anthony Horowitz is due out in November. The novel The House of Silk is narrated in first person by Dr Watson.
The Telegraph have a good article about the filming of the forthcoming televised version of the Kate Summerscale novel The Suspicions of Mr Whicher.
Posted by Ayo Onatade at 18:56