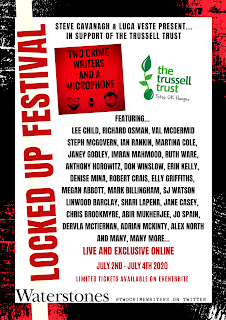 Struggling families are to receive a lockdown boost as some of the biggest names in the world of crime fiction come together to raise money for food banks. Household names such as Lee Child, Val McDermid, Richard Osman, Martina Cole, Ian Rankin, Ruth Ware, Don Winslow and Anthony Horowitz are teaming up with TV celebrities such as Steph McGovern and Janey Godley to raise money for the foodbank charity Trussell Trust. They are all taking part in an online charity festival called ‘The Locked Up Festival’, that is the brainchild of Steve Cavanagh and Luca Veste, the authors behind the hit podcast Two Crime Writers and a Microphone.
With so many writing festivals cancelled for the foreseeable future, the voices behind the podcast Two Crime Writers and a Microphone have created (yet) another online festival, but one with a difference. Anyone who listens to the podcast knows that they approach interviews and book news with a slightly different edge to others – preferring the irreverent, than the norm. Taking that ethos from the podcast, they have put that into practise with planned events and talks that won’t be the usual chat you will hear at other festivals.
In the recent pandemic, more people have been using foodbanks than before. As reported in the Guardian, “The Trussell Trust, the UK’s biggest food bank network, said it gave out 89% more food parcels in April, compared to the same month last year”, which shows the need for support for those struggling.
Across three days, forty authors, broadcasters, and comedians, will appear on panels such as ‘The Worst Book Event in My Life’, ‘Am I the A**ehole’, and ‘TV Heaven and Hell’. Events guaranteed to provide something a little different for those watching. All panels and ‘In Conversations’ will be streamed live to Zoom attendees and exclusive only to ticketholders.
Tickets will cost £20 for a full weekend pass, hours of entertainment, giveaways, competitions, with all proceeds from the festival going directly to The Trussell Trust. They’re available now from Eventbrite.
Waterstones are the official bookseller for the festival and a discount code will be available to all attendees for specific sales related to the panellists books. More details on their website.
Statement from Luca & Steve -

Both of us grew up working class and relied on charities at various times during our childhoods (and beyond). We’ve been acutely aware that food banks have been put under immense pressure because of the lockdown and job losses that occurred due to the pandemic. We wanted to do something to give back to a charity like the ones which supported us when we needed it. Therefore, we have partnered with the Trussell Trust, who support 2/3 of the UK's food banks, to raise much needed additional funds for them. We are both incredibly grateful to the many authors, comedians, and TV presenters who have come onboard, and we promise a weekend filled with laughter, intrigue, and a little bit of crime book talk.
Statement from Emma Revie, chief executive of the Trussell Trust
“We are so grateful to Steve and Luca, and everyone involved at the crime writing festival, for raising vital funds in order to support our work. Every donation will help us continue to support our network of food banks to provide the best possible emergency help to people referred at an uncertain time.
“We’re working closely with our network to understand each food bank’s situation, and how we can best support them. Wide-ranging conversations are continuing with national partners, exploring how we can work together to help ensure people can access support in the coming weeks, how we get vital food to the places it’s most needed, and how we can help boost volunteer numbers in areas where extra volunteers may be needed.
“Everyone should be able to afford their own food and the support from this festival will help people get the emergency support they need today, while working towards a future where people have enough money for the essentials in life.”
About Two Crime Writers and a Microphone - Two Crime Writers and a Microphone is a podcast launched in 2017 and has built through live events into one of the most popular lit podcasts with thousands of listeners per week. Hosted by bestselling crime writers Steve Cavanagh and Luca Veste , over 100 episodes of the show have been released with some of the biggest and best crime writers in the business as guests.