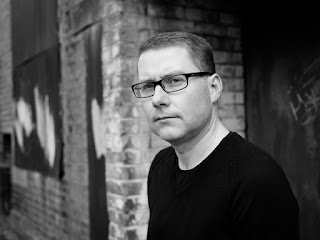 In the dim and distant past, when we were still allowed to travel, I attended a book event in Thessaloniki. It was a quiet Tuesday night in the provincial Greek city and I must confess to being a little nervous about the attendance level - the fear of an empty store never quite leaves an author. As it turned out, I needn’t have worried, the good folk of Thessaloniki turned out in force and a boisterous event ensued.

It was at the end of the evening that things became particularly spirited. As I added my signature to her purchase, a middle-aged lady engaged me in conversation, expressing her strongly-held opinions about D.I. Helen Grace, my series protagonist. Gripping my arm, she declared: “Helen Grace must get married. And she must have babies. She must be happy…” I was slightly taken aback, but happy to chat, and five minutes later, I got my arm back. Turning to the next customer, I was surprised to see that this lady had a perplexed and unhappy expression. Leaning in close, she whispered: “Helen Grace must never get married. It would be a betrayal of her character….”

I left the event with a slightly bruised arm and plenty to chew on. For these two readers had inadvertently hit upon the key challenge faced by any series writer - how to develop and evolve your protagonist, whilst somehow keeping him or her exactly the same? How do you move their story, their life, their character on, whilst simultaneously keeping hold of the characteristics, flaws and personality that drew readers to your creation in the first place?

It’s an issue that’s been at the forefront of my mind of late, as I pondered where to take Helen Grace next. As I sat down to write the ninth instalment of the series, All Fall Down (out June 11th), I found myself facing a difficult dilemma. At the end of the previous book, Helen had found herself in a fledgling relationship, with fellow officer DS Joseph Hudson. As loyal readers will know, this is an unusual situation for Helen. Because of her difficult family background, her disastrous history with men and her innate desire for privacy, romantic liaisons have been few and far between. So how should I play this one out? Would this end up being yet another near miss for Helen? Or could it be the start of a new chapter for Helen? A new life involving love, commitment or even – whisper it – marriage and kids? A few books ago this would have seemed impossible, but now…?

Such new vistas are exciting for a writer. What would Helen be like in a monogamous, fulfilling relationship? What would she be like if she fell pregnant? Being a parent fundamentally alters your outlook on life, so wouldn’t it be fun to explore this  change through my series protagonist? It would no doubt be a challenging, illuminating journey…yet what if it somehow “neutered” her? What would Helen be like if she suddenly had to worry about childcare, or a husband waiting at home, or kids’ birthday parties and the school nativity? Would this be a step too far for a woman who spends her life chasing down vicious serial killers? Would I have lost something by taking her down this path?

Many august crime writers have wrestled with this dilemma, coming to very different conclusions as to the best route forward. Lee Child took the bold and brilliant decision not to age his protagonist Jack Reacher, making him an ageless, mythic hero, dispensing justice wherever he goes. Sadly, I’ve missed that boat with Helen, who’s proved unable to cheat the ageing process, so perhaps I should follow the lead of Ian Rankin and Michael Connolly. Their brilliant creations, John Rebus and Harry Bosch, have aged more or less in real time, so their physicality, attitude, abilities have changed over the years. Their drive and desire for justice has remained undimmed, of course, but both have had to adapt to changing conditions (as they stepped away from being a police officer) and growing personal limitations, leading to an interesting deepening of their characters. Or perhaps I should take a lead from long form TV drama (my day job) – where the golden rule for any series protagonist is that you take them on a long, difficult journey over the arc of the story…only to land them right back where they started come the end.

There is no correct answer, of course, no right path for Helen. But one thing is certain - whichever route I choose in All Fall Down, one Greek lady will be left disappointed. 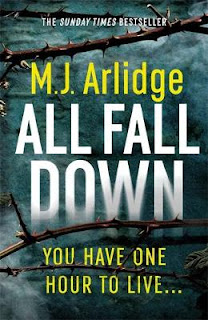 All Fall Down by M J Arlidge (Headline)
"You have one hour to live."  Those are the only words on the phone call. Then they hang up. Surely, a prank? A mistake? A wrong number? Anything but the chilling truth... That someone is watching, waiting, working to take your life in one hour.  But why?  The job of finding out falls to DI Helen Grace: a woman with a track record in hunting killers. However, this is A case where the killer seems to always be one step ahead of the police and the victims.  With no motive, no leads, no clues - nothing but pure fear - an hour can last a lifetime...

All Fall Down  by M.J Arlidge is published in hardback by Orion Books on 11th June