Murder, Marple and Me!

"The only truth in what you're about to see is that our protagonist, Miss Margaret Rutherford to most, Peggy to others, didn't want anybody to know the truth"

For most people if you ask them who is the definitive Miss Marple they will of course say Joan Hickson. However, when Margaret Rutherford was approached to play Miss Marple  it nearly did not happen for so many reasons. 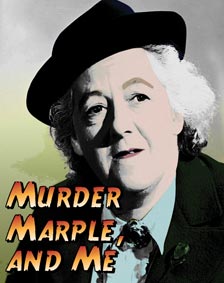 In Murder, Marple and Me, Rutherford and Christie are united to unearth the poignant tragedy behind Margaret Rutherford's horror .... of horror.

I went to see a preview show of this play at The Hob in Forest Hill before it transfers to the Edinburgh Festival.  It is a superb show with a great and witty script by Philip Meeks, outstanding acting by Janet Prince and brilliant directing by Stella Duffy.

This is a one-man show (or should one say this is a one lady show?) Nevertheless, I am not going to give the plot away but will say that Janet Prince who plays Rutherford, Christie and the spinster is a delight.  She takes on the various roles not only with aplomb but spritely and with a twinkle in her eye that I would find it difficult to appreciate anyone else in the role.  She came out with some one liners that had the audience laughing out loud with sheer joy. A number of Christie books were referenced in the play as well as Sam Spade and Philip Marlowe.  There were times when the play was a bit melancholy but be assured the occasions were few and were totally appropriate with what was being said.  It is a shame that I am not going to the Edinburgh Festival because Murder Marple and Me would be on the top of my list of shows that I would have to see.  Please do go and see it.

Murder, Marple and Me can be seen at the Gilded Balloon, Wee Room from 1st to 26th August 2012.  Tickets can be purchased here.

I do hope that they bring it back to London after the Edinburgh Festival even if it is only for a short run.  This is certainly a play that should not only be seen by all lovers of crime fiction but also and especially those who  enjoy Agatha Christie and would like to know what really happened  between her and Margaret Rutherford along with the relationship that developed.