The UK cover reveal for the eagerly awaited new novel by John Grisham happened yesterday 18th July 2013. SYCAMORE ROW is Grisham’s 31st work of fiction and publishes on October 22nd 2013. It returns to the world of his first novel, A TIME TO KILL and features hero lawyer Jake Brigance in what promises to be a heady tale of suicide, contested wills and racial tension in America’s Deep South.

To celebrate publication and reward John’s loyal fans, the first edition will be a special run of just 5,000 copies. Known as the ‘Trunk Edition’ this exclusive printing will contain extra material in the form of a short story and will also carry a facsimile of the author’s signature. 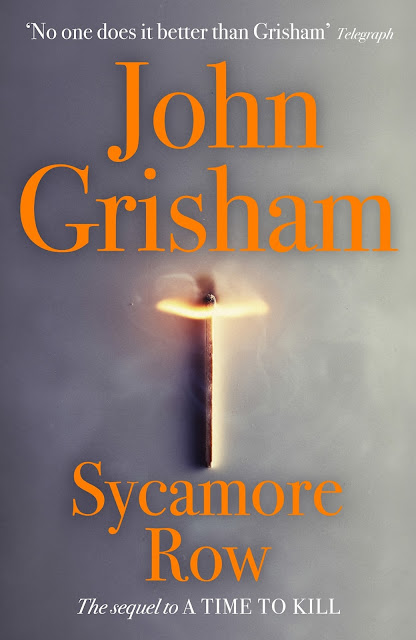 The ‘Trunk Edition’ is designed to echo the very first publication of A TIME TO KILL back in 1989 by a small independent American publisher. An unknown writer at the time, John Grisham had to buy up copies of the 5,000 copy print run to sell out of the trunk of his own car. After a faltering start, he decided to write one more book before giving up his dream of writing completely. This book was THE FIRM and the rest is literary history…

A TIME TO KILL has gone on to sell 19 million copies worldwide as well as become a major Hollywood blockbuster starring Matthew McConaughey, Samuel L. Jackson and Sandra Bullock.

John Grisham has become an internationally bestselling author, with 275 million copies of his books in print around the world. Seven of his novels have been filmed, with several more currently in pre-production.

The accompanying video clip features previously unseen footage of John talking about his experiences of publishing A TIME TO KILL and why he decided to finally to return to Ford County and write SYCAMORE ROW.

This Trunk Edition is available to pre-order now from all major book retailers and once all copies have been sold, the standard hardback will be available.

For further information please contact Kerry Hood on 020 7873 6l73 or at Kerry.hood@hodder.co.uk