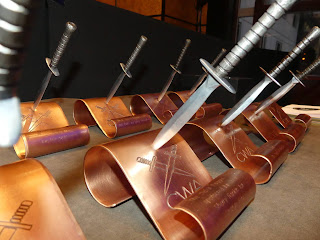 Budding authors are invited to submit the opening of their novel to the coveted Crime Writers’ Association (CWA) Debut Dagger competition 2021. The international writing competition opens for entries on October 1. Created in 1955, the Daggers are the oldest and most regarded awards in the genre, and for over two decades the CWA has been encouraging new writing with its Debut Dagger competition for unpublished writers. Submissions are judged by a panel of top crime editors and agents and all shortlisted Debut Dagger entrants receive feedback from the judges about their entries. Moreover, all shortlisted entries are sent to UK agents and publishers of crime fiction.

Anyone is eligible who has not had a full-length novel published by a traditional publisher and who, at the time of the competition closing, has not got a contract with a publisher or literary agent. Independently published authors, provided they fulfil the criteria above, are eligible to enter. Entries must send in their first 3,000 words and a 1,500-word synopsis of their novel. Writers do not need to have completed their novel in order to enter. The competition has helped launch the careers of established crime writers, including M W Craven, who entered the 2013 CWA Debut Dagger competition.

M W Craven said: “Little did I know that it would go on to change my life.” Craven was offered a publishing contract by an independent publisher who were influenced by the shortlisting. He went on to write The Puppet Show, which sold to Little, Brown and went on to win the CWA 2019 Gold Dagger for Best Crime Novel of the Year. It has been sold in 17 foreign language territories, and TV rights have also been sold. “All this success,” Craven said, “comes from entering the Debut Dagger.” Linda Stratmann, Chair of the CWA, said: “Winning the Debut Dagger ensures your work will be brought to the attention of leading agents and top editors, who have to date signed up over two dozen winners and shortlisted Debut Dagger competitors.” Leanne Fry, who was shortlisted for the Debut Dagger 2020 for Whipstick, said: “The CWA Debut Dagger shortlisting has sparked the sort of interest from agents and publishers that a new writer bashing out her first manuscript on the other side of the world could only dream of. I knew I needed to get my work in front of industry professionals which is why I sucked up the self-doubt and entered the Debut Dagger. It’s been a fantastic experience and I’d encourage every writer out there wondering what on earth to do with that manuscript they’ve been labouring over to submit to next year’s Debut Dagger.”

The winner, who also receives £500, will be announced at the annual CWA Dagger Awards ceremony. Also launched on October 1 is the annual CWA Margery Allingham Short Mystery Competition. The Margery Allingham Society, set up to honour and promote the writings of the great Golden Age author, works with the CWA to run the writing competition. Submissions have a limit of 3,500 words and stories must pay homage to the author’s definition of a mystery. The winner is awarded £500. Linda added: “We’re proud to offer support and advice for writers at all stages of their career. Alongside our writing competitions, we host a welcoming Debuts community on Facebook where budding authors can ask questions, share experiences and help out fellow writers. The CWA’s Debuts mailing list provides information on author events, courses and the writing process via the monthly CRA & Debuts Newsletter, as well as an ezine – Case Files – showcasing the latest crime writing.”

The closing date for submissions to both competitions is 6pm on Friday 26 February 2021.

For tips, case studies of shortlisted and winning Debut Daggers, and full details on how to enter both writing competitions, go to - https://thecwa.co.uk/the-debuts