Identifying six of the best Cold War crime books is a bit of a trick question – not just Cold War books, but Cold War crime books. That seems to rule out, for example, the likes of classic Cold War “weapons tech” thriller The Hunt for Red October (unless you count stealing a nuclear submarine as a crime). And what about The Spy Who Came in from the Cold? The death of an agent gets the ball rolling but the novel is not about that killing.

Indeed, there are plenty of Cold War tales with murder and skulduggery in them but which are not crime novels. Or are treason and espionage catch-all crimes (or acts of heroism, depending on your viewpoint) that bring many of the classics back into contention?

We decided to interpret the rules freely. Here are six excellent books with a Cold War setting and a heavy dose of criminality.

Polar Star: All of the initial trilogy of Martin Cruz Smith’s Arkady Renko novels are brilliant, and all kick off with a crime. But the second book wins on tension and atmosphere, perhaps because its hero has nowhere left to run. Renko is on the Polar Star, a ship fishing in the freezing waters between Soviet Russia and Alaska. A murdered crew member returns to the surface after being snagged in a fishing net and Renko, a former investigator with an unreliable political past, has to solve the mystery. All Soviet life can be found onboard, with the mysterious Westerners floating alongside.

Child 44: Tom Rob Smith’s bestseller is as much a personal drama as a thriller, and its emotional impact comes from the author’s focus on the jangling emotions of his protagonist, Leo Demidov. Demidov, an MGB captain, is forced to pursue a murderer in a society that refuses to admit murder exists. The brutal serial killer is based on the real-life Andrei Chikatilo, also known as the “Rostov Ripper”, but Rob Smith transplants Chikatilo’s crimes to the Soviet Union of the 1950s. As well as having one of the best prologues ever, Child 44 takes you into the mind of the killer through the redemptive journey of a detective who is almost as conflicted himself.

The Third Man: Graham Greene wrote a few other candidates for a place in any list of Cold War literary thrillers – The Quiet American and Our Man in Havana spring to mind. But even though The Third Man was first written as a novella simply to help inform the script for film producer Alexander Korda and not meant for publication, it wins a place here for perfectly capturing the mood of the times. Just like the famous zither music Anton Karas wrote for Korda’s film, the bleak noir sensibility of The Third Man stays with you long after you have finished it.

Stasi Child: Oberleutnant Karin Müller, an East Berlin cop, finds herself in the unwelcome company of the Stasi as she investigates the murder of a teenage girl who appears to have been shot by Western guards while trying to escape to the east. Fairly obviously, all is not what it seems, and a parallel narrative from the point of view of Irma, a girl who is virtually imprisoned in an East German workhouse, leads us to a particularly repellent crime implicating the highest levels of the regime.

Tinker, Tailor, Soldier Spy: More than anything, the Cold War was a mood – a high-pressure system of mistrust lingered for nearly 50 years. John Le Carré is the master translator of its mundane calumnies, andTinker, Tailor is perhaps his greatest novel. An ex-MI5 and MI6 officer himself, he used this personal experience to transplant the real-life skulduggery of Kim Philby and create George Smiley – a fastidiously polite, umbrella-carrying, British Torquemada – as his grand inquisitor. The characters live and breathe on the page, the plotting feels as effortless as a street vendor’s game of “Find the Lady” and that Cold War mood is note-perfect. Admittedly, not a crime story per se but one of the best detective stories ever written.

Fatherland: Counterfactual Cold War – Robert Harris’s thriller about a plot to bury the atrocities of the Holocaust in order to facilitate a thaw between America and Nazi Germany, rivals in this alternate universe. Xavier March of the Kripo is looking into the death of a high-ranking Nazi when he discovers that participants in the Wannsee conference, at which the “Final Solution” was formalised, have been turning up dead. With the help of an American journalist, March determines to reveal the truth. 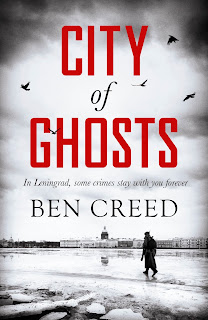 City of Ghosts by Ben Creed (the pen name of Barney Thompson and Chris Rickaby) is published on 15th October by Welbeck, price £8.99 in paperback original)

Leningrad, Russia, 1951. The shadow of war lingers. Revol Rossel - once a virtuoso violinist with a glittering future - is now a humble state militia cop, forced to investigate desperate crimes in this desperate era. But when five frozen corpses are found neatly arranged between railway lines, Rossel is faced with the most puzzling - and most dangerous - case of his career. His hunt for the truth leads him to the dark heart of Leningrad's musical establishment, and, ultimately, to the highest levels of the Kremlin itself. It's a world he knows intimately. A world where his dreams were shattered. A world where a killer may now be hiding...