This smacks of Sour Grapes

No sooner than the nominations for the Man Booker are announced, someone has to get the first strike in. Enter Jamie Byng of Cannongate Books. Writing in the online forum on the Man Booker Prize's website, Byng stated: "I cannot respect a judging committee that decides to pick a book like Child 44, a fairly well-written and well-paced thriller that is no more than that, over novels as exceptional as Helen Garner's The Spare Room or Ross Raisin's God's Own Country."
In the Independent, Boyd Tonkin wonders why James Kelman's Kieron Smith, Boy was left off the list, but mainly praises the titles that made it. "Some less predictable contenders merit a cheer," he adds, and of Child 44, he says: "With his Stalin-era investigator in Child 44, Tom Rob Smith achieves what has so far eluded the Rankins and Jameses: a penultimate-round Booker run for an upscale detective novel."
Just as with any competition, you can't please all the people all of the time.
Posted by Mike Stotter at 14:18 4 comments:

Tom Rob Smith's Child 44 has today been announced on this year's Man Booker longlist. SHOTS was amongst the first to bring the book to reader's attention when Ali Karim interviewed him. So we just love it when someone we have championed comes through. Look at the authors we have been first to feature: Nick Stone, Roger Jon Ellory and Simon Kernick.

A debut novelist who has taken the literary world by storm has won the Theakston Old Peculier Crime Novel of the Year Award.
The Tenderness of Wolves (Quercus), by Stef Penney, was chosen by the Theakston panel of judges against competition from 12 other best-selling top authors including Alexander McCall Smith, Peter Robinson and Mark Billingham.
Story in The Yorkshire Post
Posted by Mike Stotter at 11:55 No comments: 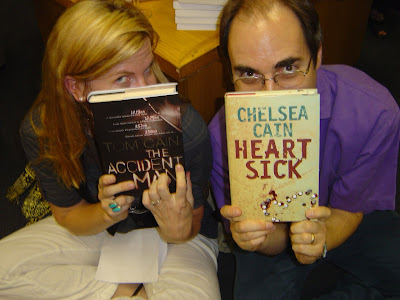 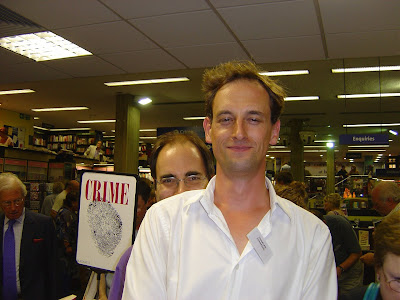 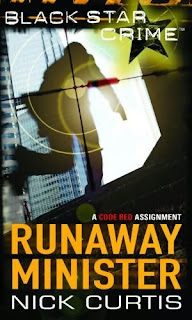 Posted by Mike Stotter at 20:55 No comments:

IS THIS A DAGGER I SEE BEFORE ME?

I was amongst the 100 people attending the 2008 CWA Duncan Lawrie Dagger Award dinner last night. It turned into an evening full of surprises and emotional speeches. Yes, Frances Fyfield?

And the runners and riders are:

Also nominated: The Patience of the Spider, by Andrea Camilleri, translated by Stephen Sartarelli (Picador, Macmillan); The Girl with the Dragon Tattoo, by Stieg Larsson, translated by Reg Keeland (MacLehose Press, Quercus); A Deal with the Devil, by Martin Suter, translated by Peter Millar (EuroCrime, Arcadia Books); and This Night’s Foul Work, by Fred Vargas, translated by Sîan Reynolds (Harvill Secker, Random House)

Also nominated: Ritual, by Mo Hayder (Transworld); I See You (aka The Crime Writer), by Gregg Hurwitz (Little, Brown); and Shatter, by Michael Robotham (Sphere/Little, Brown)

Also nominated: The Art of Political Murder: Who Killed Bishop Gerardi, by Francisco Goldman (Atlantic Books); Violation, by David Rose (HarperPress); The Lost Boy, by Duncan Staff (Bantam Press); The Suspicions of Mr. Whicher, or The Murder at Road Hill House, by Kate Summerscale (Bloomsbury); and Into the Darkness, by Peter Zimonjic (Vintage Books, Random House)

CWA Dagger in the Library (awarded each year to “the author of crime fiction whose work is currently giving the greatest enjoyment to library users”): Craig Russell

Also nominated: Desert Storm, by Russell Colman (Canada); The Eclipse of Lilith, by Peter Dewar (UK); Nite Lite, by Bill Harrison (Canada); The Stench of Lilies, by Alison Marlow (UK); The Book of Souls, by James Oswald (UK); Wearing the Spider, by Susan Schaab (USA); Devils and Disciples, by Ian Simpson (UK); and All the Wrong People, by P.J. Watson (USA)
Posted by Mike Stotter at 14:16 No comments: