The Party's Over by Chris Ould

The process of finishing writing a novel is an oddly protracted sort of affair, a bit like the aftermath of throwing a party. The last guest leaves an hour later than you'd really hoped, but when you finally close the door it's over: the end.

In the same way, after six months or so of partying with the characters in your novel, you finally write the denouement, you think up the curtain line and type The End. You have a book (in this case The Fire Pit) and you've told your story. That's it.

Except it isn't really. Just like the party, you still have the clearing up to do: the glasses to wash (the copy edit); the empty bottles to recycle in the morning (the proofs); and then – a long time later – the credit card bill comes in (publication day) for all that beer and prosecco you bought for festivities you can now barely remember.

Well, that's how it is for me, anyway. I've never had much difficulty in wiping the details of the last book I wrote from my memory and moving on to the next. At editorial meetings I've been known to forget the names of central characters and who did what and why, which can make people suspicious that I didn't actually write the book at all, but maybe hired someone to do the hard work instead. Unfortunately, not so.

I think the memory-wipe thing stems from years spent writing TV scripts, when there was no time to sit back and ruminate on what you'd just written. Instead, as soon as the last draft was complete, you'd be given a new brief and a new delivery schedule to be met.

The same was true in some ways of the Faroe Islands trilogy. For the last three years (longer if you count the research time before I started writing) once one book of the series was finished the next was there, waiting to be tackled.

Of course, given that the central characters – British DI Jan Reyna and Faroese detective Hjalti Hentze – and much of the setting remained the same in the books, moving from The Blood Strand to The Killing Bay, and then to The Fire Pit was more like picking up where I'd just left off. True, the plots and the crimes in each book are different and mostly unrelated, but I'd had all three mapped out from the start so I suppose I never got to the point of memory-wiping because what had happened before was still germane to what was happening on the page now.

But more than three years spent in the company of the same characters is a long time, so it's not unreasonable when people ask if I'll miss them now that the party really is over.

Like most novelists, I suspect, the truthful answer is both yes and no. When a character is familiar enough that you can have fun writing them it's harder to let them leave than the ones who are argumentative and awkward. You may even invite the entertaining ones back again – once you've cleared up, naturally – but the others, not so much.

What I will miss, though – and without reservation – are the Faroe Islands themselves. I went to some pains to represent them as accurately as I could in the books, from the high, brooding mountains to the fog shrouded or sun-saturated fields and beaches, and in the course of my visits there the place got under my skin. In many ways the Faroes became as much a character in the books as the people I created to populate them, but because the islands are overwhelmingly and dramatically real they've stamped a very definite impression on me.

So, although the exact details of murders, deceptions and who did what in the Faroes trilogy will inevitably slip my mind now that I've moved on to a new project, it just so happens that a Danish friend recently invited me to a reunion party in the Faroes next year. A reunion with the islands is something I'd never pass up so I've already said yes and it's in my diary. Not that I'm likely to forget.

The Fire Pit, the final novel in the Faroes series is published this week. Together with The Blood Strand (2016) and The Killing Bay (2017) it is published by Titan Books. Chris Ould is on Twitter @WriterChrisOuld 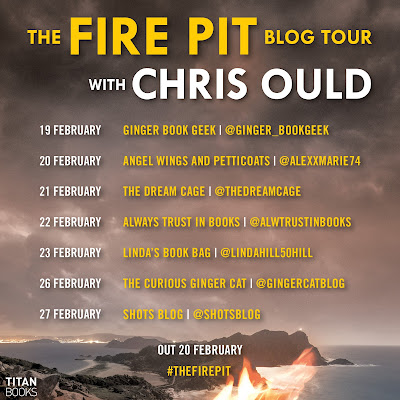 The Fire Pit by Chris Ould published by Titan Books
In the wake of a dying man’s apparent suicide, the skeleton of a young woman is discovered on a windswept hillside. Detective Hjalti Hentze suspects that it is the body of a Norwegian woman reported missing forty years earlier, while a commune occupied the land, and whose death may be linked to the abduction and rape of a local Faroese girl.  Meanwhile British DI Jan Reyna is pursuing his investigation into his mother’s suicide. But as he learns more about her final days, links between the two cases start to appear: a conspiracy of murder and abuse spanning four decades. And as Hentze puts the same pieces together, he realises that Reyna is willing to go further than ever before to learn the truth…

Call for Papers: Monograph on the female detective on TV.

Because The Basic Human Form is Female: The female detective in Television. Edited by Anna Backman Rogers and Laura Nicholson.

For decades, the female detective has occupied space within a genre that is all-too-often reserved for the celebratory storylines of self-sacrificial men. She has served to break down sexist barriers placed before women within professional and personal frameworks, acting as an on-screen surrogate for (female) spectators, globally. The female detective has succeeded in cultivating widespread audience attention and high ratings for multiple series across the world, underlining the popularity of, and desire for, the women-led, crime TV genre. It is curious then, that critical literature exploring this central figure’s contemporary, cultural significance is scarce. Given the abundance of on-screen material that has been produced throughout years of prime-time TV and (more recently) online streaming, it seems the female detective, in all her guises, has yet to be afforded the praise and exploration she deserves.

In response to this paucity of critical text, we are assembling the foundations of a special collection on the female detective in crime TV, in the format of a book to be edited by Anna Backman Rogers and Laura Nicholson. The proposal for this research comes just as we are witnessing a cultural ‘boom’ in detective shows featuring women as driving forces, across multiple media platforms. As such, the need for critical literature that explores the feminist realisations and potential of the female detective and her contemporary cultural importance, is timely.

We are calling for papers from scholars across disciplines, in order to shed light on the legacy of the female detective and the ways in which these powerful characters continue to inspire far-reaching audiences, while responding to the socio-political backdrop of their time.

We especially encourage papers from LGBTQ+, Feminist and BME scholars. We also seek contributions from a global perspective that bring to the fore series that we may be unaware of.

We hope to approach a major university publisher with this project after final decisions made by the editors on the collection.

Please send proposals of no more than 600 words to Laura Nicholson and Anna Backman Rogers before March 5th, 2018 at the following e mail addresses :- Anna.backman.rogers@gu.se and lauracate.nicholson@gmail.com

Call for Papers: Murder, She Tweeted: Crime Narratives and the Digital Age

The advent of new technologies and digital media have transformed society and influenced cultural narratives. The changes brought about by technological innovations, digitalisation, and globalisation have affected not only the subject matter and themes of contemporary crime narratives but also the production, distribution, and consumption of crime fiction on the global market, as well as the analytical tools, techniques, research methods, and theories available to scholars.

These changes are readily visible in detectives' digital investigations or in how criminals employ digital technology in committing cybercrimes such as online stalking or theft. Moreover, the potential of digitalisation in modifying crime narratives nowadays ranges from podcasts such as "Serial" to Sherlock Holmes fan fiction to transmedia narration in "Sherlock" and the Twitter adaptation of Agatha Christie's The Body in the Library.

We invite proposals for paper presentations on crime narratives and the digital age from different language and cultural spheres. The conference's approach to crime and the digital context is wide and covers a variety of contemporary crime narratives (e.g. novels, films, TV series, adaptations, true crime, fan fiction, vlogs, blogs and other social media) that can be examined in a number of ways.

We would like to welcome proposals which address one or several of the following topics (please note that the list is by no means exhaustive):

Please submit your proposal (max 300 words for individual presentations; for panels, please submit titles and abstracts of each paper) and a short biographical statement (including name, email address, institutional affiliation) to t.helen.mantymaki@jyu.fi and maarit.piipponen@uta.fi as attachments in rtf or doc format by March 20, 2018.

Conference fee: there is a conference fee of 70 euros (coffee, lunches, reception) and participants are expected to cover all costs for travel, accommodation, and subsistence themselves.