Call for Papers: A Study in Sidekicks: The Detective’s Assistant in Crime Fiction

‘I am lost without my Boswell’, Sherlock Holmes says of his trusty sidekick Dr John Watson in ‘A Scandal in Bohemia’ (1891). Biographer, narrator, observer, assistant, companion, conscience, foil, fool, audience surrogate – the role of the detective’s sidekick is multifaceted, complex and continually evolving.

This collection aims to explore the changing representations and functions of the detective’s sidekick across a range of forms and subgenres of crime fiction from the nineteenth century to the present day. Forms may include: magazine short stories, serial or non-serial novels, ‘penny dreadfuls’, juvenile story papers, dime and half-dime novels, comics and graphic novels, radio drama, stage plays, film and television, video games. Genres may include: sensation fiction, the locked-room mystery, Golden Age detective fiction (including the clue puzzle and the hard-boiled detective novel), the police procedural, historical crime fiction, supernatural crime fiction, the serial killer thriller, the psychothriller.

SLEEPING WITH THE FISHES
10:00 - 11:00am
Nick Quantrill & David Mark
vs.
Lilja Sigurdardottir & Quentin Bates.  The panel look at the style, influence and distinctions and conflicts of Hull and Iceland as locations and inspirations for crime writing.

BREAK
12:30 - 1:30pm
​
INTO THE DARKNESS : THE NEW NOIR
1:30 - 2:30pm
As eras come and go and each generation defines itself by what came before. Jake Arnott, Emma Flint, Joseph Knox and Cathi Unsworth look at the challenges of writing contemporary noir fiction and the power of historical setting.

TEA
4:30 - 6:45pm
​
MARTINA COLE : A CRIME WRITING SILVER JUBILEE
7:00 - 8:00pm
The most borrowed author in prison libraries; the most shoplifted from British bookshops:  best-selling Queen of British crime fiction, Martina Cole, celebrates the 25th anniversary of the publication of her first novel, Dangerous Lady, in the company of critic, author and crime fiction aficionado, Barry Forshaw.

GETTING AWAY WITH MURDER : GOLDEN AGE VS DIGITAL AGE
10:00 - 11:00am
From wire messages, telegrams and Hansom cabs to new tech, dark web and the emergence of new formats, Abir Mukherjee, Rachel Rhys and Matt Wesolowski discuss the influence of technologies on crime writing and publishing with Ayo Onatade.

BEHIND BARS : FREEDOM, OPPRESSION & CONTROL
11:30 - 12:30pm
With a background of Hull’s historical links to the slave trade abolitionist William Wilberforce and traditions of resistance, Eva Dolan, Kati Hiekkapelto, Stav Sherez and William Ryan explore ways in which crime fiction deals with characters living under oppression or imprisoned by circumstance.

BRAWLERS & BASTARDS
2:30 - 3:30pm
From Bill Sikes through Jack Carter and beyond, Steph Broadribb, Mick Herron, Harry Brett and Craig Robertson look at the ways in which crime authors redeem the irredeemable and create antiheroes from the most unlikeable protagonists.

A YEAR IN THE LIFE
4:00 - 5:00pm
Bringing the festival to a close, Mark Billingham and John Connolly take a not entirely serious look at their writing years with Daily Telegraph crime fiction critic, Jake Kerridge. The best, the worst; a year to remember, one to forget; the tears, tantrums and triumphs of a crime writing life.

Finalists for the Mcilvanney Prize announced

FIVE FINALISTS ANNOUNCED FOR THE McILVANNEY PRIZE SCOTTISH CRIME BOOK OF THE YEAR AWARD 2017
Winner to be presented at Opening Reception of Bloody Scotland International Crime Writing Festival at Stirling Castle on Friday 8 September
A panel of judges including comedian and crime fan Susan Calman, writer Craig Sisterson and Programmer of Granite Noir, Lee Randall, today reveal the five finalists for The McIlvanney Prize from a twelve strong longlist featuring some of the best names in Scottish crime fiction.

The finalists include two of the best-known women in Scottish crime – Val McDermid and Denise Mina; a former winner of the prize, Craig Russell; one of the founders of Bloody Scotland, Craig Robertson and a relative unknown, Jay Stringer.

The winner of the Scottish Crime Book of the Year will be awarded The McIlvanney Prize in memory of William McIlvanney at the opening reception at Stirling Castle on Friday 8 September (6.30-8.30pm) and followed by a torchlight procession – open to the public – led by Ian Rankin on his way down to his event celebrating 30 years of Rebus. The award recognises excellence in Scottish crime writing, includes a prize of £1000 and nationwide promotion in Waterstones.

The judges explained why each book made the final five: 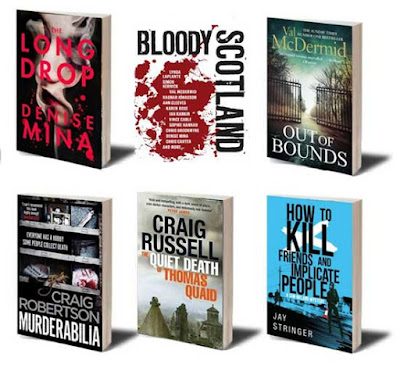 Val McDermid - Out of Bounds (Little, Brown)
'The Queen of Scottish crime adds yet more jewels to her crown with Out of Bounds and shows us why she's writing at the very top of her game…Karen Pirie is one of the most engaging and charismatic of all the fictional Scottish Detectives'

Denise Mina - The Long Drop (Random House)
'This elegantly written novel confirms Denise Mina's stature among the great Scottish crime writers…The Long Drop transports you to the pubs, grubby back alleys and courtrooms at the heart of this unsavoury chapter of Scottish history'

Susan Calman said:
'As a long term reader of Scottish crime books it has been a dream come true to judge this year's McIlvanney Prize'

Craig Sisterson said:
'Reading the books for the prize has been a pleasure and a privilege, and has convinced me that Tartan Noir is a sparkling gem on the global crime-writing stage'