Congratulations to all the nominees!
Posted by Ayo Onatade at 23:26 No comments:

Sarah Weinman has an excellent interview that took place between herself, Colin Harrison and James Ellroy on her website. The interview was done during Book Expo American on May 29. It can be found here. I am not sure how long it is going to be up for but I would certainly urge fans of both James Ellroy and Colin Harrison to have a look at it. Sarah does a wonderful job in the interview.
Posted by Ayo Onatade at 13:56 No comments:

For those of you that won't be going to Harrogate this year, this event may be your only opportunity to see these two brilliant writers together.
Posted by Ayo Onatade at 21:16 No comments: 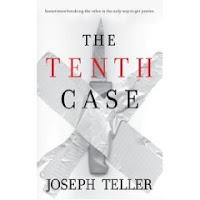 1886-1975) was the author of over seventy novels and stories featuring the brilliant, irascible, and corpulent private detective Nero Wolfe, a lover of food, beer, and orchids. Stout was named a Grand Master by the Mystery Writers of America in 1959 and his Nero Wolfe stories continue to be popular throughout the world.
The Wolfe Pack has been around since 1978, and celebrates all things Nero Wolfe. For example, the society publishes a semi-annual Gazette and sponsors a variety of activities with Wolfean themes including a regular book discussion group and tours of locations mentioned in the corpus. The group has been holding its annual Black Orchid Banquet for more than thirty years. Congratulations to all the nominees.
Publish Post
Posted by Ayo Onatade at 08:25 No comments:

Orion are due to publish six more books by thriller writer James Rollins.
Posted by Ayo Onatade at 18:15 No comments:

On Saturday, 6 June, The Times will run an exclusive listing of several shortlists for this year's Annual CWA Dagger Awards, the most prestigious crime fiction prize in the world.
The Daggers acknowledge the best in crime writing (including fiction, non-fiction, thrillers, psychological and historical mysteries, first novels, short stories and authors whose work has won the approval of libraries and readers' groups). Not all of the shortlists are yet available, but short commentaries about the nominated books and authors will accompany the listings.
The Times will also run an essay by Barry Forshaw on the history and continuing importance of the Dagger awards.
Posted by Ayo Onatade at 11:59 No comments:

There is an interesting article on Martina Cole in the Observer. The article was done as a prelude to the showing of the dramatisation of Martina Cole's The Take which starts on 17 June on Sky 1.
Posted by Ayo Onatade at 10:29 1 comment:

More information can be found here. Please go and vote!
Posted by Ayo Onatade at 10:00 No comments: