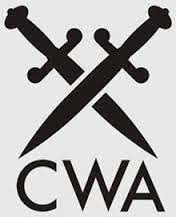 On Monday 30th June 2014 at a dinner held at York’s Place a number of the Crime Writer Association Dagger Awards were given out.  They are as follows – (* = Winner)

The CWA Debut Dagger:
The Long Oblivion by Tim Baker
A Convenient by Michael Baker
Under the Hanging Tree by Barb Ettridge
The Father by Tom Keenan
Motherland by Garry Abson
The Allegory of Art and Science by Graham Brack
Convict by Barb Ettridge
The Dog of Erbill by Peter Hayes
*The Movement by Jody Sabral
Burnt by Kristina Stanley
Deviant Acts by John J.White
Seeds of a Demon by Anastasia Tyler
Colours by Tim Emery

CWA’s shortlists of nominees for its Gold Dagger, Ian Fleming Steel Dagger, and John Creasey Dagger will be posted soon.

Congratulations to all the nominated authors and winners.
Posted by Ayo Onatade at 06:25