Belinda Bauer on Thursday 17 July 2014 at 9pm scooped the Theakstons Old Peculier Crime Novel of the Year Award for Rubbernecker.
Celebrating its tenth year, the Award is considered one of the most coveted crime writing prizes in the country.
The CWA 2010 Gold Dagger Award-winning author received glowing reviews for Rubbernecker featuring Patrick Fort, a medical student with Asperger’s Syndrome.
Belinda was presented the award by title sponsor Simon Theakston and broadcaster Mark Lawson at the opening night of the Theakstons Old Peculier Crime Writing Festival. The annual Festival, hosted in Harrogate, is the world’s biggest celebration of the genre.
She beat off stiff competition from the shortlist of six, whittled down from a longlist of 18 titles published by British and Irish authors over the last year.
Belinda said: “This is really unexpected; it feels like a very lucky accident to win this award when my fellow shortlisted authors seem so much smarter than me! I’m delighted. It’s a wonderful festival and such a prestigious prize. I’d like to thank the judges who read all the shortlisted books, and Simon Theakston for sponsoring the Festival. I’d particularly like to thank my publishers, Transworld, and my wonderful agent, Jane Gregory.”
The 2014 Award is run in partnership with T & R Theakston Ltd, WHSmith, and Radio Times. Belinda collected a £3,000 cash prize, as well as a handmade oak cask provided by Theakstons Old Peculier.
Simon Theakston, Executive Director of T&R Theakston, said:
“It was a very tough decision as it is every year as all the books on the shortlist were outstanding but I’m delighted to hand the trophy to Belinda.”
A special presentation was made to Lynda La Plante - the winner of the fifth Theakstons Old Peculier Outstanding Contribution to Crime Fiction Award.
Lynda said: “'I am delighted to be at the Festival this year and it is a great honour to be the recipient of such a prestigious award.  I've decided to dedicate my award to the late Verity Lambert, who had faith in me at the very start of my writing career when she commissioned Widows.  Also to the readers of my books and viewers of my television productions, they give me such enthusiastic and valuable feedback and without them I wouldn't have this wonderful career that I enjoy so much.”
La Plante joins Ruth Rendell, PD James, Colin Dexter and Reginald Hill as recipients of the Award.
The Liverpool author began her career as an actress before turning to scriptwriting.  La Plante has written over 170 hours of award winning television drama including Widows, Prime Suspect and Above Suspicion. She recently announced she has begun writing TENNSISON, based on her character Jane Tennison (played by Helen Mirren in Prime Suspect), which will follow the character from the age of 21 when she first joins the police force as a WPC.
La Plante’s new standalone novel, Twisted continues La Plante’s run of internationally acclaimed best sellers. 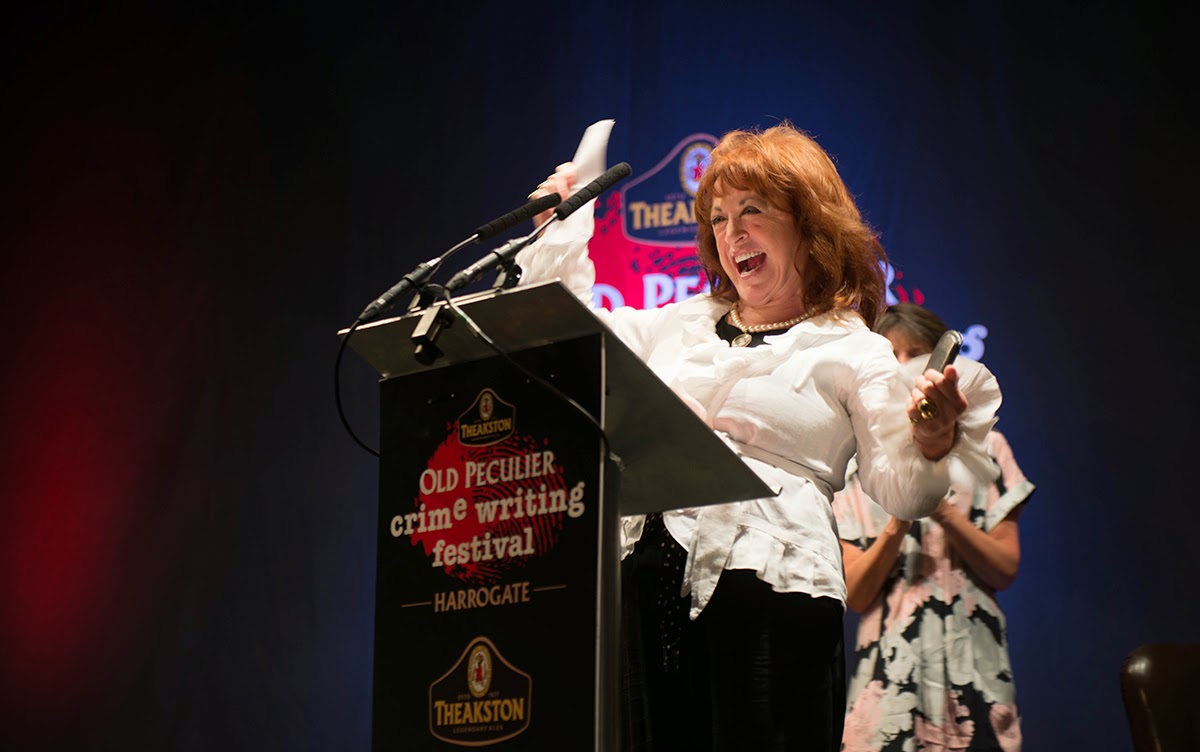 Simon Theakston added: “It’s also a great privilege to welcome Lynda La Plante to Harrogate to collect her Outstanding Contribution to Crime Fiction Award. This award acknowledges her huge contribution not only to crime fiction, but to British culture as a whole with her iconic television oeuvre.”
ENDS
For further information please contact Ann Chadwick at Cause UK 07534892715/ ann@causeuk.com
NOTES TO EDITORS
For more on Belinda visit: http://www.belindabauer.co.uk
Belinda Bauer – Rubbernecker
Patrick didn't care what made people work. He was only interested in what happened when they stopped. Life is strange for Patrick Fort - being a medical student with Asperger's Syndrome doesn't come without its challenges. And that's before he is faced with solving a possible murder. Because the body Patrick is examining in anatomy class is trying to tell him all kinds of things. And now he must stay out of danger long enough to unravel the mystery - while he dissects his own evidence...
1.      AWARD DATE
17th July: winner announced at Award ceremony on Opening Night of Theakstons Old Peculier Crime Writing Festival, Harrogate (8pm, Thu 17 July) at the Old Swan Hotel.
How the Awards are judged:
The winner was decided by a panel of Judges: Executive Director of T&R Theakston Ltd. and title sponsor Simon Theakston, Festival Chair and author, Steve Mosby, Radio Times’ TV Editor, Alison Graham, and Head of Fiction at WHSmith, Dave Swillman, as well as the public vote.
2.        THE FULL SHORTLIST 2014
Denise Mina -The Red Road
Malcolm Mackay - The Necessary Death of Lewis Winter
Peter May - The Chessmen
Belinda Bauer - Rubbernecker
Elly Griffiths - Dying Fall
Stav Sherez - Eleven Days
3.      PREVIOUS WINNERS
2005 – Lazy Bones by Mark Billingham
2006 – The Torment of Others by Val McDermid
2007 – Two Way Split by Allan Guthrie
2008 – The Tenderness of Wolves by Stef Penney
2009 – Death Message by Mark Billingham
2010 - A Simple Act of Violence by RJ Ellory
2011 – 61 Hours by Lee Child
2012 – The End of the Wasp Season by Denise Mina
2013 – Beasts and Gods, by Denise Mina
3.      ABOUT THE FESTIVAL
The Theakstons Old Peculier Crime Writing Festival is Europe’s largest event dedicated to the celebration of crime fiction. Taking place annually over four days each July (this year: 17-20 July), the Festival programmes over 80 best-selling UK and international crime authors and over 20 events. It is organised and promoted by the north of England’s leading arts festival organisation, Harrogate International Festivals. Ranked in the top three literary festivals in the UK by The Guardian, it is also featured in the Independent ‘50 Best Festivals’.
This first ever Festival was in 2003; the Awards are now in their tenth year.
4.      ABOUT THEAKSTONS
Title sponsor of the Festival since 2005, Theakstons Old Peculier ale is produced by T & R Theakston Ltd. It is one of the country’s most famous and highly regarded traditional ale brewers. Theakstons was established in Masham, North Yorkshire in 1827 by Robert Theakston. After a brief period in the 1980s when the company was acquired by Scottish & Newcastle plc, the company has been back under family ownership since autumn 2003.  It now operates as an independent brewer producing five permanent brands in the Theakstons range including the iconic Old Peculier – its best-known beer with a rich, dark flavour, celebrated by ale enthusiasts all over Britain and around the world. Theakstons Old Peculier is now available in the United States again thanks to an agreement between the brewer and Latis Imports of Connecticut.
none;">