Dan Smith on Superstitions and Beliefs 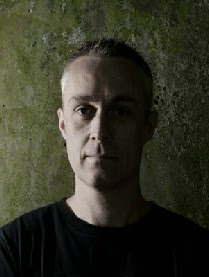 There were times when my brother and I would hire a boat to take us upriver. We’d tow a canoe, and when we reached a good, isolated spot, we’d disembark, unhitch the canoe and ask the boat owner to come back in a couple of days. We weren’t always sure that we’d see him again, which probably wouldn’t matter if we were close to a town, or had some form of communication. But this wasn’t any old river, this was the Araguaia – one of the major rivers of Brazil; more than two and a half thousand kilometres of murky, black water, and flooded forest filled with piranha, caiman, and river dolphins. We’d be in the middle of nowhere, an hours’ boat trip from the nearest civilisation which was little more than a small frontier town, eight hundred miles from the nearest city. Dangerous? Perhaps. Fun? Most definitely. 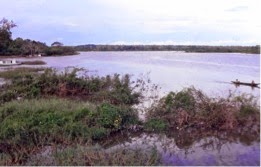 The first few times, we went with more experienced fishermen, but once we’d learned the basics, my brother and I would pack our gear and set out alone. The weird thing is that, despite being surrounded by endless danger, and despite being just a teenager, I never felt afraid. Or maybe it’s because I was just a teenager that I never felt afraid. I didn’t know any better.

Although most of the people were Catholic, there was a great deal of superstition, and countless stories about the forest and the creatures that lived within. Many of those stories came from the African influences as well as the indigenous Brazilian people, and found their way into everyday thinking. So when my brother and I set off alone upriver, the locals would warn us not just about head-hunters, but also about more unusual creatures like the river dolphins who took human form to lure people to their deaths, the lobisomem (that’s a werewolf to you and me), the mapinguari (a bulletproof carnivore), the saci perere, and the corpo seco (a corpse forced to wander the earth because he was so evil that the earth would not rot his flesh and the devil would not take his soul).

Needless to say, I never came across any of these creatures. For us, the most dangerous 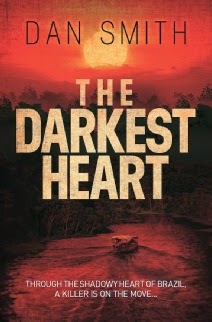 time was when the caiman slipped onto the beach by our tent at night, or when the river dolphins came close enough to tip the canoe. But those stories stayed with me, and they felt perfect for a river trip in The Darkest Heart, moving from the vast Araguaia to the narrow, forested waterways of the Rio das Mortes. Confined on a boat with an unpredictable killer, a dark intention, a terrible cargo and something precious to protect, why not make it feel even more dangerous? Why not add a little more darkness? After all, when the forest is so impenetrable and the night is so black, it’s not difficult to believe that something is out there among the trees.

Folklore and traditional stories are something of a theme running through several of my novels. As is the idea that in daylight it’s easy to dismiss superstitions, but there are circumstances when, no matter how pragmatic or cynical you might be, they become easy to believe. And who could be more pragmatic and cynical than a hardened soldier who has witnessed the worst that humanity has to offer? 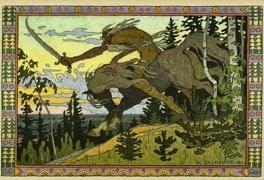 The fairy tale, or skazka, is a deep-seated part of Russian culture, so I chose to weave some of them through Red Winter, creating an atmosphere of unease. The main character recalls the tales he heard as a child about One-Eyed Likho, Rusalka, Baba Yaga, just as the characters in The Darkest Heart heard their traditional stories. But rather than just keep them lurking in the darkness, I let one character creep to the fore.

Koschei is a well-known figure who appears in more than one of the skazkas, a terrible, demonic figure who cannot be killed; a creature who steals the hero’s wife, forcing him to endure a series of arduous tasks in order to rescue his beloved. He is not usually described in detail in the stories, but pictures often show him as old and ugly, long-haired and vicious. So this monster slips into the story, and my main character is pitted against a brutal torturer and murderer who calls himself Koschei – a creature from children’s worst nightmares. And what could be more terrifying than giving chase to the monster from your childhood nightmares? Especially when it can’t be killed . . .