Shamus Award Winner Edward Wright's new crime book is called DAMNATION FALLS, in which a disgraced Chicago newspaper columnist agrees to ghost write a biography of his childhood friend and former Tennessee governor, but instead finds himself investigating a series of ghastly murders and a town legend from the Civil War in the Tennessee hills.

On Saturday 23rd June from 2pm Dean Koontz will be signing copies of ‘The Good Guy’ published by HarperCollins in hardback, priced £17.99 from his home in Newport Beach , California for customers at Waterstone’s Piccadilly, (203-206 Piccadilly, London W1V 9LE). The signing will start at 2pm GMT. 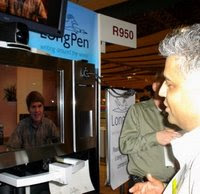 The LongPen TM – the world’s first long distance, pen-and-ink signing device is the invention of Margaret Atwood. Carbon neutral, and one of the most exciting developments in the literary world, it enables booklovers from around the world to have contact with authors they would never otherwise meet. LongPen TM operates over the Internet, incorporating video conferencing to facilitate trans-Atlantic conversations between writers and their fans.
Not only is this the commercial launch of LongPen TM to the UK public, but the first time that this hugely prolific writer has undertaken a signing event for UK fans: a genuinely groundbreaking moment. But we know that our man, Ali Karim had the benefit of being one of the first people at this year’s London Book Fair to use the LongPen, and had Koontz ‘sign’ his copy of The Good Guy.

The visual language of design - the ability to communicate what the book is about, who it is for - is something publishers are all too aware of, as they watch their books do battle on increasingly cluttered bookshop (and supermarket) shelves, competing for our attention and, let's face it, our money. Images and typography play as great a part in the mind of a potential book buyer than do endorsements on the jackets, be they blurbs from fellow writers, or a sticker from Richard and Judy.
Item in The Guardian

Bestselling author John Grisham will publish a new novel this autumn about an American football player in Italy, it was announced today. The book, entitled Playing for Pizza, will be published simultaneously by Doubleday in the US and Century in the UK.
Playing for Pizza is a short novel about a fallen American football star who can no longer get work in the National Football League and whose agent, as a last resort, signs a deal for him to play for the Parma Panthers, in Parma, Italy. The quarterback’s move to a small city in a foreign land leads to a series of cultural misadventures. The idea for the novel grew out of time Grisham spent in Italy researching his last novel, The Broker, which was set in Bologna.
“I was pleasantly surprised to find real American football in Italy,” says Grisham, “and as I dug deeper a novel came together. The research was tough – food, wine, opera, football, Italian culture – but someone had to do it.”
John Grisham is the author of 18 novels and the recent bestselling work of non fiction, The Innocent Man. Arrow will publish The Innocent Man in paperback on 15th November, Century will publish Grisham’s next legal thriller in spring 2008.
Playing for Pizza will be published as a Century hardback on September 25th with an Arrow paperback the following year.
Posted by Mike Stotter at 16:52