The Return of Norman Bates

“Robert Bloch would be delighted with Psycho: Sanitarium. Chet Williamson has captured the Bloch ambiance in a twisty-turny terror tale that will keep you turning pages into the wee hours.” F. Paul Wilson, creator of Repairman Jack and author of Panacea

Chet Williamson saw Alfred Hitchcock’s adaptation of Robert Bloch’s Psycho when he was twelve; it’s been seared in his memory ever since. The legendary Norman Bates returns as a main character for the first time in over 30 years in Psycho: Sanitarium, an intense psychological thriller of murder and deranged madness. 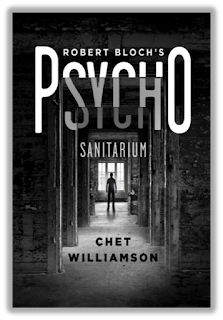 Psycho: Sanitarium by Chet Williamson
To be published on 12th April by Canelo, (£3.99 in eBook)

It’s 1960. Norman Bates is in the State Hospital for the Criminally Insane and it's up to Dr Felix Reed to bring him out of his catatonic state. Dr Reed must face both twisted patients and colleagues who think of the institution as a prison rather than a place of healing. The greatest obstacle is the building itself, once a private sanitarium, rumoured to be haunted.

A delicate peace is disturbed by the arrival of Robert Newman, Norman's twin brother taken away at birth after a doctor pronounced him brain damaged. As the brothers get to know each other, Norman senses a darkness in Robert, perhaps even deeper than that which has lurked in Norman himself...

“Fans of Robert Bloch rejoice! Chet Williamson's Psycho: Sanitarium brings a 21st Century sensibility and edge while remaining true to the classic pulp spirit; a fun, smart, nasty, throwback. You’ll want to read in a single sitting with the lights on. But as always, beware of Mother" Paul Tremblay author of A Head Full of Ghosts and Disappearance at Devil’s Rock

CHET WILLIAMSON is a successful horror and suspense author, with nearly 20 books and over 100 short stories published in Esquire, The New Yorker, Playboy, and many other magazines and anthologies. His many honours include the International Horror Guild Award and nominations for the World Fantasy Award, the MWA's Edgar Award, and six times for the HWA's Stoker Award. Chet lives in Pennsylvania, USA.
Posted by Ayo Onatade at 09:00