The Insider by Mari Hannah extract

I am pleased to host an extract from Mari Hannah's new book The Insider as part of the The Insider blog tour.

It was the news they had all been dreading, confirmation of a fourth victim. For DS Frankie Oliver, the journey to the crime scene brought back memories of her father driving her around Northumberland when she was a rookie cop, pointing out the places where he’d been called to investigate serious incidents throughout his own police career, giving her the benefit of his advice along the way. He’d been doing this since she was a kid, only with less detail, leaving out the unspeakable horrors the locations represented. Back then, they were words.  Just words. Narratives that, if she were being honest, excited her in ways they should not. And then there was the night he stopped talking: an experience etched on their collective memory forever more – a night too close to home.

Flashlight beams bobbed up and down, illuminating sheets of horizontal rain. The detectives stumbled along the Tyne Valley track, heading east on the Northern Rail line linking Carlisle to Newcastle. No light pollution here. Under a dark, forbidding sky, it was difficult terrain, rutted and sodden so close to the water’s edge. The swollen river thundered by, a course of water liable to flash flooding. Red alerts for the area were a regular occurrence. At midday, Northumberland’s monitoring stations had warned of a serious threat to those living nearby. If the Tyne rose quickly, Frankie knew they would be in trouble. Many a walker had slipped into the water here by accident.

Few had survived.  Lightning forked, exposing the beauty of the surrounding landscape. A high-voltage electric charge, followed by the rumble of thunder in the distance, an omen of more rain to come. The lead investigator, Detective Chief Inspector David Stone, was a blurred smudge a hundred metres in front of her, head bowed, shoulders hunched against the relentless downpour.

Mud sucked at Frankie’s feet as she fought to keep up, two steps forward, one back, as she tried to get a purchase on the slippery surface. Her right foot stuck fast, the momentum of her stride propelling her forward, minus a wellington boot. She fell, head first, hands and knees skidding as she tried to stay upright. Dragging herself up, she swore under her breath as brown sludge stuck to her clothing, weighing her down.

Unaware of her plight, David was making headway, sweeping his torch left and right in a wide arc close to Eels Wood. He had one agenda and Frankie wasn’t it. With a feeling of dread eating its way into her gut, she peered into the undergrowth blocking her passage. Where was a stick when you needed one? As she parted the brambles, there was an ear-splitting crack, a terrifying sound. Before she had time to react, a tree fell, crashing to earth with an excruciating thump, unearthed by a raging torrent of water filtering off higher ground, its roots unable to sustain the weight of a century of growth, landing metres in front of her.

Frankie blew out a breath. Only once before had she come closer to violent death.

Hoping her luck would hold, she vaulted the tree and ploughed on. From an investigative standpoint, the situation was grim. Had there been any footprints adjacent to the line, they were long gone. As crime scenes go, they would be fighting a losing battle to preserve evidence, assuming they ever found the body spotted by an eyewitness, a passenger on an eastbound train.

Where the fuck was it?

Frankie expected to see the dragon ahead, a wide-eye LED searchlight used by emergency services, an intense beam of white light guiding her. As far as the eye could see there was no light visible, other than the beam of David’s flashlight.

Worrying. Exasperating. Frankie couldn’t be arsed with this.  Pulling her radio from her pocket, she pressed the transmit button hoping her link to Control wouldn’t be affected by the appalling weather. It would be a heavy night in the control room, for sure.

‘Oliver to Control. We’re in position. Can you repeat the
coordinates? We’re seeing bugger all out here.’ Silence.

‘Damn it! DS Oliver to Control. Are you receiving?

A pause before her radio crackled to life: ‘Control: go ahead.’

Wiping rain from her nose with the back of her hand, Frankie repeated her request, yanking at the drawstring on the hood of her raincoat to stop water getting in. A useless exercise. She was well and truly drenched. ‘Have a word with first responders, will you? If they’re guarding a crime scene, they should know where the bloody hell they are. We need help here.’ 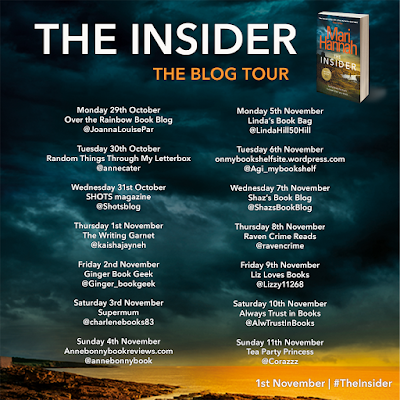 The Insider by Mari Hannah published by Orion Publishing
'It was the news they had all been dreading, confirmation of a fourth victim. 'When the body of a young woman is found by a Northumberland railway line, it's a baptism of fire for the Murder Investigation Team's newest detective duo: DCI David Stone and DS Frankie Oliver.  The case is tough by anyone's standards, but Stone is convinced that there's a leak in his team - someone is giving the killer a head start on the investigation. Until he finds out who, Stone can only trust his partner.