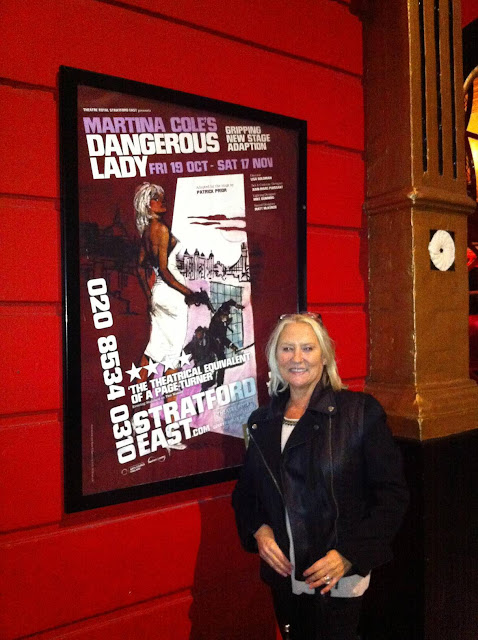 It was thanks to Film Producer / Director Barry Ryan [Free@LastTV] and bestselling crime author Martina Cole of Two Queens Productions that I found myself at Stratford East’s Theatre Royal last week. I had been invited to view Patrick Pryor’s adaption of Martina Cole’s debut novel, the 1992 London Gangster saga that is ‘Dangerous Lady’. This was a risky venture for the playwright and the team he assembled at the East End’s renowned theatre in , now highlighted on the map as the epicenter of London 2012’s Olympic and Para-Olympic venue[s]. The other issue the team had to overcome is the knowledge that Dangerous Lady, was the novel that 20 years ago transformed single mother Martina Cole into one of the ’s biggest selling crime writers. Cole is again riding high in the media’s zeitgeist with her 19th novel THE LIFE in the bestsellers, as well as her various TV adaptations and real-life crime shows she fronts on Sky TV.

The production of Dangerous Lady follows plot of Martina’s debut novel faithfully, but is [by necessity] a distillation of this dark cautionary tale. The theme is the allegiances and betrayal in a blue collar criminal family, set against the relationships between the corruption with the police and societies upper echelons. The process of paring down the narrative is done with the precision of surgeon’s scalpel as the play loses none of the novel’s grit, nor humor, an essential aspect of the narrative to keep this dark tale from tipping over the edge; because there is some real darkness below the surface of this tale of family moralities and the 1960’s London Underworld. It opens with the birth of Maura Ryan to Irish Matriarch Sarah Ryan. Maura, being Sarah’s only daughter to her sons Michael, Geoffrey and Anthony Ryan. When their father leaves Sarah and his brood penniless in post-war London; elder brother Michael Ryan takes it upon himself to provide for the family, but from the illegal black-market side of 1960’s London, building up a ruthless criminal network of vicious protection rackets, prostitution, strip-bars, drugs and petty [and not so] petty crime. 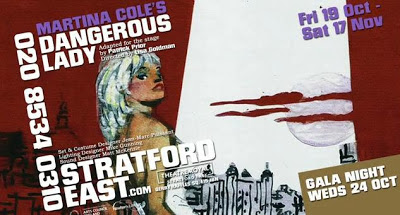 Matriarch and firm Irish Catholic, Sarah Ryan tries to get the church involved in trying to put Michael and the brothers back into the law-abiding side of the street, only to find the local priest is a conduit for the IRA [and with an agenda that Michael Ryan can help with]. As wonderful as the cast are, some playing multiple roles, the real star of the show is the stage and production. We have extraordinary lighting, smoke, rear projections of the club-land’s neon strip-lighting, and the plate glass friezes of church-windows and evocative music that just makes the proceedings flow like wine down a thirsty gullet. The two-tier, moving-tracked stage is marvelous to watch as it allows the play to flow through the audience like deadly vignettes, that cut through the density of the narrative, distilling it to the core, without losing the richness and depth of the novel. The first act, closes on the pivotal scene that marks Maura Ryan’s future, and illustrates the moral corruption that religion can cast over people when used to forward an agenda. This scene is as graphic as I've seen in the theater  and though truly horrific to watch, such is the intensity in which it is offered to the audience who see the proceedings right in their faces. One can never state that it is a gratuitous scene, nor one that is titillating, far from it. This scene is as hypnotic as it is essential for the narrative - as this last scene, before the intermission is the key that turns in Maura Ryan’s lock transforming her from a sweet, naive young girl into something more akin to a hybrid of Tony Montana [‘Scarface’] and Larsson’s troubled protagonist - Lisabeth Salander. 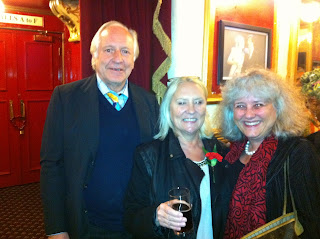 The second act relays the journey that Maura and her family traverse as she takes on the mantle of the family crime business, standing side by side with her older brother Michael Ryan. Naturally the shadow this casts over younger brothers Geoffrey and Anthony will have deadly consequences for Maura as well as her beloved Michael, as well as her relationship with her mother, the increasingly unhinged Sarah Ryan.

I did wonder how a theatrical production would tackle the tense bullion robbery that Cole placed at the centre of her novel; but I needn’t have fretted, as I was totally blown away by the way they managed to keep the audience on the edge of their seats. Loud staccato gunfire, light flashes and sirens tore through the theatre as the bullion raid was recreated to nerve-shredding effect. I found myself ducking for cover several times to ensure I was not hit by stray gun-fire that seemed to strafe the audience.

Then as the play reaches its climax, we see the consequences that Maura and the Ryan family face from the law, as well as the IRA, all due to the choices they have made, many of which they had little control over. There is a dark morality woven into the play, the self-same theme that the novel of Dangerous Lady carries as a striated motif – violence and evil often create their own violence and evil, cancelling out the original deeds in a form of equalization. Though there is much darkness in the proceedings, I was delighted to see some of the best and wittiest ‘one-liners’ from Martina’s debut make it onto the stage in . It is the suffusion of gallows humour, mainly via extraordinary dialogue that balances out, and makes the scary and visceral aspects bearable. The whole play zips by as fast as the gunfire that echoes in the auditorium. In fact the two acts of Dangerous Lady, move so fast, that one scarcely feels the movement of time, though the team from ’s Theatre Royal are well versed in the distillation of Cole’s thematic novels, having previously cut their teeth on previous works by this bestselling writer of “Two Women” and “The Graft”. 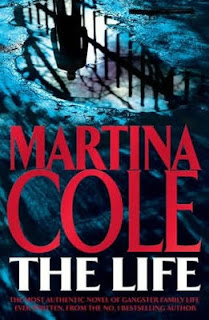 One aspect that is rarely mentioned about Martina Cole and her work, is how much compassion there is in her stories, something that is not lost in this theatrical adaptation; like her refusal to be judgmental about the myriad aspects that make up human nature. Though she rarely talks about it, I would like to point out that Cole supports many charities as well being a patron of the arts. It was over a decade ago that I discovered that she works with women in prison [especially the desperate mothers] from Africa and coerced into being ‘drug mules’ to support their families, now incarcerated in British Jails. Whenever I ask her about this, she always changes the subject and blushes. Personally I am amused and perplexed by the dichotomy in the response to Martina’s work, because she is second only to J K Rowling in terms of sales in the but receives very little literary acclaim for her work. Perhaps there is some snobbery at play here, so to see her work set against a theatrical back-drop is a form of vindication. When it comes to assessing the literary talent in the work of Martina Cole, her popularity is built upon by her own hard blue-collar work ethic, her skill as a storyteller and her generosity to those less privileged – with her ability to remain as grounded as she was when I first met her. She tells it like it is, a phrase that seems made for this gritty novelist who reveals the inner workings of the dark-side of the blue-collar world, a world that she understands and relays with an unflinching eye.

I was delighted to see her literary agent, the legendary Darley Anderson [who discovered Cole’s talent] as well as Jane Morpeth Managing Director of Headline Publishing in attendance, and together we all managed to have a drink with Martina, during the intermission. We raised our glasses and passed a toast to the versatile and prolific actor Herbert Lom who passed away recently, and reminisced at how a decade ago we managed to talk to him, and get a photo taken with him at one of the Crimescene London Film and Literature Festivals managed by Maxim Jakubowski and Adrian Wooten at The National Film Theatre. One thing I admire about Martina Cole is her unpretentious approach to crime writing, and how despite the fame and profile she has attained; she remains the same woman I met so many years ago. She also epitomizes an observation I have found in my many years of interviewing and reviewing the writers that make up the darkest edges of the genre. The darker the imagination, the more generous and amusing, as well as modest [and grounded] is the writer, in my experience. 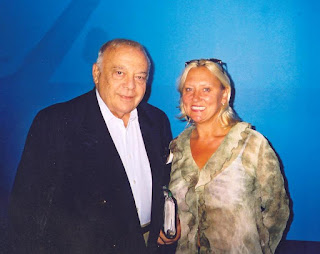 Dangerous Lady runs until Saturday 17th November, and we’d urge you to make time for a visit, because it is a spectacular production, and one that will make you ‘think’. If you’ve not read Martina Cole, then ‘The Life’ is a good place to start, as her work reveals what lurks beneath the veneer that we call ‘society’; one that we only glimpse when we walk away, often to the muffled echo of gunshots, or a scream from behind us. Cole writes about the world that many of us pretend does not exist, but one that lurks a few microns below our own reality.