The latest Top Notch Thrillers for October 2012 are the two books which shot Clive Egleton into ‘the Alistair Maclean bracket’ in 1973 and 1974.

A career British army officer retiring with the rank of Lt-Colonel thirty years after enlisting (underage) in the Royal Armoured Corps on D-Day in 1944, Clive Egleton (1927-2006) began writing thrillers whilst still a serving officer. SEVEN DAYS TO A KILLING was his fourth published novel and the film rights were snapped up on first publication by director Don Siegal fresh from his box-office hit Dirty Harry. With a cast including Michael Caine, Janet Suzman and Donald Pleasance,  the film version was renamed The Black Windmill after Siegal took the decision to shoot the climactic gunfight at the famous Claydon Windmills on the Sussex Downs.

The success of Seven Days and The  Black Windmill  allowed Egleton to retire from the army and become a full-time writer and his next novel, THE OCTOBER PLOT, became a huge international bestseller as a World War II thriller to rank alongside Where Eagles Dare and The Eagle Has Landed.

Known in America as The Bormann Brief, the book is a detailed description of an attempt to assassinate Hitler’s Deputy Martin Bormann in 1944, in the wake of the failed July Bomb Plot. 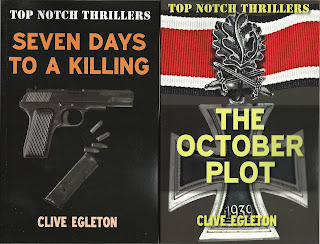 Clive Egleton went on to write more than forty novels. Seven Days To A Killing and The October Plot are the first of his titles to be reissued as Top Notch Thrillers, the print-on-demand and e-book imprint of Ostara Publishing which is dedicated to reviving Great British thrillers which do not deserve to be forgotten. In three years of operation, Top Notch Thrillers have published 28 titles, including novels by authors such as Geoffrey Household, Duncan Kyle, Francis Clifford and Victor Canning.
Full details of all titles can be found on www.ostarapublishing.co.uk.
Posted by Ayo Onatade at 06:54