The Cambridge Spies – 400 Years Back! 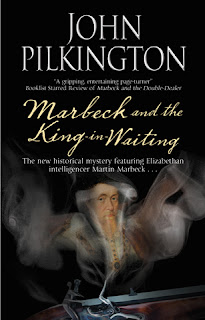 Today’s guest blog is by John Pilkington who writes historical novels for both adults and young readers. Marbeck & the King in Waiting is the second book in the series featuring Martin Marbeck, government spy, a man whose swordsmanship, cool courage, acting skills and ability to survive against the odds will be put to the test repeatedly in a turbulent era.


We think of the Cambridge Spies as a 20th century, Cold War phenomenon – Philby, Burgess, MacLean and the rest: malcontents persuaded by foreign powers to spy against their country. In similar fashion, bright young people were sometimes recruited at university by our own Intelligence Services. But it may surprise readers to know that the first Cambridge Spies were hired by the Secretary of State, Sir Francis Walsingham - in the 1580s.

Of course spies have always existed - the Romans had them. But in Britain the first truly effective - and state-funded - system was set up in Queen Elizabeth 1st’s reign, and continued under James 1st. Walsingham and his successor, Sir Robert Cecil, were shrewd, pragmatic men, ruthless in their methods and  bent on preserving the nation’s interests at all costs. At its peak the espionage service had over fifty agents and informers scattered across Europe as far away as the Levant. Then as now it was a dangerous, murky world of false identities, ciphers and codes, deception and betrayal.

The spies or ‘intelligencers’ were a mixed group. Some, particularly those from the universities, were educated men with a taste for excitement. The most famous was the Cambridge scholar and playwright Christopher Marlowe, recruited in 1587. (In fact Marlowe was absent from his studies so often that the university were going to refuse him his degree, until the Privy Council wrote to tell them he had been serving the state in secret and should not be penalised). Other spies were misfits or adventurers, while some were undoubtedly ‘the dregs of society’, who would inform on anyone for a price. Such men might be placed in prisons to befriend fellow inmates – particularly Catholics – and worm information out of them. Others posed as anything from merchants to private tutors. A few, like Marlowe, were linked to the theatre: acting skills have always been useful for espionage. Some of them, perhaps, would have enjoyed the sort of role-playing and double-dealing they might be obliged to undertake.

This is the world of my Crown Intelligencer, another ex-Cambridge man: Martin Marbeck. Marbeck operates in a twilight world of danger, mistrust and suspicion. His world, more often than not, is one of dark city streets, government chambers and prisons, the grand houses of the wealthy and powerful. He moves fast and among all classes, but forms few attachments; the only one who commands complete loyalty from him is his spymaster, the clever little hunchback Sir Robert Cecil.

We first encountered Marbeck in 1600, as a century dawned in which England was at war on two fronts (with Spain, and in Ireland). The spies of that era may have lacked our everyday resources like smart-phones and the Web, news only travelling as fast as a horse (or sailing ship) could carry it. But every man carried a weapon, and state officials could apply for a Torture Warrant to extract information; there was no need to resort to Extraordinary Rendition. Such practices, far from being limitations, create possibilities for an author of historical mysteries.

More information about John Pilkington and his books can be found on his website.