Diary of a diabolical book launch
My wife Caroline looked horrified. "Tell me you're not going to do the fiery nipple tassels, are you?"

I love a show. Don’t you? A song, a few laughs, a story. I also love book readings, panels and launches: pearls of wisdom tossed before us bedazzled readers. As I’d spent the weekend performing at Lounge on the Farm and enjoying the twisted darkness of the Boom Bang Circus cabaret, I wanted more than your average book launch. When I told my wife I was going to try something a bit different, she feared I might try to recreate some of the wilder Boom-Bang moments with tassels, hoola-hoops and lingerie.

Fun for all the family
Instead, I co-opted the talented Noel LeBon, troubadour and actor, to help me launch my Victorian crime novel, Lawless and the Devil of Euston Square, with a show:

Music, Murder, Metropolitan at Waterstone’s extraordinary Gower Street shop.
When a normal employer sees my CV, I blush at the gaps in my employment history: Withnail & I North London wilderness years; run away to Brazil; difficult second novel.

When my publicist looks at my CV, she loves the nonsensical lacunae: Brazil cricket team; longest play in world; tutoring Sugababes.

I squandered much of my youth hanging around with out-of-work actors. Rehearsing clowning skills chez Ecole Philippe Gaulier, I learned how the audience enjoy the actor’s pleasure: it is the only theory I know that explains Connery, Caine, Burton and Cary Grant.

I survived Ken Campbell’s theatrical epic, The Warp by Neil Oram. From Ken I learned that audiences love things that start, change and then come back again, so we can all pat ourselves on the back and say, “Oh, I get it now.”

From Peter Brook I learned that holy theatre quickly turns to deadly theatre, and that rough magic can be conjured out of nothing with good will.

Surviving the book launch
We novelists pour into our books all the love and hate, fun and frenzy, passion politicking that we can. But in performing, it is tough for us to be as entertaining as our books. Which is a shame. We are probably fascinating if you catch us at our ease, in the pub, or at a festival. 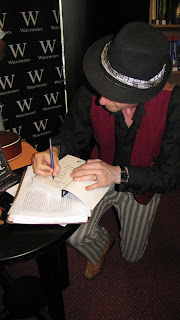 The pressure to perform, to impress, to sound erudite and informed can stultify the magic of the writing. After all, erudition and information are not the primary reasons for reading. They are bonuses. But what is thrilling is to be entertained and only later realise how much substance you have absorbed.

That is why I was over the moon to discover the ReAuthoring Project, with whom I have performed in restaurants, ships, fields and tents. Here’s a bit of their manifesto:
A Lawless Launch
Arriving at Gower Street, we found a sign: The Law section will be closed from 6 o’clock. Which meant that, for our launch, it would be a Lawless bookshop.

Noel and I presented a cabaret version of the play. It started with subterranean protest songs, in the spirit of the book (if not the era). The larksome japery went on with a character parade. I particularly enjoyed being Mrs Marx:

“Karl makes it so difficult for himself writing the way he does. If only he could write a bestseller like Mr. Dickens. I feel sure he could.”

While Noel’s urchin Worm made people look up from their Pimm’s and Garibaldi biscuits:

We sang London songs by the Pogues and the Smiths and rebellion songs by Eddie Vedder and Jamie West. The highest praise came from @oldmapman: “Heck of a way to launch a book!”

With this recipe for revolution, I fell in love with subterranean London. I already loved Willkie Collins and his “mysteries that lie at our own doors”. I learned that it’s no accident that evolution, crime fiction, criminology and psychology began simultaneously.

I had to become an 1860s expert, yes, but setting a techno-thriller in the past has advantages. I could be blunt about terrorism. Is there never a justification for revolutionary action? Not even in a society that’s crazily unjust?

Using all the voices I had just tried out recording the Audio book, I had a lark. There were ridiculous moments, but I think they helped convey the book’s serious side too. And next time, maybe I’ll try Boom Bang circus style tassels.

nice post here
i love your style of blogging Ayo :)
there are 2 blogs that i've found so far to be very helpful and have something interesting for me whenever i visit, this one and http://danieluyi.com
Keep it up. I will be visiting again.

Whilst I appreciate the kind comment I really do have to point out that it is totally inappropriate for you to post a link to your own blog (which is not crime fiction related) on my blog as part of your comments. Trying to cover it up by saying that you have found 2 blogs that have been most helpful and one of them being your own blog is not very clever. It is even worse since your blog has nothing to do in the slightest with crime fiction. If your blog was crime fiction related then it would not be so bad. Whilst you are welcome to post comments in response to what I have been blogging about I would appreciate it if you do not use this blog to promote your own blog without permission.