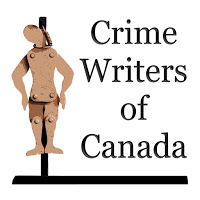 Best Short Story:
A Death at the Parsonage by Susan Daly in The Whole She-Bang 3, (Toronto Sisters in Crime)


The Golkonda Project  by S.J. Jennings,

The Derrick Murdoch Award is a special achievement award for contributions to the crime genre. This year's recipient is Christina Jennings, founder, Chairman and CEO of Shaftesbury Films. She has won a number of awards, including Genies, Geminis and Canadian Screen Awards, among several other nominations and accolades throughout her career. Christina founded Shaftesbury Films in 1987 as a feature film company. She has produced movies and television series based upon the work of several Arthur Ellis Award-winning Canadian crime writers including the late novelist and playwright Timothy Findlay (External Affairs), novelists Gail Bowen (the Joanna Kilbourn TV movies) and Maureen Jennings (Murdoch Mysteries), as well as historian Marjorie Freeman Campbell (Torso).
Posted by Ayo Onatade at 14:48