The Curious Murder of Felix Francis by Anthony Horowitz 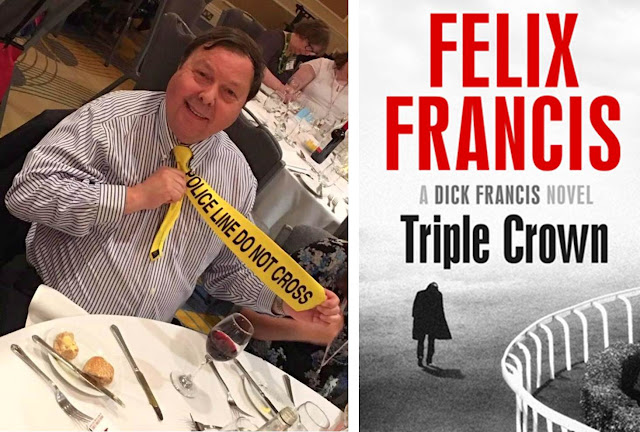 The five minute after-dinner speech by Anthony Horowitz that closed the 2017 Crimefest Gala Awards Dinner was remarkable.
I call the speech remarkable because Horowitz wrote this most amusing British Golden Age Murder Mystery while dinning, during the Gala Dinner.
I recorded it, and after dinner I spoke with Anthony Horowitz who gave me permission to share it with my FB friends before I use it in a planned feature at Shots.
Horowitz and I share a link to London's Ian Fleming Publications Ltd. Horowitz penned TRIGGER MORTIS the last James Bond novel for them; while I am one of Judges on the CWA Steel Dagger.
Horowitz explained to me that he had been told by Adrian Muller and Myles Alfrey of Crimefest to keep the speech to a maximum of five minutes. Crime writers require the bar and any more than five minutes could result in a stampede, for Gin.
Horowitz continued 'I had a speech planned, but Felix Francis' tie triggered some thoughts and as we all chatted over dinner, a sort of story came to me.'
I checked with Felix that he was OK with me releasing it, as Anthony Horowitz had enthusiastically agreed for me to release it. Felix Francis apart from being a great (and underrated) writer is a top bloke and he chuckled that I'd release it.
It is quintessentially English, with the 'Murder' as a puzzle, and jolly funny.
And remember Anthony Horowitz will be a Guest of Honour at Bouchercon, The World Crime and Mystery Convention hosted in Dallas TX [2019]
Pour a glass of Gin and enjoy 'The Curious Murder of Felix Francis' by Anthony Horowitz as performed at Crimefest Bristol 2017