How To Get Away With Murder…... 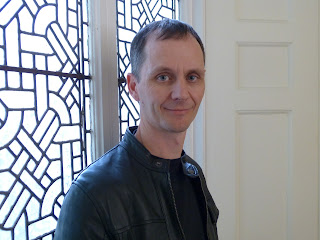 One of the really cool things about being a writer is that you have an almost unlimited license to unleash your inner psychopath. There’s something intensely satisfying about sitting down at the keyboard and coming up with an interesting way to send a character on their way to the hereafter. Of course, there’s the added bonus that you’re not going to find yourself doing a twenty-year stretch for your troubles.

The Quiet Man was a lot of fun to write. The basic idea was simple: what if a killer used his victims’ husbands as a murder weapon? That “what if” turned into a scenario where the killer tied the wives to a kitchen chair, then attached a bomb to their chest that would be triggered when the husband opened the door.

That’s where the real fun began.

To start with, how do you restrain your victim? Rope is one solution, but that can get fiddly. You need to tie knots, and your victim might not be as cooperative as you’d like; it’s a recipe for disaster. No, duct tape is much more practical, and efficient. Just tear off a strip and slap it on. It’s great for gagging your victim, too … unless, of course, you want them to make a noise.

Okay, now you’ve secured your victim, how are you going to blow them up? Stealing explosives from a mine is one option … but that’s going to be risky. Building a fertiliser bomb is out as well … buying large quantities of ammonium nitrate is a sure way to get the police knocking on your door. Because, the thing is, you don’t want to get caught, which means that you don’t want to draw attention.

And then you see a Fire Brigade YouTube video highlighting the dangers of using fireworks. In order to leave the viewer with a lasting visual impression they strap a firework to a dummy then blow it up. It’s perfect, a heaven-sent moment of serendipity. Is anybody going to give you a second look if you walk into a store and buy a box of fireworks? No, they are not.

Next you need to work out a way to make the bomb go bang. Stealing detonators from a mine is out for the reasons outlined above. Thankfully, there’s a much simpler solution, one that involves a nine volt battery, a box of matches and a Christmas tree light-bulb. And the beauty with this solution is that all of these items are easy to get hold of.

Finally, you need to engineer a way for the husband to trigger the bomb. The simple solution: rig a reed switch to the door. These are used in alarm systems. The burglar opens a door or window, the reed switch and the alarm goes off. In this case, the door opens, the circuit closes and the bomb goes boom.

My wife still tells the story of the time I met her on the stairs. I ever-so-gently placed my hands on her face and tilted her head to the side. Then I slid my finger across her carotid artery like it was knife. She was expecting a tender moment; I just wanted to check my angles and verify whether or not I could actually see a pulse. Like I said earlier, writers have an almost unlimited license to unleash our inner psychopaths.

The key words there is ‘almost’. You have been warned.