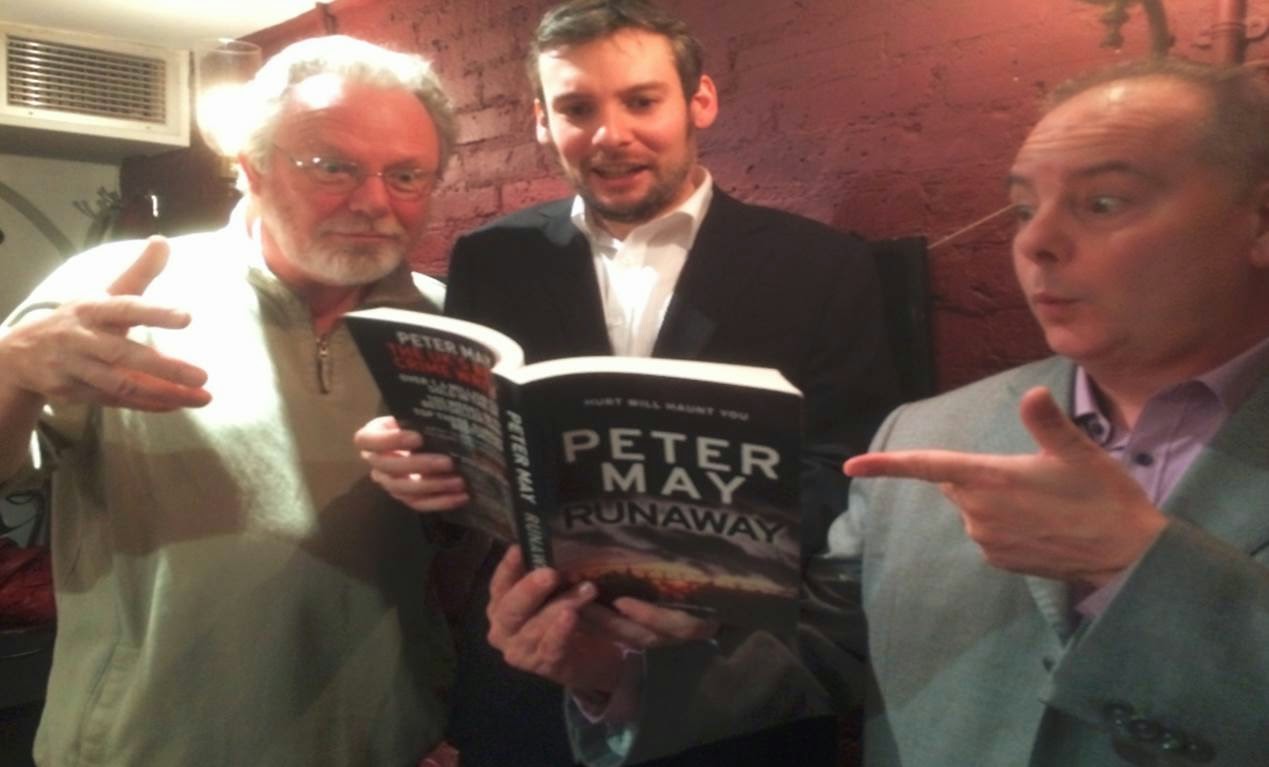 The Telegraph's Crime-Fiction Critic Jake Kerridge and Shots Editor Mike Stotter with Peter May in London
So as we recently surveyed what Quercus Publishing have in store for 2015, the first one off the block is Peter May’s latest thriller, Runaway. Unlike last year’s Award Winning ENTRY ISLAND – this is a deeply personal tale, and fictionalized by May - exploring this writer’s fascination with the 1960’s London Music scene, and an echo to the future, which again proves the past is never ever forgotten.
Glasgow, 1965 Jack Mackay dares not imagine a life of predictability and routine.  The headstrong seventeen year old has one thing on his mind – London – and successfully convinces his four friends, and fellow band mates, to join him in abandoning their lives to pursue their goal of musical stardom. 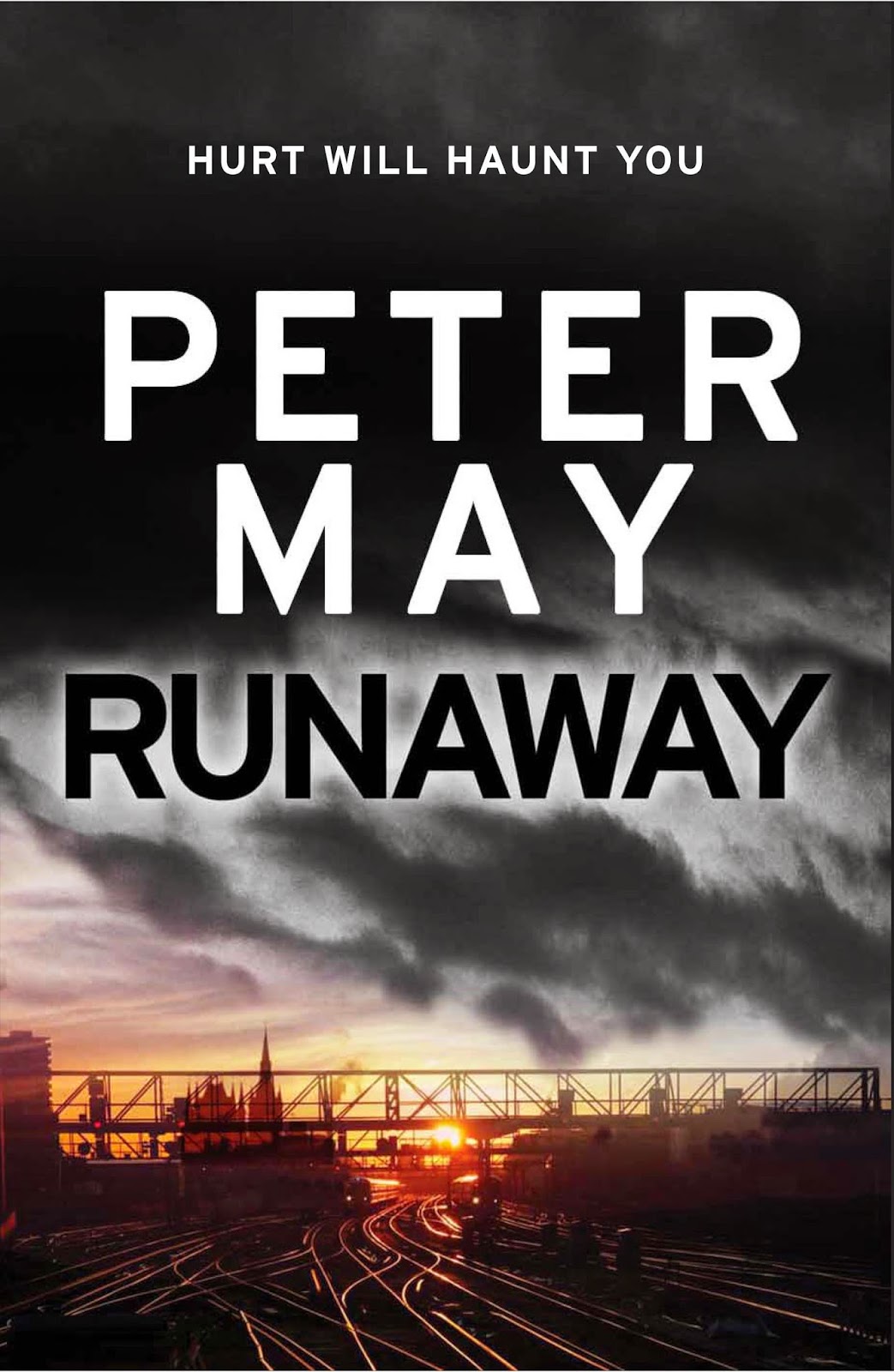 Glasgow, 2015.  Jack MacKay dares not look back on a life of failure and mediocrity.  The heavy-hearted sixty-seven year old is haunted by the cruel fate that befell him and his friends some fifty years before, and how he did and did not act when it mattered most – a memory he has run from all his adult life.  London, 2015 A man lies dead in a bedsit.  His killer looks on, remorseless.
What started with five teenagers five decades before will now be finished.  Runaway is by Peter May and is a tense nostalgic crime thriller spanning a half-century of friendships solidified and severed, passions ignited and extinguished; and set against the background of two unique and contrasting cities at two unique and contrasting periods of recent history.  Runaway is due to be published in January 2015.
So as Runaway is based upon an early incident in the author’s career, Peter kindly provided Shots readers, a few photographs to provide the narrative some context. 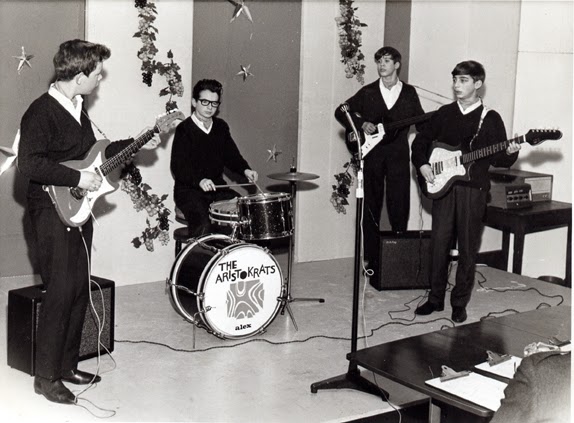 This was our first group, "The Aristokrats".  I think we were about thirteen here, and taking part in a Lewis's/Glasgow Evening Times talent contest in which we came in third.  I'm on the left, Stephen on the right.  All of us in this pic, except for the drummer, were the idiots who ran off to London.  The bass player was Ian Looker, who now lives in Bristol. 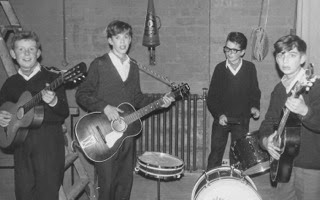 We were eleven or twelve here.  Backstage before playing at a school concert.

The two of us pioneering short haircuts, taken in the art department, probably in 5th year.  We'd both had long hair, and I can remember the collective intake of breath at school assembly the morning we turned up with our heads cropped! This was taken when the original band got together for a reunion concert in France in 2002.  We were pioneering even shorter haircuts then! To read more about Peter’s adventures in London click here
So after lunch with some of London’s literary critics, we retreated to a quiet bar so I could discover a little about what we have in store with RUNAWAY -
Ali          So after being awarded a Dagger earlier this year for ENTRY ISLAND, what’s the year been like for Peter May?


Peter      2014 has been an extraordinary year for me.  Entry Island was a Top 3 bestseller in the UK, Top 2 in France, and the first three Enzo books, published in paperback for the first time in the UK, have sold phenomenally well, the latest getting into the Top 20.  The first two books of the trilogy have now been published in the US and are also selling well.  I came back from a US tour in September to learn that Entry Island had won the Deanson’s Scottish Crime Novel of the Year, before going on to win the Best Read Dagger at the Specsavers Crime and Thriller Awards.  I also toured in France, the UK and Central Europe, and managed to chalk up 35 flights!  And as if that wasn’t enough I also wrote another book - “Runaway”.  So now, not unnaturally, I’m exhausted! 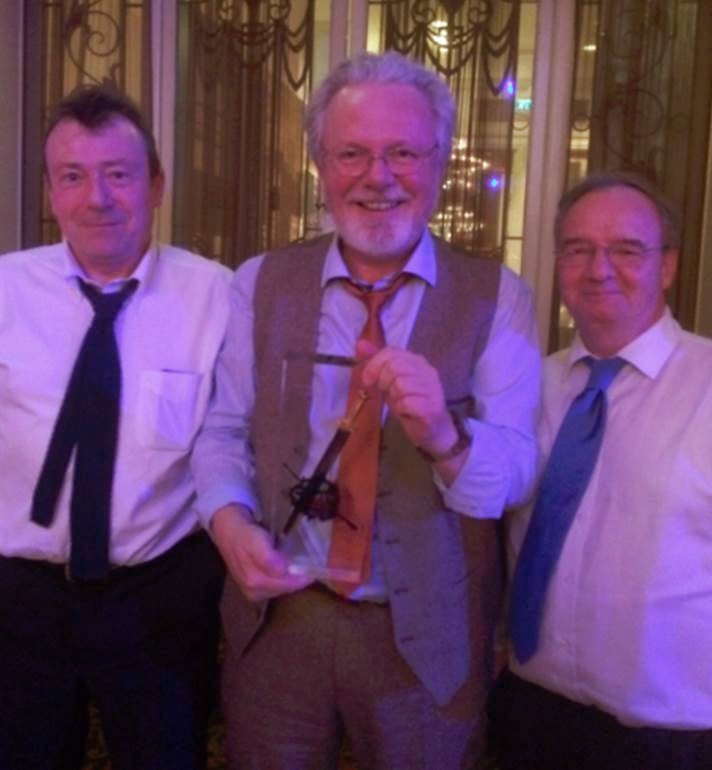 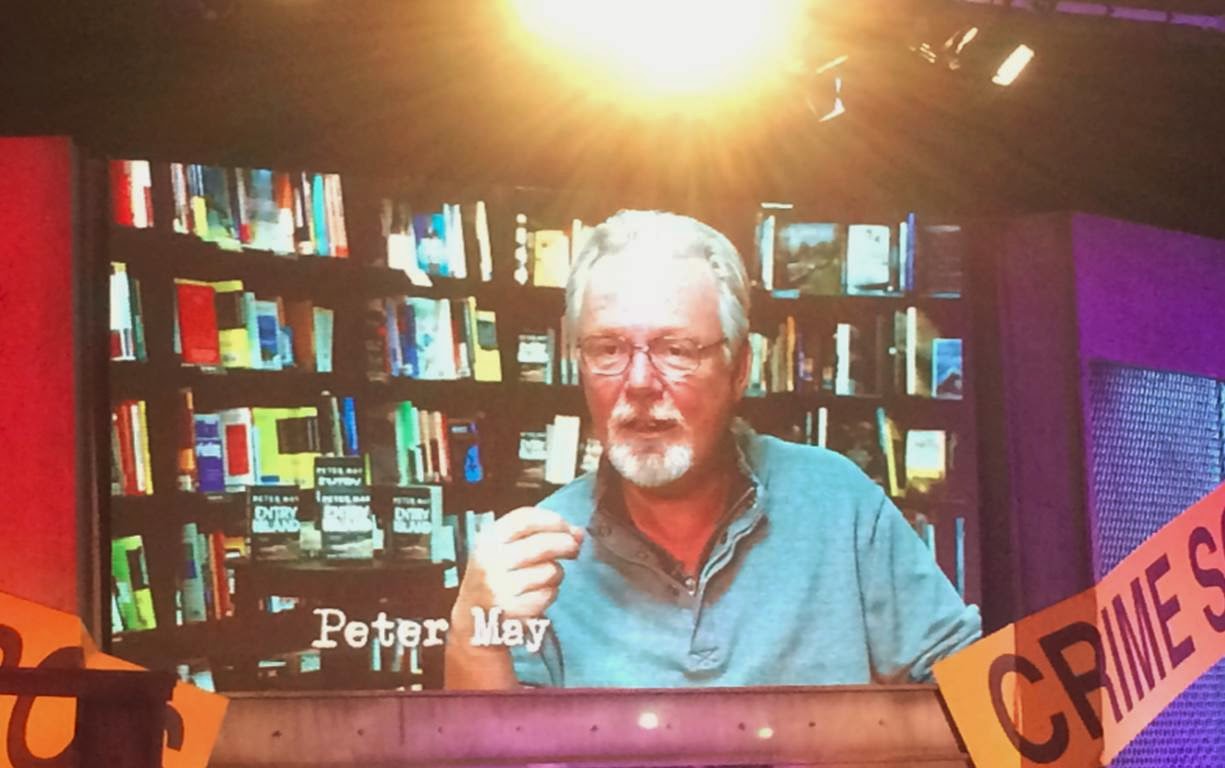 Peter      It’s true that the past-present coaxial is a theme I have returned to often in my recent work, I think largely because it is such a universal experience - the way those things we have done in the past, and the choices we have made, so shape our present and future.  It is possibly also the process of growing older that has made me more aware of that relationship between past and present.  But we are all affected by it, and regret is such a common human experience, that there is hardly anybody who can’t identify with that particular emotion - often in a very bittersweet way.
Ali          So with Runaway launching in January, can you let us now if you are planning a tour, like the extensive one for Entry Island, and where will details be posted?
Peter      Yes, I am planning a major two-week tour of the UK in the second half of January, taking in events in London and Scotland, along with radio and press interviews up and down the country.  Details will be posted on my Facebook author page - https://www.facebook.com/petermayauthor - as well as on Twitter and various print magazines and blog sites, and of course the website of my publisher, Quercus.
Ali           As an expat-Scotsman living in France, can you tell how you felt about the recent Scottish Independence referendum, and where did your allegiance lie?
Peter      I followed the referendum debate very closely, mainly through social media and the internet.  I gave several interviews on the subject to the French press, as well as participating in a coast-to-coast political radio show in the US, dedicated to the subject.  I was very much in favour of independence, not in any kind of anti-English sense, but from the perspective of creating a political structure that truly reflected the views of the voters - which the present set-up patently fails to do for most Scots.  Although I also believe the same can be said for many regions of England, and I am very much in favour of a federal solution to a political problem that is denying democracy and creating apathy in the population for the whole political process.
Ali          You have always been big into social media / internet – so how important is online visibility in these tough days for publishing?
Peter      I think a strong internet presence is crucial for writers and the future of publishing.  Mediums like Twitter have become the new “word of mouth”, which has always been the best way of selling books.  It’s something that happens more or less spontaneously, and is very hard to manipulate or predict.  But you have to be part of it to benefit from it.
Ali           But how do you manage your time, as you need to write as well?
Peter      Managing your time as a writer these days is very difficult.  The demands of promotion are huge, and I find that anything up to two-thirds of my year is now taken up with that pursuit.  So it’s very important to set writing time aside and simply shut the door on the world while you’re doing it.
Ali          So I assume you have little time for freelance Journalism then? Do you miss your days as a journalist?
Peter      I don’t miss those days at all.  I had an absolute ball as a journalist during the seventies, which was an exciting time of huge change and transition in Britain.  It was exhilarating and educational, but in the final event it wasn’t really what I wanted to do.  And since then I have been very lucky in being able to pursue my career as a fiction writer, both in television and in books.
Ali           And what have you read recently that has fired your imagination?
Peter      The best book I read in 2014 was William Kent Krueger’s “Ordinary Grace”.  I’ve always admired his writing, but this book was a great novel, as well as a crime book that took the genre to a new level.
Ali           And what’s next for Peter May?
Peter      2015 looks like being another very busy year.  It will kick off with my launch tour of “Runaway”, followed by a research trip to the Hebrides, after which I will be locking the doors on the world to write my new novel - and, yes, it’s a return to the Hebrides, though not to the characters of the Lewis Trilogy.  I will have another US tour in the autumn, after which I will be writing the final book in the Enzo Files.


Ali         Thank you for your time
Thanks to Quercus Publishing we have one limited edition proof copy of RUNAWAY
[limited to 300 copies] signed by Peter May to give away in an exclusive competition. 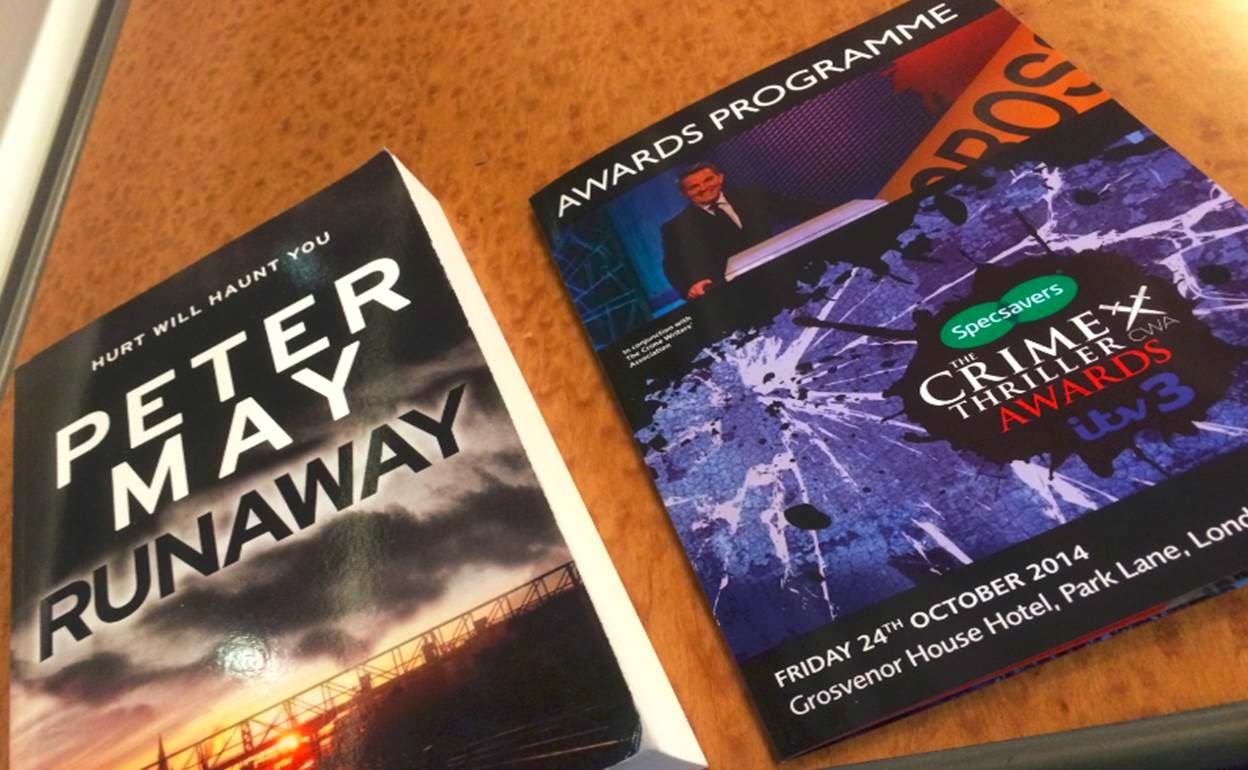 
Send your answer in an email to shotscomp@yahoo.co.uk marking the subject line “PETER MAY RUNAWAY” and please include a postal address.
Closing date for entries is Sunday 11th January 2015

Terms and conditions for the Peter May Runaway Competition

Closing date for entries is Sunday 11th January 201512:00:00 AM
All correct entries will be entered into a prize draw and the first correct answer picked at random on 11 / 1 / 2015 will be declared the winner of the book.
The winner will be notified by email within 14 days of the promotion closing date and is required to accept their prize by email or phone call within 14 days of notification.
In the event of non-acceptance within the specified period, the promoter reserves the right to reallocate the prize to the next randomly drawn correct and valid entry.
The winner will be notified within 28 days of the closing date. No responsibility can be accepted for lost or misplaced entries
The prize is non-transferable and there is no cash alternative
Only one entry per person
Incorrect or illegible answers or entries received after the entry date will not be entered into the prize draw
The judges decision is final and no correspondence will be entered into
Unfortunately geographical restrictions apply, with entries only accepted from the UK and Southern Ireland

Photographs © Peter May © Quercus Publishing and © Ali Karim
Posted by Ali Karim at 12:49

Great post! I love the premise of this novel, and I haven't read anything by this author yet. I'm adding it to my list as we speak. :-)