Budapest, my muse. By Adam LeBor

Some writers have a spirit that takes them, firing up their creativity, triggering a torrent of words. Others have a person as a muse, someone physically present or mentally imagined, to inspire them. I have a city. 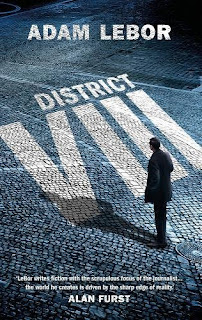 I first visited Budapest in the winter of 1990. Hungary, like its neighbours, was transitioning between Communism and capitalism. The political system was changing but the city remained largely untouched. Its grand Austro-Hungarian apartment buildings were shabby and dilapidated, pockmarked by bullet holes and shrapnel scars, the streets and boulevards crowded with Trabants, their engines rattling as they puffed out clouds of exhaust.

Budapest in 2017 is a modern European capital. The buildings have been renovated, the bullet-holes filled in. The downtown streets and squares are jammed with tourists from around the world. There are no more Trabants. But while a city can have a physical makeover, its history can never be erased.

No matter how lovely the architecture, Budapest is haunted by the ghosts of Nazism and Communism. The number two tram ride is surely one of Europe’s most scenic public transport routes. It snakes along the riverfront on the Pest side of the city giving a lovely view of the Danube. After a few hundred yards it passes a row of black metal shoes by the edge of the riverbank. The memorial marks the spot where Jews were lined up in the winter of 1944 before being shot into the river by Hungarian Nazis. Yet not all the ghosts are morbid: the city still holds the spirit of its golden age, at the start of the 20th century when the Hungarian capital was host to an explosion of creative talent. Writers, poets, artists and architects all found inspiration here.

All this makes a rich backdrop for fiction. My first novel, The Budapest Protocol, opens in the Astoria Hotel in the winter of 1944 as the Russian army advances, then jumps to the present day. The protagonist, a foreign correspondent called Alex Farkas, goes to visit his grandfather, Miklos, but discovers he has been murdered. Is Miklos’s death connected to a dark secret he learned that terrible winter? Alex starts investigating and begins to unearth a sinister conspiracy that reaches back to the dying days of the Second World War and a Nazi plan to ensure German economic domination of post-war Europe.

District VIII, the first volume of my Budapest new crime noir series, goes even deeper, to parts of the city that tourists and visitors never see. District VIII is home to Budapest’s largest Gypsy quarter – including the family of Balthazar Kovacs, a detective in the murder squad. District VIII is one of the city’s largest and most interesting – its western edge, which reaches downtown almost to the Danube, is now called the Palace Quarter, for its grand nineteenth century aristocratic villas that are now being restored.

But walk away from the river, into the narrow back streets and alleys and you will find a world of deep poverty, crime and prostitution. In my book much of the prostitution is controlled by Gaspar Kovacs – Balthazar’s brother. When a Syrian refugee is murdered during the migrant crisis of 2015, and the leads point to a connection with Gaspar, Balthazar has to decide where his loyalties lie: to the law or to his family. Through it all, Budapest too is a character, sometimes moving the story along, but always framing it:

Balthazar stepped out of his apartment building. The warm, humid air was heavy with the summer smell of the city: car exhaust, cigarette smoke, the greenery of the park on Klauzal Square. A familiar soundtrack too: a tram trundling by twenty yards away on the Grand Boulevard, raised voices from the faux-Irish pub on the corner across the street, a stream of abuse involving farmyard animals conjoined with various relatives – nobody swore like Hungarians – and a long burst of laughter. Two young women, one blonde, the other brunette, in close-fitting tops and short shorts teetered towards him on high heels, on their way to one of the many nearby rom-kerts, ruin pubs.

Like all the best muses, Budapest can be obstinate, capricious, even volatile. But she’s always there.

District VIII by Adam LeBor (published by Head of Zeus)
Life's tough for a Gypsy cop in Budapest. The cops don't trust you because you're a Gypsy. Your fellow Gypsies, even your own family, shun you because you're a cop.  The dead, however, don't care. So when Balthazar Kovacs, a detective in the city's murder squad, gets a mysterious message on his phone from a blocked number, he gulps down the rest of his morning coffee, grabs his police ID and goes to work. The message has two parts: a photograph and an address. The photograph shows a man lying on his back with his eyes open, half-covered by a blue plastic sheet. The address is 26, Republic Square, the former Communist Party headquarters and once the most feared building in the country. But when Kovacs arrives at Republic Square, the body has gone...  Kovacs' investigation will take him deep into Budapest's shadows, an underworld visitors never get to see: the gritty back alleys of District VIII; the people smuggling networks around Keleti Station; the endemic corruption of a country still haunted by the ghosts of history. And when the leads point to the involvement of his brother Gaspar, the city's most powerful pimp, Kovacs will be forced to choose between the law and family loyalty.
Posted by Ayo Onatade at 06:00