Mental illness often features in crime fiction but, to my mind, it’s not usually portrayed accurately. Some books have a madman at the heart of them but their thoughts and actions are rarely consistent with the realities of mental illness. Other books have mental illness tacked on, almost as a quirk, to make a character stand out. As often as not, these affectations come and go according to the requirements of the plot. 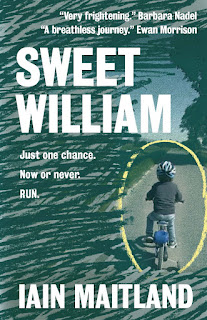 That’s not to say that some books, widening out into other genres, have not captured mental illness well over a sustained period of time. (Generally, someone does not ‘go mad’ overnight or, vice versa, suddenly become ‘normal’ - whatever ‘normal’ might be).  Wide Sargasso Sea by Jean Rhys and One Flew Over the Cuckoo's Nest by Ken Kesey come to mind as books that show the truth of mental illness and/or psychiatric disorders over time.

With my novel, Sweet William from Saraband Books, I wanted to put mental illness at the heart of the story. It’s often said that one in four people experience mental illness every year and that we all know someone who has mental health issues, even if those that pose a direct threat to others are relatively rare.  It’s all around us and in all of our lives.

It’s certainly true for me. My eldest son Michael suffered from anxiety and depression to the point where he was hospitalised and spent five months in the Priory. He’s managing his mental health well these days and we’ve written two memoirs about our experiences and we’re ambassadors for the teen mental health charity, Stem 4.

We talk regularly to people with mental health issues. These are complex and difficult matters and are widely misunderstood by the general public. Those with mental ill-health are often labelled in many derogatory ways by others – ‘self-obsessed’, ‘vain’, even as ‘con-artists’. These views reflect most on the ignorance of those holding them.

With Sweet William, the narrator, Raymond Orrey, is in a psychiatric unit, separated from his beloved, three-year old son, William. He sees himself as a decent human being and a wonderful father who loves his son more than anything else in the world. If only he can break out, find his son and run away to the South of France with him they can live together happily ever after.

The reality is that Orrey is a flawed and damaged human being with mental health issues. It is because of these issues – anger, the refusal to take medication and so on – that the story unfolds in the shocking way that it does.

Sweet William is a roller-coaster ride seen through the eyes of Raymond Orrey; his thoughts, his actions and their consequences are all viewed from inside his head. It’s a challenging and not always easy read – you’ll be rooting for little William and shouting at the narrator – but it is an accurate reflection of mental illness from the first page to the last when, finally, Orrey is confronted with the consequences of his actions.

Iain Maitland is the author of Sweet William published by Saraband Books on 16th November 2017
Life and death played out over 48 hours. A father desperate to be with his young son escapes from a secure psychiatric hospital, knowing he has just one chance for the two of them to start a new life together. His goal is to snatch the three-year-old - a diabetic who needs insulin to stay alive - and run away to France ... but first he must find the boy, evade his foster family and stay well clear of the police, already in pursuit. A real page-turner cut through with dark humour, Sweet William zeroes in on a potent mix: mental illness, a foster family under pressure, and an aggrieved father separated from his precious child.
Posted by Ayo Onatade at 07:00